Insurance advisors who are surveyed for Investment Executive‘s Insurance Advisors’ Report Card always have wide-ranging opinions regarding the insurance agencies through which they run their businesses, regardless of business model – and this year was no different.

Specifically, advisors who work through one of the five MGAs in the survey rated their MGA very highly this year; in fact, many of the ratings for the MGAs rose significantly (by half a point or more) year-over-year. In contrast, the majority of advisors at the dedicated sales agencies or at GWL were less enthusiastic about their firms.

Many of the independent advisors who run their businesses through an MGA noted that the MGA’s management makes an effort to keep advisors informed about what’s happening at the MGA and what it has to offer advisors. In addition, advisors praised their MGA for the support they receive – particularly from well-trained staff. 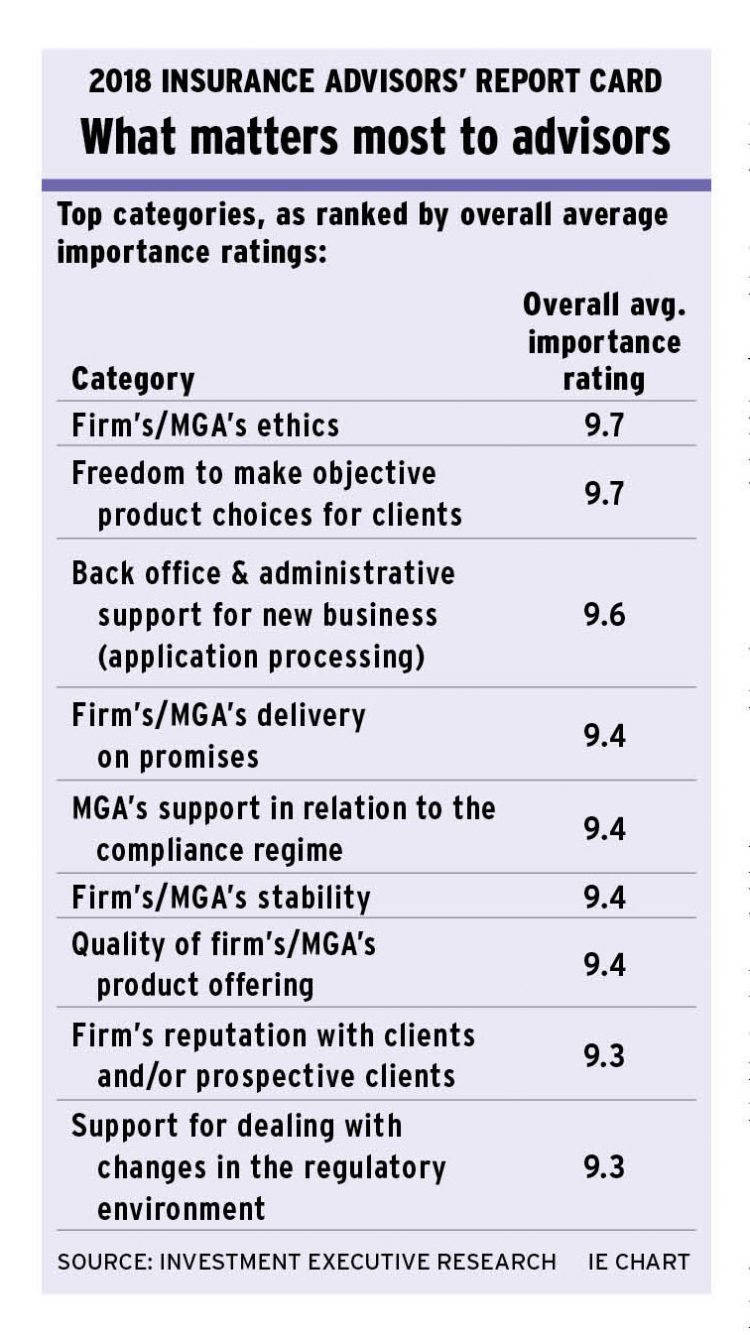 “They’re always there when we need them,” says an advisor in Ontario with Mississauga, Ont.-based IDC Worldsource Insurance Network Inc. “We can get through to people from the top down. They supply us with what we need.”

In contrast, advisors with most dedicated sales agencies and GWL often noted that communication with management was lacking. In addition, many of these advisors pointed out they’re often left stranded by support staff.

Specifically, Hub’s ratings improved by half a point or more in 11 categories this year while Sun Life’s and GWL’s ratings declined by that same margin in 20 categories and 21 categories, respectively. In addition, Hub’s “IE rating” – the average of all the performance ratings given to a firm, excluding the “overall rating by advisors” (which, in turn, is the rating advisors gave their firm as a whole) – rose by more than half a point. In contrast, both Sun Life’s and GWL’s IE ratings and overall ratings by advisors dropped by that margin year-over-year. (See story on page 9.)

In Hub’s case, many of the MGA’s advisors pointed to improved efforts in communicating and collaborating with advisors as the main reason for their increased satisfaction this year.

“They have great support [for advisors], products and people,” says a Hub advisor on the Prairies. “[Advisors] have access to everything.”

Conversely, advisors with GWL’s Wealth and Insurance Solutions Enterprise (WISE) network pointed out they often feel left in the dark about the changes related to the transition to the WISE network from the former Gold Key network as the reason for their dissatisfaction this year.

“I honestly don’t know what the [company’s strategic] focus is,” says an advisor in Ontario with GWL’s WISE network. “[GWL has] gone through so much change over the past two years. It’s not the same company it used to be.”

A matter in which there was a clear divide between the dedicated sales agencies and GWL on the one hand and the MGAs on the other related to the three back-office categories.

Notably, all of the dedicated sales agencies and GWL saw their ratings decrease by half a point or more in at least one of the “back office and administrative support” categories: “new business (application processing)”; “in-force policy owner services”; and “commissions support.”

In contrast, all MGAs received very favourable ratings in these categories – and four of the five MGAs saw their ratings improve by half a point or more in at least one of the three categories. (See story on page 11.)

In-force policy owner services were a particular thorn in the side of advisors at the dedicated sales agencies. The common theme: back offices often are understaffed with employees who are inexperienced, which leads to slow response times.

“I can get a hold of [staff] rather quickly, [but] there are certain policies they’re not aware of, so that could [take] two weeks [to sort out],” says an advisor in Ontario with Mississauga, Ont.-based RBC Life Insurance Co.

MGAs also appear to have the edge – albeit a small one – in categories such as “firm’s/MGA’s marketing support for advisor’s practice” and “ongoing training.”

For example, although the results for the marketing support category show that advisors at all the agencies were happier with their firm’s efforts year-over-year, four of the five MGAs were top performers in the category this year. In general, the advisors happiest with their firm’s marketing efforts praised their agency for providing financial support as well as relevant tools and expertise. (See story on page 12.)

“[The firm has] given me all the [marketing] material I need to be successful,” says a Hub advisor in Ontario. “[Clients] like to have tangible things [to read and go over], so this is important.”

Similarly, many advisors – particularly those who work through an MGA – were positive about the ongoing training they receive. In fact, two MGAs and London, Ont.-based dedicated sales agency Freedom 55 Financial – received ratings in the category that were higher by half a point or more year-over-year. (See story on page 12.)

Much like the reasons given for marketing support ratings, advisors appreciated having a range of options and resources available – from conferences and seminars to online courses – to stay on top of continuing education requirements.

“[The firm is] really good at putting on targeted [training] sessions for advisors that are relevant,” says an advisor in British Columbia with Kitchener, Ont.-based Financial Horizons Inc.

Regardless of the differences in the ratings that advisors gave their firm or the type of insurance agency they work through, advisors were unanimous, once again, in touting the importance of their agency’s ethics and their ability to run their businesses as they see fit. Indeed, the “firm’s/MGA’s ethics” and “freedom to make objective product choices for clients” categories received the two highest ratings for both overall average importance and overall average performance.

Advisors were confident that their insurance agencies are ethical – and this, in turn, allows advisors to act in the best interest of their clients – particularly in choosing products.

Says a Sun Life advisor in Ontario: “We pretty well [have] free rein to provide whatever we think is best for the client.”

Investment Executive’s (IE) annual Insurance Advisors’ Report Card aims to gauge how the advisors who work in the insurance industry feel about the firms through which they ply their trade.

Advisors were asked slightly different questions to reflect these firms’ business models. For example, advisors who work at dedicated sales agencies were asked to rate their “firm’s corporate culture” as they tend to work with other advisors and employees.

Advisors who work through MGAs, on the other hand, were not asked about corporate culture because these advisors are independent and run their own practices.

Meanwhile, Winnipeg-based Great-West Life Assurance Co. (GWL) is the sole PPGA in the Report Card. Under this model, advisors with the firm’s Wealth and Insurance Solutions Enterprise (WISE) network are independent but work exclusively through GWL. As in years past, these advisors and the advisors at the dedicated sales agencies were asked the same questions.

Regardless of the firms’ business models, every advisor surveyed for this Report Card was asked to provide two ratings for each relevant category included on the main ratings table (see page 8): one for their agency’s performance in that category and another for that category’s importance to the advisor’s business. Each score is on a scale of zero to 10, with zero meaning “poor” or “unimportant” and 10 meaning “excellent” or “very important.”

Furthermore, all advisors were asked to provide their thoughts on key industry trends in two supplementary questions.

In the first question, advisors were asked if they’re in favour of the Canadian Securities Administrators taking regulatory action to address the concerns related to the use of embedded commissions. In the second question, advisors were asked if they felt their insurance agency’s cybersecurity efforts are adequate to ensure that their data – as well as those of their clients – are protected properly.

Change in fortunes for three firms

Advisors are split on their back offices

Guidance from firms is appreciated by surveyed advisors

As the pandemic pushed insurers to adapt and grow, firms prioritized advisors’ needs

The advisors surveyed in 2021 were more satisfied, with even the lowest-rated firms seeing many areas of improvement