In fact, the results of this year’s Report Card reveal the retail brokerage business is in fine health overall. Advisors’ average assets under management (AUM) rose year-over-year, as did productivity. (Productivity is measured by AUM per client household.)

Indeed, the average advisor’s AUM rose to $139.6 million from $129.7 million year-over-year. These gains took place even though the size of the average client roster declined slightly, as advisors now serve an average of 177.6 client households, down from 182.3 last year.

This combination of increasing AUM and a modest decline in client households resulted in solid growth in advisors’ productivity. The average AUM/client household now is $1,043,135, up from $943,279 in 2017. 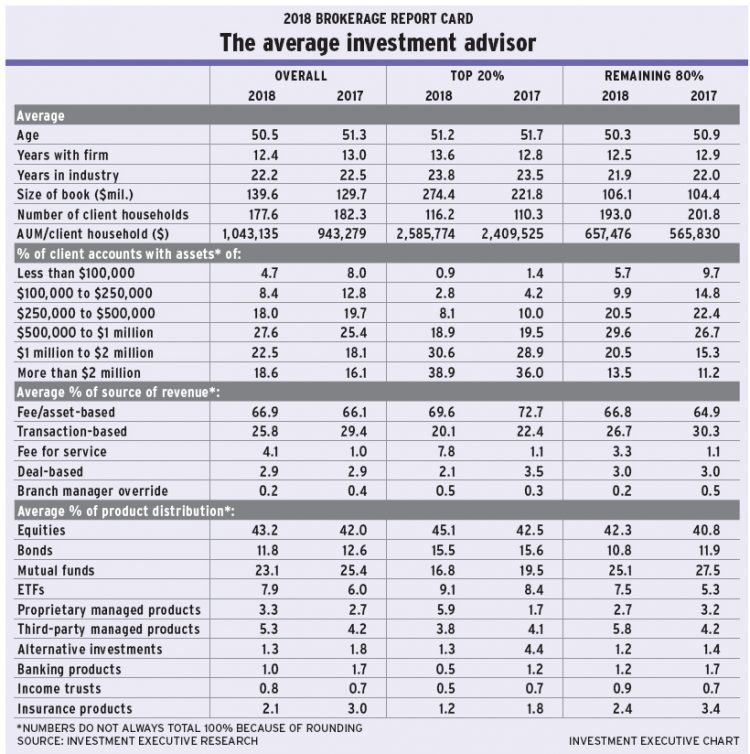 Although the growth in both average AUM and productivity is evident for both the top performers (defined as the top 20% of advisors, in terms of AUM/client household) and the remaining 80% of advisors, the underlying trends are quite different for the two segments of the advisor population.

For the top performers, growth in productivity was powered by strong growth in AUM, which was being fed, in part, by an increase in the number of clients. Conversely, for the remaining 80% of advisors, client numbers were down and the increase in AUM was slight year-over-year.

This increase in client household numbers for the top 20% of advisors undoubtedly accounted for some of the impressive AUM growth for this segment of the advisor population. Indeed, the account distribution data for this segment indicates that the clients they’ve added have accounts of $1 million or more.

This increase in the proportion of accounts that come in at the top end of the distribution range, combined with slightly higher client numbers, resulted in greater productivity for the industry’s top producers: $2.6 million in AUM/client household, up from $2.4 million last year.

The data on account distribution for the remaining 80% of advisors show they reduced the percentage of accounts in their books worth less than $500,000. In fact, accounts worth less than $250,000 were notably fewer year-over-year.

The notable increase in advisors’ reliance on fee-for-service arrangements suggests that advisors are turning to this compensation model amid increasing sensitivity to compensation-related conflicts of interest – and a growing desire to avoid those conflicts.

For example, the total population of advisors surveyed this year reported that 25.8% of their revenue came from transactions, down from 29.4% last year. The share of book for fee-/asset-based sources continued to edge higher, and reached 66.9% this year vs 66.1% from last year’s survey. But the proportion of revenue coming from fee-for-service arrangements jumped to 4.1% this year, up from just 1% in 2017.

For the remaining 80% of advisors, the reliance on fee-for-service revenue remained notably lower, at 3.3%. However, this still was a sharp increase compared with last year’s survey.

Some of the same concerns that are driving shifts in advisors’ revenue sources also may be motivating the evolution in asset allocations. The most notable change in advisors’ reported asset mix was a decline in their use of mutual funds, to 23.1% of their books from 25.4% year-over-year – with a simultaneous rise in the use of ETFs. (Those investments’ share of book increased to 7.9% from 6% year-over-year.)

The rise in the popularity of ETFs and decline for mutual funds came amid a general trend toward passive investing strategies and increasing attention to the conflicts that arise with the use of products that utilize embedded commissions structures. (See story on page 18.)