Since the pandemic took hold, household savings have surged, interest rates have plunged and housing markets have boomed.

In response to these forces, the businesses of bank-based financial advisors shifted significantly. After taking a one-year hiatus due to pandemic-related disruptions, Investment Executive’s 2021 Report Card on Banks found that average assets under management (AUM) for branch-based advisors and planners were essentially unchanged from 2019. However, the composition of advisors’ books, asset mixes and revenue changed dramatically.

For the advisors in this year’s Report Card, average book value came in at $121.1 million as of Dec. 31, 2020, virtually unchanged from the 2019 Report Card. (Data on assets, client households and productivity excludes Bank of Nova Scotia’s advisors because they serve assigned groups of clients out of a collective base and cannot provide individual book data).

The stagnation in average AUM occurred against the backdrop of strong gains in financial markets generally and a significant rise in household savings over the past year. While bankers seemingly didn’t capture either the market gains or the organic asset growth of 2020, their productivity continued to rise as household counts declined over the same period.

But the most dramatic changes revealed by this year’s research were in the reported asset mix of bank advisors’ books. (Product mix data for 2021, which is reported as a percentage of assets under management, excluded advisors from Bank of Nova Scotia; 2019 data included all bank respondents, but Scotiabank responses did not materially affect the figures.)

Overall, bank advisors swung sharply toward mutual funds and away from most other assets, particularly managed products. This year, bankers reported that almost two-thirds (64.7%) of their books were invested in mutual funds, up from just more than one-quarter (27.7%) two years ago.

The large jump in mutual fund allocations came at the expense of almost every other asset type, most notably among managed products such as wrap accounts (both proprietary and third-party), which collectively plunged to just 13.6% of the average book this year, down from 42.8% in 2019.

These major shifts in asset allocation may reflect a couple of disparate trends. Regulatory reforms, including the client-focused reforms, appear to be affecting banks’ product shelves. (See story.) At the same time, factors such as increasing concerns about investment costs, the plunge in interest rates and the intensified search for yield may have driven bankers toward mutual funds.

These shifts in asset allocation were accompanied by changes in advisor revenues. Although salary remained the primary revenue source for the average bank advisor, it accounted for 53.3% of an advisor’s overall compensation this year, down from 59.3% in 2019. Conversely, the next-largest revenue category — bonuses — rose to 26.1% of the average advisor’s revenues in 2021, up from 20.6% in 2019. Fee- or asset-based revenues contributed 12.3%, down from 15% in 2019.

The declining role of salary and rising importance of bonuses were more significant for the industry’s top performers. In 2019, two-thirds (65.6%) of top performers’ revenues came in the form of salary; this year, that was down to 55.9%. For the rest of the industry, salary accounted for approximately half of advisor revenues, slipping to 48.2% this year from 49.9% in 2019.

The top 20% of advisors’ books also showed distinct characteristics when it came to account distribution. Top advisors’ share of clients in the lowest-value account category (under $100,000) increased, rising to 5.4% in this year’s Report Card from 2.8% in 2019. Their share of clients in accounts worth more than $1 million also rose, to 29.6% this year from 21.3% two years ago.

The shifts in revenue mix, alongside dramatic changes in asset allocation, reveal how much the banking sector has evolved over the past two years, even as average assets have essentially remained unchanged. 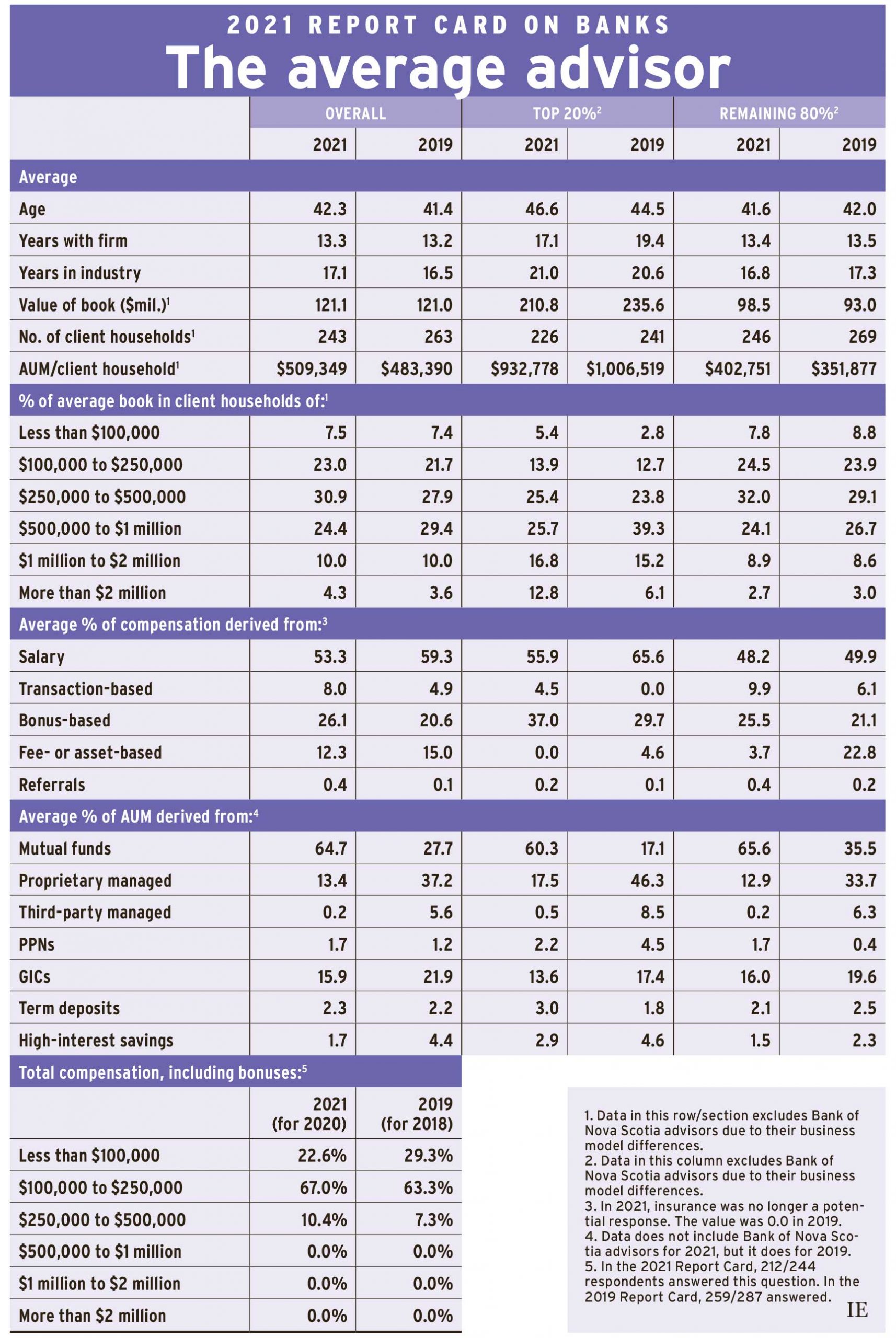 Some advisors frustrated by lack of planning support

Amid such conditions, Canadians now expect to need $1.7M in order to retire

A crucial measure of Canadians’ financial health has weakened, but together we can strengthen it