This article appears in the March 2022 issue of Investment Executive. Subscribe to the print edition, read the digital edition or read the articles online.

Most financial services companies were in good shape as 2022 began. Equities markets were coming off a second consecutive exceptional year and banks were well protected from loan losses.

The balance of 2022 is unlikely to be as positive. Russia’s invasion of Ukraine will slow global economic growth as sanctions against Russia take a bite out of global trade and fuel inflation.

For the quarters ended between Nov. 30 and Jan. 31, 24 of the 40 companies in Investment Executive’s Profit Survey had higher earnings than the previous year and two more reported positive net income compared to a loss. Just 13 companies reported lower profits than a year ago and only RF Capital Group Inc. was in a loss position.

The average year-over-year increase in net income for the 40 firms was 16.2%. But this gain mainly came from the banks and Brookfield Asset Management Inc. (BAM).

The banks booked almost $19 billion in loan-loss provisions (LLPs) when the pandemic hit, but they didn’t need that much and haven’t needed to add much since. In the quarter ended Jan. 31, LLPs amounted to only $385 million for the 12 deposit-taking institutions compared with the $1.5 billion–$2.5 billion that is usual when economic growth is healthy. BAM also had a huge $1.6-billion gain in net income. If LLPs were at normal levels and BAM was excluded, the average profit increase would have been only 1.6%.

Nonetheless, there was a flurry of increases to quarterly dividends: 11 in the most recent quarter and 13 in the previous quarter.

Some of the dividend increases were made to catch up following the regulatory prohibition against banks and insurers increasing dividends during the pandemic. The restriction was lifted in November 2021 and all banks except HSBC Bank Canada and VersaBank have since upped their dividends. This includes a reinstatement of dividends by Home Capital Group Inc.

All the lifecos have raised their dividends, and four did so in the previous quarter. This quarter, E-L Financial included a special dividend of $25 on top of its regular $2.50 payout.

Intact Financial Corp. is the only property & casualty or mortgage insurer that pays quarterly dividends. It raised its dividend to $1 from 91¢ this quarter.

ECN Capital Corp.’s dividend fell to 1¢ from 3¢, but it paid a special distribution of $7.50 a share related to the sale of its service finance business in December 2021.

Home Capital’s net income dropped by 6.4% year over year, making it the only deposit-taking institution with lower net income than a year earlier. That was primarily because it added $1 billion in LLPs this quarter but reduced LLPs by $7.7 billion in the corresponding quarter in 2020.

Year-over-year earnings gains among the other 11 banks ranged from 5.2% at VersaBank to 49.6% at HSBC.

Eight of the 12 companies increased their LLPs in the quarter. Reductions at the other four were by $99 million at Bank of Montreal, $1.4 million at Equitable, $8 billion at HSBC and $2 million at National Bank of Canada.

Equitable announced a major acquisition: Saskatoon-based Concentra, a mid-market digital bank with $11.3 billion in assets that rebranded as Wyth Financial in 2021. The deal is expected to close in the second half of this year and would result in the country’s seventh-largest bank.

The big banks are keeping a sharp eye on the Russian invasion of Ukraine. They are also concerned about U.S./China relations and the emergence of new fast-transmitting Covid variants.

E-L has a large portfolio of investments unrelated to its insurance operations, so its earnings swing due to changes in the fair value of those investments. In this quarter, the gain in fair value for that portfolio was $303 million, which was $224 million lower than the $527-million increase in the corresponding quarter in 2020.

GWL’s financial report said its base earnings, which “reflects management’s view of the underlying business performance,” were up by 11%.

Only Co-operators General Insurance Co. had a decline in net income, with the other four reporting higher earnings.

Co-operators was affected by the “catastrophic flooding in British Columbia, impacting the commercial, farm and home lines of business,” according to its latest financial report.

Tiny ICPEI Holdings Inc. had strong underwriting results. It has received a licence to operate in Ontario and has applied for one in Alberta.

Intact’s large increases in assets, revenue and net income were the result of its large acquisition of U.K.-based RSA Insurance Group plc.

Results were mixed in this sector as well. The group is dominated by BAM and, without its huge increase, the other eight firms had an average earnings gain of only 4.9%.

Fiera Capital Corp., IGM Financial Inc. and Sprott Inc. were the other three firms with earnings gains. AGF Management Ltd., CI Financial Corp., Guardian and Stone Investment Group Ltd. all had declines and RF was in a loss position.

CI has announced a few acquisitions. One is California-based Corient Capital Partners LLC, an ultra-high-net-worth firm overseeing US$5 billion in assets. The deal is expected to close in the second quarter. CI also is buying a minority stake in Toronto-based Newton Crypto Ltd.

Canaccord and Oppenheimer Holdings Inc. both had declines in net income but Canaccord’s was a small 1.2% while Oppenheimer’s dropped by 23.2%. Oppenheimer’s quarterly financial report said it was “significantly impacted by a reduction in incentive fee income from alternative investments.”

TMX’s initial listing fees more than doubled and revenue was also pushed up by its August 2021 acquisition of AST Trust Company (Canada).

Desjardins Group saw a 55.1% drop in net income because of a $6-million loss by its wealth management and life and health division, which had net income of $249 million in the quarter a year earlier. Its financial report said the deterioration of earnings was “mainly due to the unfavourable impacts of changes in actuarial assumptions.” 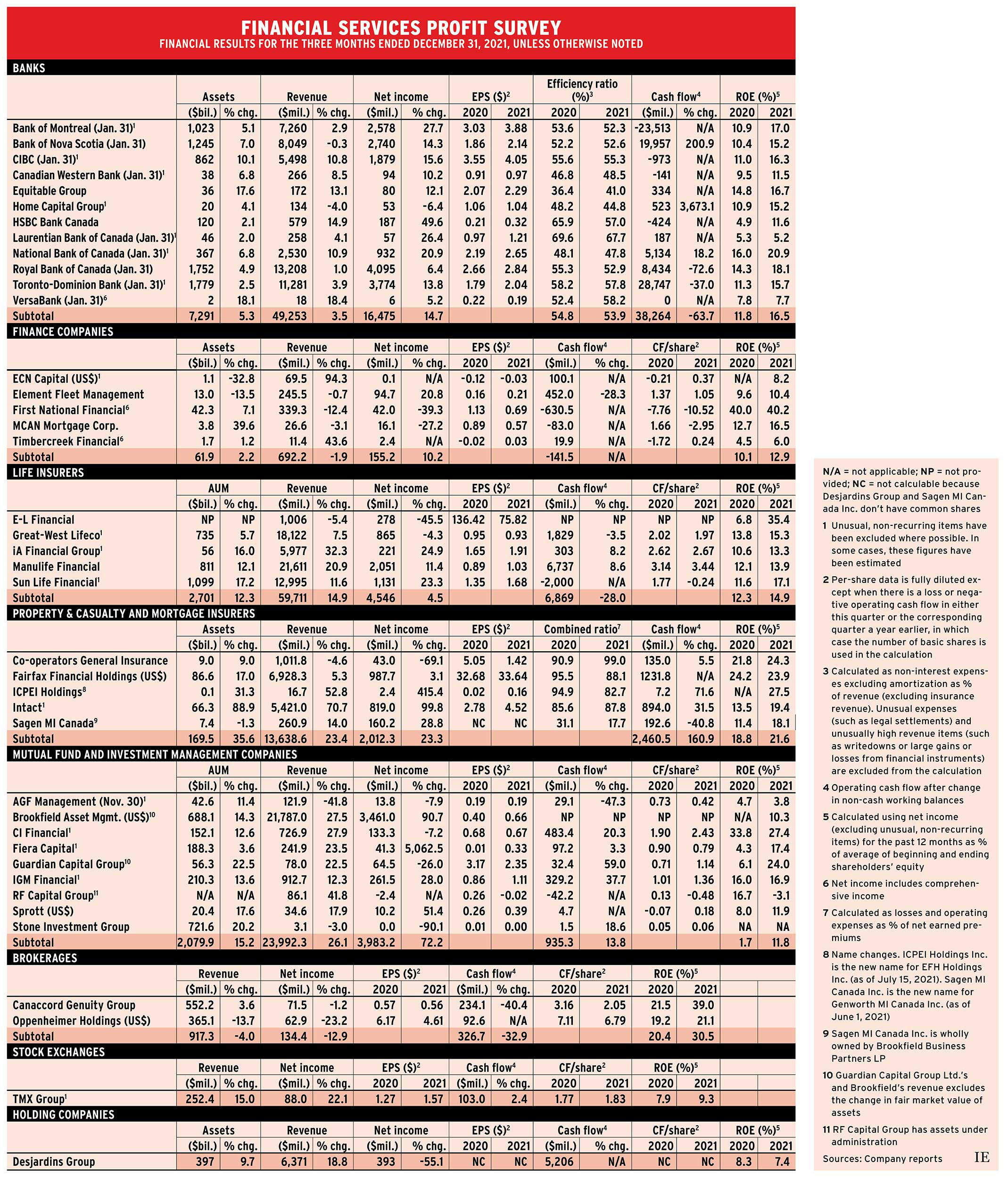 Hazards to watch for this decade