This article appears in the Oct. 2022 issue of Investment Executive. Subscribe to the print edition, read the digital edition or read the articles online.

Difficult market conditions led to financial services firms reporting lower net income in the most recent quarter than they did a year earlier. On average, net income was down by 25.3% for the 43 companies in Investment Executive’s quarterly Profit Survey.

Investors are nervous about the possibility of recession as central banks raise interest rates. Geopolitical tensions are high, given the Russia-Ukraine war and the spectre of famine in parts of Africa and the Middle East.

Only 14 companies reported higher income year over year, while 22 saw drops and five reported losses in the quarters ended between May 31 and July 31. These figures exclude the results of Sagen MI Canada Inc. and Empire Life Insurance Co., which are consolidated in those of Brookfield Asset Management Inc. (BAM) and E-L Financial Corp., respectively.

Bear markets hurt brokerages: Oppenheimer Holdings Inc. reported a loss while Canaccord Genuity Corp.’s net income was down. Most of the mutual fund and investment management firms also reported lower net income or a loss, while most insurers saw their bottom lines deteriorate.

However, the banks’ net income was only down by an average of 4.8%. Hits to the capital markets divisions were offset by revenue from personal and commercial banking because their net interest margins — the difference between what they charge on loans and what they pay on deposits — rose along with interest rates. This happened even as the banks raised their loan-loss provisions (LLPs) in anticipation of a possible recession.

The only sectors with increased average earnings were finance companies, collectively up by 9.3%, and TMX Group Ltd., the sole exchange company, up by 33.9%.

With all this uncertainty, only EQB Inc. (formerly Equitable Group Inc.) raised its quarterly dividend, to 31¢ from 29¢.

Only three banks had higher earnings this quarter — and the increases weren’t large. Bank of Nova Scotia’s earnings were up by 2% year over year, Toronto-Dominion Bank was up by 5.4% and VersaBank was up by 5.2%.

Bank of Montreal’s earnings were up in only personal and commercial banking. CIBC and National Bank of Canada both reported 1.5% drops in net income. CIBC had an increase in Canadian commercial banking and wealth management, and was down a little in other divisions. National Bank had a decline in U.S. specialty finance and international finance, and was up elsewhere.

Royal Bank of Canada had a big decrease in its capital markets division and smaller drops in Canadian banking and insurance. RBC’s wealth management division and its investor and treasury services were up.

The 12 banks collectively increased their LLPs to $1.7 billion, up from $242 million the previous quarter and a drop of $455 million from a year earlier. This quarter’s LLPs are still at the low end of what’s expected when the economy is growing at a healthy rate.

Element Fleet Management Corp. and First National Financial Corp. are the biggest companies in the group (by assets) and reported $288.1 million and $251.9 million, respectively, in revenue. Both had net income increases. That performance more than offset the large declines in net income for Accord Financial Corp. (92.6%), MCAN Mortgage Group (78.5%) and ECN Capital Corp. (46.9%).

One of the peculiarities of life insurance financial accounting is that changes in the fair value of the assets required to support long-term liabilities are included in revenue, which can actually result in negative revenue. That was the case for Empire Life and Manulife Financial Corp. this quarter. For the other three companies, the changes in fair value led to massive declines in revenue.

Nevertheless, four of the five companies reported lower net income and Great-West Lifeco Inc.’s net income was up by only 1.5%. Manulife and Sun Life Financial Inc. had large earnings declines of 62.8% and 23.2%, respectively.

Manulife attributed its decline to the “direct impact of equity markets and interest rates and variable annuity guarantee liabilities.” The company excludes these areas from “core” earnings, which were down by only 7.1%. In Sun Life’s case, excluding market-related impacts would have resulted in a tiny 0.2% increase.

Fairfax Financial Holdings Ltd.uses sophisticated techniques, including derivatives, to try to enhance returns on the assets backing up its insurance liabilities. This can lead to dramatic swings in the fair value of its investments. This quarter, fair value fell by $1.5 billion compared with a gain of $1.3 billion in the quarter a year earlier. Since Fairfax’s deterioration outweighed Intact’s gain, the six-company group reported a 75.3% drop in net income.

RF Capital Group Inc. had a huge 32,140% increase in net income because it reported only $5,000 in net income for Q2 2021. The company is turning the corner toward sustainable profitability.

AGF Management Ltd.’s earnings rose by 100.7%, mainly due to a $4.7-million gain in “fair value adjustment and distributions related to long-term investments” compared with a $482,000 loss a year earlier.

Guardian’s loss was due to fair value losses in its large corporate portfolio amounting to $90.1 million, compared with a gain of $56.5 million in Q2 2021.

TMX Group had a 33.9% increase in earnings in part because it includes BOX Holdings Group LLC in its results as of Jan. 3. 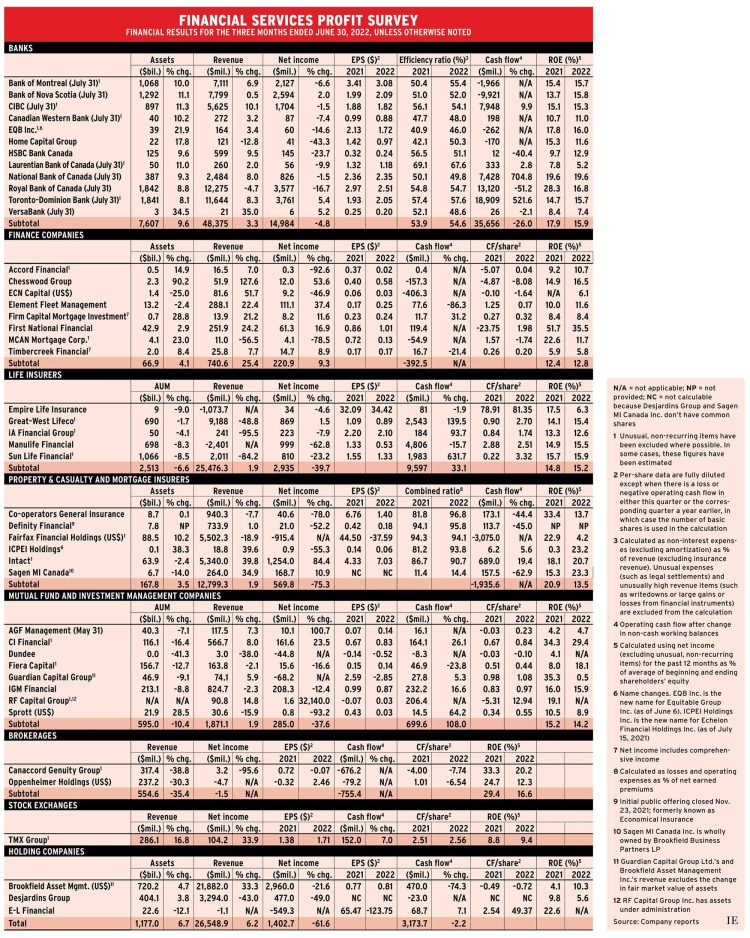 Foreign exchange can throw off your tax-loss selling plans

A client example illustrates the importance of currency calculations