How does a deadly pandemic affect the insurance advisory business? For the advisors who responded to the latest edition of Investment Executive’s Insurance Advisors’ Report Card survey, books of business get bigger, as advisors focus on their core insurance business.

After a year’s absence due to Covid-19, the Report Card is back for 2021, revealing an industry that has changed since 2019.

Average assets under management (AUM) for investment products soared, rising to $68.4 million in this year’s Report Card (reported as of Dec. 31, 2020), from $41.9 million in 2019. While average assets were up by more than 60% over the past two years, only about one-third of respondents provided data on AUM. For most advisors, insurance remained the primary line of business.

Therefore, we now rely on advisors’ reported compensation to define the sector’s top performers, rather than AUM per client household as in other Report Cards. Advisors who reported making more than $500,000 per year are classified as top performers.

Back in 2019, that cohort represented 18.1% of the advisors in our survey. This year, only 10.8% of respondents reported making over $500,000 per year, which gave us a narrower sample when comparing the top performers against the rest of the industry.

These declines at the top end of the compensation scale were mirrored at the bottom end, as the share of advisors making less than $50,000 per year was down notably from two years ago (dropping to 5.6% from 8.7%).

The average top performer had more than 28 years of industry experience, compared with 19.4 years for the rest of the industry. In other words, top performers were six years older on average than other advisors, and had been in the business nine years longer.

For the rest of the industry, renewals remained the second-most important source of revenue, accounting for 27.4% of the average rep’s compensation, down slightly from 28.8% in 2019. Fee- and asset-based sources edged higher to 19.6% of the average book, from 17.7% two years ago.

Despite these various compensation mixes, advisors across the industry reported higher allocations to core life insurance products. Overall, permanent life accounted for 35.4% of the average book, up from 30.4% in 2019. Term life represented 29.7% of the average book, up from 27.8%. At the same time, allocations to segregated funds dropped to 14.4% this year, from 19.0% in 2019.

This rise in core insurance product allocations throughout the industry suggests insurance was likely a top priority for both reps and their clients amid a pandemic that forced many Canadians to consider their own mortality. 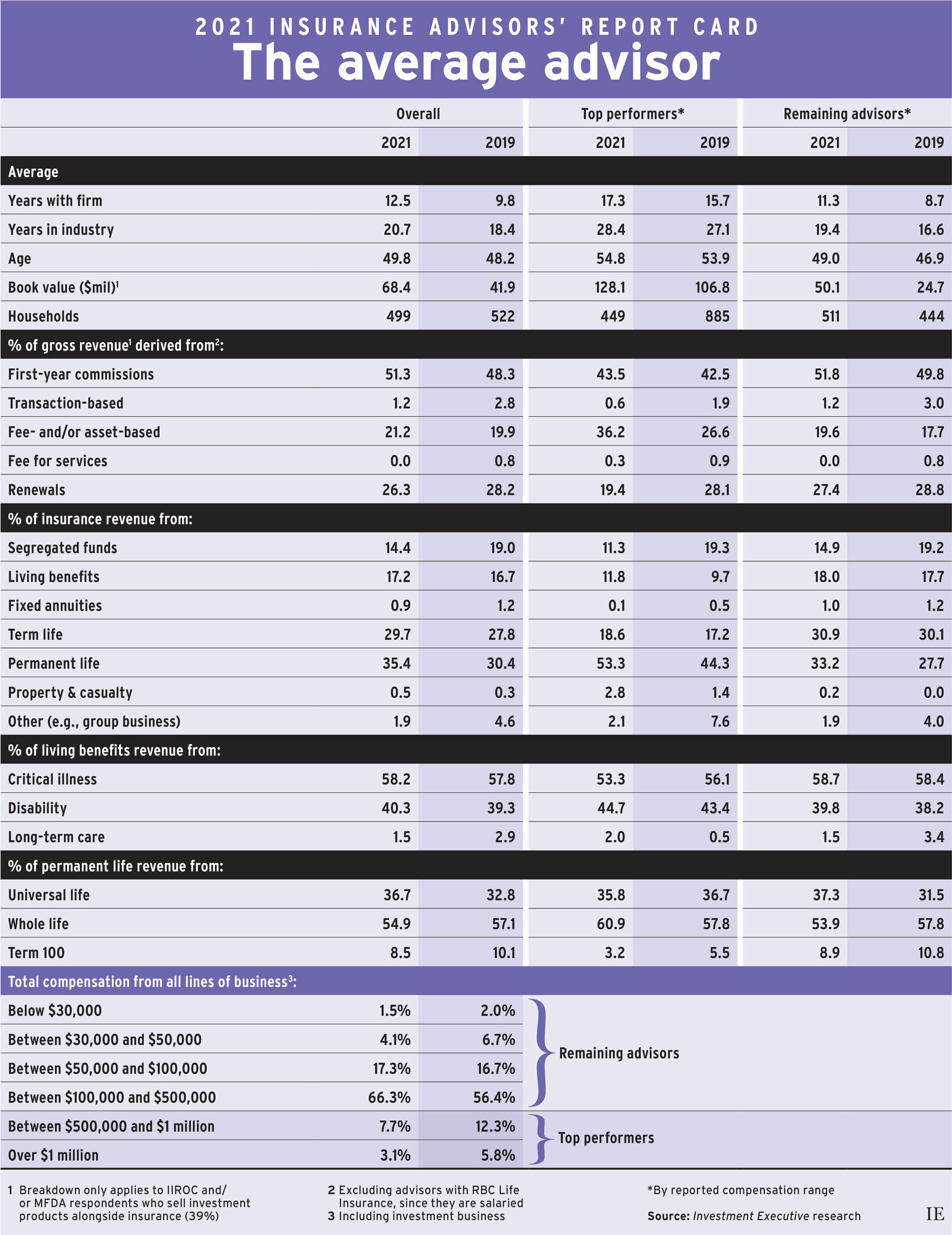 Guidance from firms is appreciated by surveyed advisors

As the pandemic pushed insurers to adapt and grow, firms prioritized advisors’ needs

The advisors surveyed in 2021 were more satisfied, with even the lowest-rated firms seeing many areas of improvement