This article appears in the December 2022 issue of Investment Executive. Subscribe to the print edition, read the digital edition or read the articles online.

The single self-regulatory organization will launch in January, ending the two-SRO era that has prevailed throughout the maturation of the retail investment business.

The Canadian Securities Administrators (CSA) have blessed the merger of the Mutual Fund Dealers Association of Canada (MFDA) and the Investment Industry Regulatory Organization of Canada (IIROC) into a yet to be named single SRO. The CSA also approved combining the industry contingency funds into what will continue to be known as the Canadian Investor Protection Fund.

The new SRO will launch on Jan. 1, 2023, in line with the deadline set by the CSA last year. The new SRO will operate under an interim set of rules and an interim fee model that will largely maintain prevailing regulations until the rule book and fee structure are redeveloped.

In the meantime, the new SRO aims to provide continuity from the system of oversight that has prevailed for more than 20 years in the MFDA’s case (it incorporated in 1998 and began accepting members in 2002) and 15 years for IIROC (created in 2008 by the merger of the Investment Dealers Association of Canada and Market Regulation Services Inc.).

When the MFDA began operating, the fund industry managed about $400 billion in assets. Initially, more than 200 fund dealers joined the SRO, fielding about 55,000 reps.

By late 2021, fund assets had ballooned past $2 trillion, before sliding back this year amid market volatility. Over the same period, the number of fund dealers declined by more than half, even as the number of mutual fund reps climbed to more than 80,000 — reflecting both consolidation among independent dealers and the growing dominance of banks.

By comparison, there are only about 30,000 full-service financial advisors at IIROC firms and 174 investment dealers today versus just over 200 investment dealers back in 2008. Yet the number of markets overseen by IIROC has multiplied as the trading landscape has become increasingly fragmented.

The industry also has evolved from a regulatory point of view. Prior to the formation of the MFDA, fund dealers were directly overseen by provincial regulators. That meant they faced little compliance or enforcement activity due to the commissions’ lack of resources and broad responsibilities. This lack of oversight prompted the creation of the MFDA following a pair of seminal reports on the fast-growing fund industry tabled by former Ontario Securities Commission commissioner Glorianne Stromberg in the 1990s.

At the time, Stromberg recommended creating a single SRO to cover all securities dealing and financial advice, not just mutual funds. In her 1998 report, Stromberg argued that focusing regulation around products rather than advice and client needs would inflict both direct costs and opportunity costs on investors.

“A failure to rationalize the regulatory and self-regulatory system will involve real and immediate costs (both in the short term and in the long term) which ultimately will be paid for by consumer/investors,” Stromberg’s report warned.

More than two decades later, that rationalization of self-regulation is happening. Initially, however, not much will change when the interim rules take effect on Jan. 1. That said, those rules will allow some benefits of amalgamation to materialize. Dually licensed firms will be able to employ mutual fund reps who don’t have to upgrade their proficiencies, and reps will be able to use directed commission structures, which currently are allowed under the MFDA but not IIROC. Fund dealers and investment dealers will have more flexibility to enter into introducing/carrying arrangements. Affiliated firms will be able to move accounts internally without repapering those accounts.

Longer term, the new SRO will develop a consolidated rule book that regulates similar activities the same way, regardless of firm type. The new SRO will have two member categories: dealers (including both IIROC and MFDA dealers) and marketplaces (the trading venues currently overseen by IIROC).

Developing a new rule book will involve feedback from both the industry and the public. Regarding the latter, the new SRO must form both an independent investor advisory panel and an investor office to speak up for investors; the SRO’s advisory committees also are expected to include investor representatives.

Furthermore, the new SRO’s executive compensation structure must be designed to link the pay of senior management with the fulfilment of the SRO’s public interest goals. And the public-interest commitment must form part of the training for the new regulator’s senior management, directors and committee members.

A uniform approach to compliance and enforcement also will be on the new SRO’s agenda.

“The intention is to find convergence on a risk-based and consistently applied approach to principles-based rules, compliance and enforcement,” IIROC and the MFDA stated in their application to the CSA for approval of the new SRO.

Continuing education requirements won’t change much either. MFDA requirements will continue to apply to fund reps and IIROC requirements to investment dealer reps, but the long-term goal is for a harmonized program.

The other major area to be redeveloped is the fee structure. Existing dealer fees for fiscal 2023 will be charged once the new SRO launches and the fees for fiscal 2024 will be set in March 2023, when the regulator’s budget is approved.

The interim model will temporarily reduce fees for small dealers. The minimum fee charged to fund dealers will drop to $1,500 and the portion of fees charged on a firm’s assets under administration below $1 billion will decrease by 50%. Similarly, the minimum fee for investment dealers will fall, as will revenue-based rates. These lower fees are anticipated to be in place for two years or until the new fee model is adopted.

However, the regulators also will introduce a fee to cover most of the cost of integrating the SROs — a task that’s expected to total between $25 million and $38 million. The new fee will only be charged to dually registered dealers, which are expected to be the primary beneficiaries of the new SRO structure. The fee will be charged over three to five years beginning in fiscal 2024. 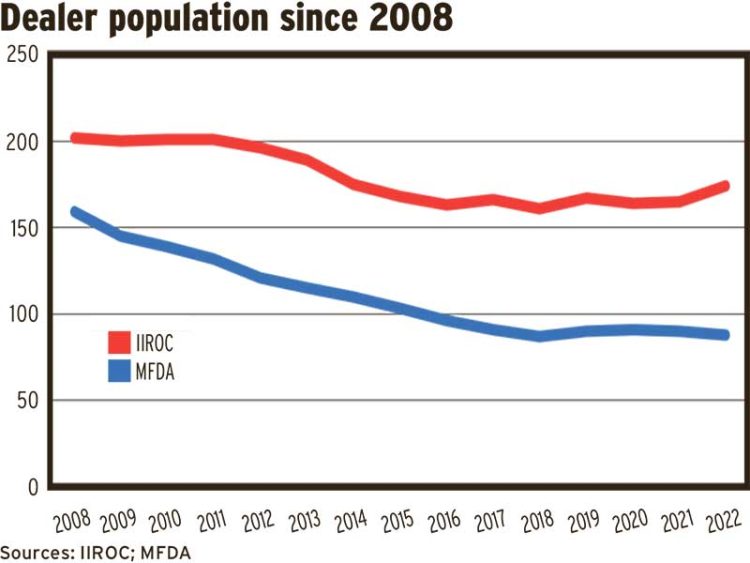 SRO merger offers a host of advantages for dual-registered firms

A contrarian approach to markets