Advisors across all channels included in the 2019 Report Card series are eager to earn more designations – and they’re looking to their firms for support.

Advisors not only wanted better training in relation to learning about and getting designations, but also want compensation for completing industry courses and support afterward.

“They keep us informed [about regulatory changes], but don’t support us in moving forward. There’s a little bit of continuing education but no support for new designations,” says one retail bank advisor in Alberta with Toronto-based Bank of Montreal (BMO). In an email to Investment Executive, a BMO representative said all of the retail bank financial planners are qualified professionals who “have studied [a] financial planning curriculum and passed certain tests.” 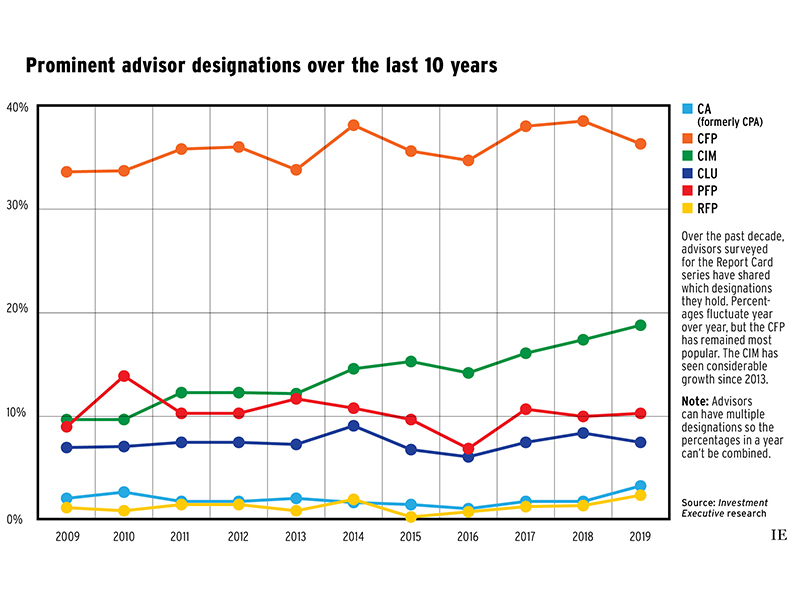 Once you’ve completed courses, “there’s no support,” says an advisor in B.C. with independent Vancouver-based brokerage Odlum Brown Ltd. “[It’s just] ‘here’s your designation’ and you sort of do your own thing; [there’s] no guidance, structure.”

Kim Abbott, vice president and director at Odlum Brown, says, “We fully support those with newly acquired education and designations.” Financial support is offered for required industry courses and, through partnerships, the firm helps staff seek designations such as certified professional consultant on aging.

The advisor comments about training support form part of a trend that’s persisted over the past decade within the Report Card series.

For instance, a dealer advisor in Ontario said in 2011, “I want more training for professional designations, such as the CFP [certified financial planner]. Our training is mostly about products and it’s not adequate.”

Also in 2011, an insurance advisor in Atlantic Canada said, “The firm provides in-house training on some level but to take additional courses […], the firm doesn’t cover any cost. Other firms do.”

When it comes to which credentials were most popular, the 2019 Report Card results show that the top three were the CFP (36.3%), chartered investment manager (CIM; 18.8%) and fellow of the Canadian Securities Institute (FCSI; 10.7%), followed closely by the personal financial planner designation (PFP; 10.3%).

The CFP designation was most prominent in the dealer channel, with more than half of those respondents (50.6%) holding it. However, the percentage of advisors surveyed with that designation across all industry channels has generally climbed over the past 10 years: in 2009, only 33.6% of respondents had their CFP.

This increase is unsurprising, since the industry is embracing financial planning as an important value-added service. The value of the CFP could soon be codified into law as well, given that the Ontario government pledged in its 2019 budget to move forward with title reforms that would require anyone calling themselves a “financial planner” to hold an appropriate credential.

One respondent in Ontario with Quebec City-based Industrial Alliance Securities Inc. says the “one harmonized designation should be [the] CFP. Period. [I] don’t think you should be [an advisor] without the CFP.”

Respondents and some firms have long focused on upping their holistic planning game. In 2008, for example, a dealer advisor in the Prairies said, “The firm encourages all advisors to get a CFP designation. In doing that, there is a code of ethics attached that spills over to the firm.”

As that widening satisfaction gap (the amount by which a category’s importance rating exceeds its performance rating) shows, firms still need to improve their financial planning support to please advisors.

Investment planning designations are important too. In particular, the CIM designation has seen considerable growth. In 2009, 9.7% of Report Card respondents had the designation; that proportion has jumped to 18.8% in 2019. Growth was most notable in the brokerage channel, with only 20.2% of advisors having gained that designation in 2009 vs 45% holding it in 2019 – perhaps to meet increasing demand for discretionary portfolio management.

Conversely, in the retail bank channel, where most respondents are mutual fund-licensed, only 8.1% of advisors had their CIM in 2009 (when credit union advisors were also included). That percentage dropped to 5.6% in 2019.

The average performance rating for the “support for developing an investment plan for clients” category – first introduced into the Report Card series in 2012 – has remained fairly static in comparison. The category was rated 8.0 in 2019 and 2018, and no lower than 7.8 over the past seven years.

The importance rating for that category has grown, however, to 8.8 from 8.1 over the same period. The 2019 satisfaction gap was 0.8, suggesting that firms may not be supporting advisors who want to create investment plans sufficiently.

Whichever way firms aim to offer educational support and resources, crafting a strategy is key. As an advisor in Ontario with Toronto-based bank-owned brokerage BMO Nesbitt Burns Inc. says, “The industry has an obligation to improve the standards as a whole. The Canadian Securities Course isn’t hard enough. We have to have better people, and that comes from stronger vetting. You can get paid like a brain surgeon, so you maybe should be educated.”

Where the industry is succeeding, and falling short

Surge in AUM and compensation for frontline advisors

Seasoned advisors are on the move

Tax debts and the prescribed rate