This article appears in the March 2021 issue of Investment Executive. Subscribe to the print edition, read the digital edition or read the articles online.

The investment story of 2020 was one of surprises: how quickly equities fell in March and then how quickly they recovered, with the S&P 500 composite index back to pre-Covid levels in August and up by 16.3% on the year as a whole.

A few mega tech-related growth stocks led the recovery until the fourth quarter of 2020, when investors, spurred by the approval of Covid vaccines, began buying value stocks such as energy and financials — a trend that has continued this year.

This trend to value could be sustained, as inflation is already edging upward. Upward price pressure tends to mute the appetite for growth stocks as the possibility of higher interest rates dampens their earnings potential.

But value investing didn’t pay off for most of last year. At Empire Life Insurance Co. in Kingston, Ont., all fund portfolio managers use the value style. That resulted in only 10.4% of Empire Life’s long-term assets under management (AUM) in funds ranked in the first or second quartile for the year ended Dec. 31, 2020, according to Morningstar Canada data.

Here’s a look at some of the seg fund families in more detail:

RBC Global Asset Management. Although the bank’s seg fund family has just $2 billion in AUM, its investment performance in 2020 was similar to that of its $411-billion mutual fund family. (See “Pandemic revealed benefits of stock-picking” in the February issue.)

One of the most successful Manulife seg funds in 2020 was the Manulife Monthly High Income Fund. The fund benefited from larger exposure to the U.S. than many of its peers. Holdings that did well include Toronto-based Constellation Software Inc. and Microsoft Corp., up by 40% and 62%, respectively. (All individual stock returns are from March 20 to Dec. 31.)

Even bigger gainers included Tesla Inc. and Arizona-based used-car company Carvana Co., both up by more than 700%; New York–based Peloton Interactive Inc., up by 559%; Roku Inc., a California-based streaming service that was up by 336%; and Ottawa-based Shopify Inc., up by 227%. Wilson said equities with such extreme increases risk big pullbacks, but that the income fund’s portfolio managers were comfortable that the stocks they owned “wouldn’t pull back as much.”

Like many experts, Wilson said the shift to value investing could continue, especially if interest rates rise in response to higher inflation. Such a shift wouldn’t worry him — the Manulife seg fund lineup includes all investment styles, so if one is struggling, others tend to do well.

Desjardins “goes through a rigorous selection process for both internal and external fund managers,” Girard said. He added that the managers “did not panic when markets dropped in March, maintaining equity exposure or adding to equity exposure when it was a good time to buy at reasonable prices.”

La Capitale Insurance and Financial Services and SSQ Insurance. The mandates for these two families focus on investing for the long-term. The SSQ family is the more value-oriented of the two, which could explain its slightly lower percentage of AUM in above-average performing funds (65.4% vs. 70.3% for La Capitale).

The parent companies of these two families merged in a deal that closed July 1, 2020. The new company, based in Quebec City, is Beneva Inc., which eventually will offer one comprehensive portfolio of products.

Contributors at SSQ included the SSQ Fisher Emerging Markets Fund and the SSQ Carnegie International Equity Fund, which both ranked in the first quartile.

The La Capitale and SSQ funds are expected to be fully invested, given their long-term horizon, so mandates limit the amount of cash they can hold. Nevertheless, some portfolio managers had enough flexibility to buy good stocks at bargain prices last March, said Michael Rogers, senior vice-president of brokerage distribution networks at Beneva.

All portfolio managers for both families are external, and include Dynamic Funds, Fidelity Investments Canada ULC, AGF Management Ltd. and Fiera Capital Corp.

Industrial Alliance. Pierre Payeur, senior vice-president with Industrial Alliance Investment Management Inc., said asset allocation was important in 2020. The firm’s managers were “quick to reduce equity exposure or reposition portfolios when stocks started to decrease in value and to readjust as the market turned.” The market downturn also provided opportunities to purchase companies that “had previously been deemed off the radar because they were too expensive.”

In Canada, small-cap companies contributed to performance in 2020 with a very strong fourth quarter. One standout holding was Toronto-based Dye & Durham Ltd., a cloud-based software and technology solutions provider. The company went public on July 17, 2020, and its price was up by 340% at the end of the year.

Payeur warned that “we’re not out of the woods.” There could be more waves of Covid and with high equities valuations, “there is potential for a pause or some reversal.” Another potential concern is inflation: “We are seeing some rise in inflation expectations, which could cause longer-term interest rates to rise and potentially impact the economy.”

Canada Life has offered a new single shelf of segregated funds since late 2019, which includes 75 best-of-class funds from the Great-West Life (GWL), London Life and Canada Life shelves. All funds are managed by the same investment management service.

London Life’s and GWL’s seg funds are closed to new clients, although existing clients can purchase additional units in funds within the families. Canada Life seg funds not on the new shelf were “soft capped” to new business.

In 2020, the GWL seg fund lineup had the highest asset-weighted performance of the three shelves, with 53.7% of AUM performing above median. AUM was more evenly distributed across GWL’s lineup compared with Canada Life’s shelf, which added several new funds that affected asset-weighted relative performance, MacLellan said.

London Life finished the year with 46.1% of AUM held in above-average funds. Performance was influenced by the shelf’s higher concentration in funds-of-funds. These solutions are positioned as “all-weather” strategies, which held up particularly well in the first quarter of 2020 due to the funds’ focus on downside protection, MacLellan said.

Empire Life Insurance Co. This fund family had weak performance in the first half but very strong performance in the second half, which has continued this year, said Ian Hardacre, senior vice-president and chief investment officer.

“We are now seeing a lot of discussion about a rotation to value,” Hardacre said. Energy and financials have done well since the vaccine announcements in the fall, and the prospect of rising inflation could fuel further interest in those stocks. Both sectors generally do well in a reflationary environment, which can be a struggle for growth stocks.

Hardacre also noted that the seg fund family’s performance was better than it appears: the four large funds, all with around $1.1 billion in AUM, were ranked in the third quartile, with some versions close to ranking in the second quartile. A small performance bump would have pushed them into second quartile. 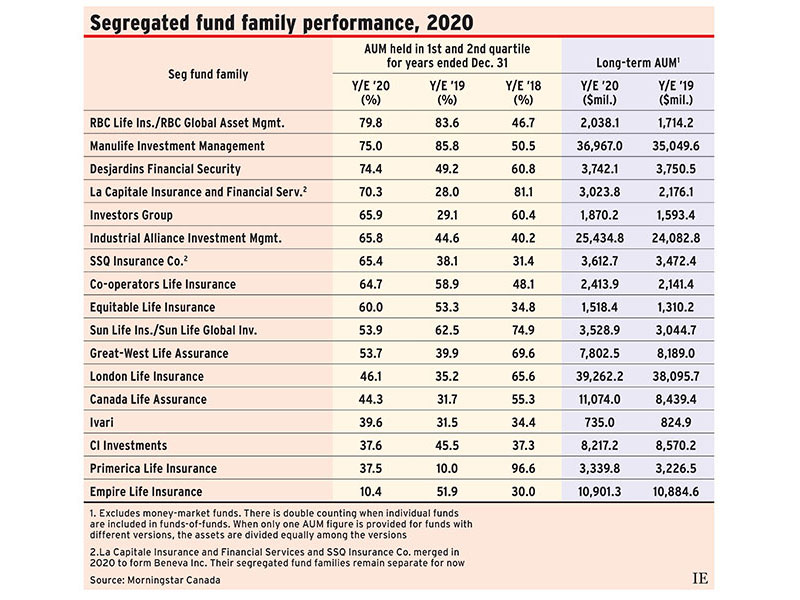 IG’s new investment strategist has a plan for inflation