This article appears in the February 2021 issue of Investment Executive. Subscribe to the print edition, read the digital edition or read the articles online.

Despite the pandemic, 2020 turned out to be a good year for equities. When markets are volatile, there are lots of opportunities to pick up bargains that can enhance returns.

Manulife Investment Management’s mutual fund family led in investment performance for the year ended Dec. 31, 2020, with 87.9% of long-term assets under management (AUM) held in funds ranked in the first or second quartile by Morningstar Canada. (All companies are Toronto-based unless otherwise noted.)

“Our [portfolio] managers deployed some cash in March to buy really good names at discounted prices,” said Sanjiv Juthani, head of product management at Manulife. The firm focuses on bottom-up stock-picking and “even with the potential for short-term market pain, our managers don’t make macroeconomic bets,” Juthani said.

When Covid-19 hit, no one knew what the markets would do. “Equities could have gone down by 50%, up by 50% or anywhere in between,” said Paul Moroz, chief investment officer at Calgary-based Mawer Investment Management Ltd., which had 80.4% of its AUM in funds with above-average returns.

Following Manulife were Fidelity Investments Canada ULC (with 83.6% of AUM held in funds with above-average performance), RBC Global Asset Management Inc. (80.6%), Mawer (80.4%) and Mackenzie Investments (77.9%). All took advantage of the bargains during the March plunge.

Near the other end of the spectrum, IG Wealth Management Inc. had 25.1% of AUM in funds with above-average performance.

Here’s a look at some of the mutual fund families in more detail:

Manulife Investment Management. Juthani said Manulife’s managers were already well positioned to weather the storm, with their focus on downside protection, a well-diversified lineup of products and their bottom-up stock-picking.

Some of Manulife’s picks since March included Canadian Pacific Railway Ltd. and Thermo Fisher Scientific Inc., a scientific product manufacturer based in Massachusetts. Demand for both companies’ products and services increased during the pandemic, Juthani said.

The Manulife Dividend Income Fund did extremely well, with a return of about 22% for the year — an example of how active investment management can add value. The dividend fund has a 50% U.S., 50% Canada mandate and held $7 billion in AUM as of Dec. 31. In March, the fund added holdings. Although most holdings pay dividends, the fund has flexibility and benefited from the sharp rise in non-dividend-paying Amazon.com Inc., up by 76%, and Ottawa-based Shopify Inc., up by 227%.(All individual stock returns are from Mar. 20 to Dec. 31.)

Juthani was surprised at how quickly markets recovered, particularly given other investor concerns, including the U.S. election and Brexit. He said he anticipates continued gains in equities but also volatility, given the uncertain timing of vaccine rollouts.

Fidelity Investments Canada. “Our managers tend to perform well in volatile markets where information is scarce — and they found lots of opportunities in March,” said Kelly Creelman, senior vice-president of products and marketing.

The Fidelity Global Innovators Class fund did particularly well, with a return of 95% for 2020. Strong holdings included Roku Inc., a California-based streaming service that was up by 336%, and Tesla Inc., up by 725%.

In the Canadian-focused small- and mid-cap equity space, the Fidelity Greater Canada Fund returned 55% in 2020. Its holdings included Brookfield Renewable Partners LP, up by 99%.

Another good pick by Manulife managers was Carvana Co., a U.S. online used car dealer, up by 716%.

RBC Global Asset Management. “In a year where massive divergences existed between winners and losers of the pandemic era, stock-picking was able to add significant value to our equity portfolios,” said Dan Chornous, chief investment officer. The RBC Global Equity Focus Fund and the RBC International Equity Fund had returns of around 25% and 20% in 2020, respectively, “driven mostly by security selection.”

Chornous noted that U.S. large-cap growth stocks outperformed as work-from-home measures benefited mega-cap technology stocks, pushing growth stocks to their highest relative levels since the technology bubble of the late 1990s. Since the November vaccine announcement, there’s been a shift toward smaller-cap, value and non-U.S. equities, Chornous said. But he warned that investors are “extremely optimistic and valuations are already stretched by some measures,” which could lead to a pullback.

Mawer Investment Management. Moroz said that in 2020, risk management “didn’t pay.” In other words, if you held risky stocks, you may have done really well.

Mawer prepared for two scenarios after Covid hit: a depression or enough fiscal and monetary stimulus to keep the economy from plunging. When the latter materialized, the firm’s holdings in “quality but boring stocks that make money” worked well, Moroz said.

Moroz pointed to two stock picks: Italy-based Recordati Industria Chimica e Farma SpA, up by 30%, and Softcat PLC in the U.K., up by 51%. Recordati is a specialized drugmaker, and Softcat provides hardware and software for small and medium-size businesses.

Mackenzie Investments. “It was an extraordinary and challenging year, which makes me all the more proud of our results and our ability to generate good returns without over-reliance on big-cap tech,” said Kristi Ashcroft, senior vice-president and head of product. She credited Mackenzie’s performance to the firm’s research process and focus on risk management.

Many of Mackenzie’s portfolio managers are bottom-up stock-pickers. One pick that did particularly well is U.S.-based Synopsys Inc., which supplies tools to the global semiconductor industry. Its price rose by 136%.

Ashcroft is a big proponent of the need to diversify risk in portfolios and to look for opportunities everywhere: in emerging markets, private credit and equity, and through thematic investments in areas such as energy transformation.

Dynamic Funds. This fund family ranked seventh in 2020, with 69.8% of AUM held in above-average funds.

Neal Kerr, president of Dynamic Funds, was surprised by how fast equities dropped — and how fast they rebounded. The experience underscored that trying to time financial markets is difficult and doesn’t work very often. “Most [retail] investors would have gotten out too late and wouldn’t have got back in quickly enough,” he said.

Kerr said 2021 could see more success from value stocks, which have “substantially lower” earnings multiples than growth stocks. But he also emphasized the importance of having portfolios diversified by investment style as well as geography.

Franklin Templeton Investments. This fund family’s performance was middling, with 51.1% of AUM held in above-average performing funds. But this was a marked improvement from 2014–19 results, during which Franklin Templeton averaged 33.5%.

The company’s success is partly due to introducing funds with different strategies. Duane Green, president and CEO of Franklin Templeton Investments Corp., said the acquisition of U.S.-based Legg Mason by the firm’s U.S.-based parent, Franklin Resources Inc., on Jul. 31, 2020, will accelerate Franklin’s improvement.

Green said the Franklin Global Growth Fund had a return of 35%, fuelled by strong stock selections, including Zscaler Inc., a U.S.-based cloud network security company (up by 272%); MercadoLibre Inc., an Argentina-based online marketplace (up by 270%); and Shopify.

Green said 2021 should be another positive year for North American equities. He said value stocks might do a little better, but doesn’t expect a massive switch.

IG Wealth Management. The company’s strategy is to migrate clients to low-fee fund series, which have unbundled pricing. An IG spokesperson said the analysis used for this article, which looks at the overall AUM held by a fund only, underestimates the IG fund family’s performance. 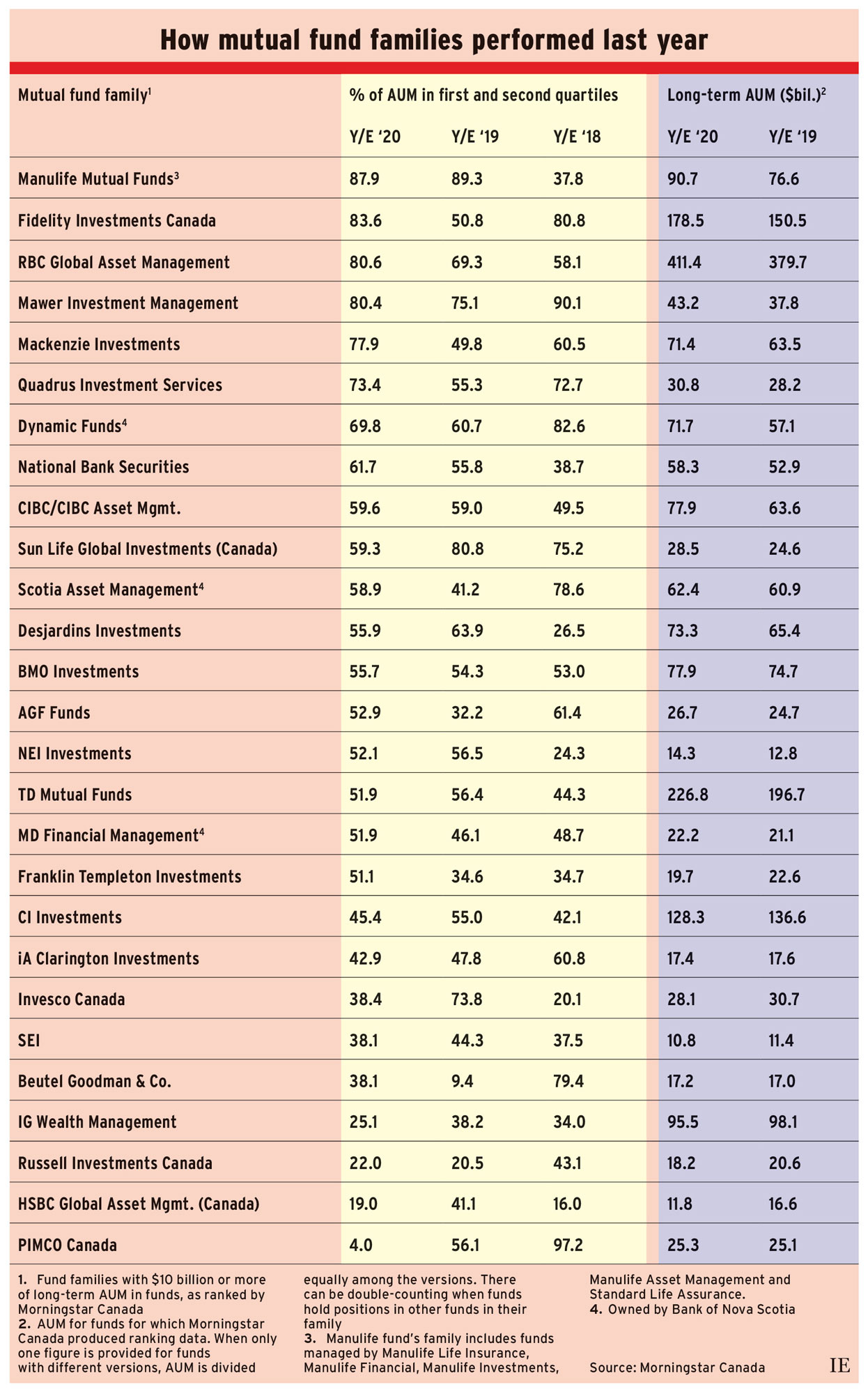 Hazards to watch for this decade

Tensions high ahead of U.S. election

Anti-flipping proposal may get bogged down with exemptions

Nonetheless, the budget proposal would provide clarity to the Canada Revenue Agency

Low-carbon investing is not a simple decision

Responsible investing can mean avoiding fossil fuels, or it can mean investing in and engaging with energy companies

A new era of clarity in Ontario

With minimum standards in place for use of “financial planner” in Ontario, it’s time for other provinces to act