This article appears in the February 2022 issue of Investment Executive. Subscribe to the print edition, read the digital edition or read the articles online.

Equities investors did unexpectedly well in 2021, thanks to stronger than anticipated economic growth. But inflation reared its ugly head as supply-chain problems and strong demand for goods sent prices climbing. That, in turn, raised expectations for higher interest rates this year.

Together, these factors resulted in a much different list of top-performing Canadian mutual fund families than recently, when stock-pickers such as Calgary-based Mawer Investment Management Ltd., Fidelity Investments Canada ULC, Dynamic Funds and Manulife Investment Management (Canada) dominated. (All firms are based in Toronto unless otherwise indicated.)

In 2021, three relatively small fund families headed the list: EdgePoint Wealth Management Inc., PIMCO Canada Corp. and Edmonton-based ATB Investment Management Inc. All three had at least 90% of their long-term assets under management (AUM) held in funds ranked in the first or second quartile for the year ended Dec. 31, 2021, according to Morningstar Canada. Interestingly, strong fixed-income performance pushed PIMCO and ATB to near the top of the list.

Among large fund families, the top performer was Dimensional Fund Advisors Canada Inc. with 76.9%, followed by CI Investments Inc. (74.7%) and National Bank Investments Inc. (72.0%). Other fund families with 60% or more of AUM held in above-average funds in 2021 were those from Vancouver-based HSBC Global Asset Management (Canada) Ltd., TD Mutual Funds and Manulife.

Here’s a look at some of the best-performing fund families and a few that lagged:

Morningstar rates four of the family’s funds. These are categorized as Canadian large-cap, Canadian aggressive allocation, global aggressive allocation and global mid/small-cap. The firm declined to be interviewed until their 10-year returns are in the top quartile. The fund family had no AUM in above-average performing funds in 2020 and only 14.7% in 2019.

This fund family is dominated by the PIMCO Monthly Income Fund, which held $22.4 billion (87.9%) of the family’s $25.5 billion in AUM as of Dec. 31. The various versions of the fund achieved positive returns in a year when the average return for Canadian global fixed income funds was –1.6%. Alfred Murata, managing director and portfolio manager, said PIMCO benefited from focusing on shorter-term durations.

This fund family also benefited from good fixed-income performance, said president Brett Kimak. The strategy was “shorter duration with higher-yielding credit positions relative to the benchmark [the FTSE Universe Bond Index].” He explained that the index is about 75% low-yielding government positions, “whereas we were closer to 10% government/90% [corporate] credit within our portfolio.”

The fund family’s performance rose significantly in 2021, with 74.7% of AUM held in above-average performing funds compared with an average of 45.6% in the previous seven years.

“We used to run as boutiques and silos, where our scale was limited to the individual boutique. We now have one integrated investment management team,” Lewis said. “We believe this fundamentally different approach enables better collaboration and information sharing, and has directly led to better investment outcomes.”

Terry Dimock, head portfolio manager, said that including ESG analysis was beneficial last year. “We believe strongly that this helps fund managers to increase risk-adjusted returns.” For example, in December, one manager sold a position in Netherlands-based Koninklijke Vopak NV “after abrupt departures in top management,” Dimock said. “Without a proper succession plan, it was believed that governance was significantly impaired and that the execution of the strategic plan of the company was at risk.”

The fund family uses third-party portfolio managers for 90% of its funds. “We believe in picking from the best in the world,” Dimock said. “We look for strong organizations, teams with the right amount of experience, efficiency and good ESG analysis.” Portfolio managers are reviewed monthly.

This is another company that did well in fixed income. One of Franklin’s three big funds with above-average performance was the Franklin Bisset Core Plus Bond Fund, with $2.1 billion in AUM as of Dec. 31. The other two were the Franklin Bisset Canadian Equity Fund ($2.8 billion) and the Franklin Quotential Balanced Growth Portfolio ($2.4 billion).

ARC merged with Seven Generations Energy Ltd. in 2021, raised its dividend twice and executed a normal course issue bid for 10% of its shares. Freehold also raised its dividend several times, Stelmach said, and saw increased activity on its lands, thanks to higher oil and gas prices.

Despite strong gains in 2021, Stelmach said, energy equities, “which still trade at historically low multiples despite strong profitability and enhanced ability to pay dividends and buy back shares, remain attractive to us.”

This was a relatively down year for Mawer, which averaged 86.6% of AUM held in above-average performing funds in the previous seven years. But 43.4% of AUM held in above-average funds in 2021 is still ahead of other stock-picking firms. CIO Paul Moroz said the firm’s international funds are generally light on banks and energy, but the family benefited from the bank stocks in its Canadian equity fund. Holdings of big U.S. tech also did well.

Some of Mawer’s equities holdings that did well include U.K.-based Bunzl PLC, a distribution company (up by 16%) and Georgia-based Intercontinental Exchange Inc., a financial and commodities exchange operator (up by 18%).

Some picks did well. These include California-based Williams-Sonoma Inc. (up by 66.1%), Texas-based home construction company DR Horton Inc. (up by 57.4%), and California-based Nvidia Corp. (up by 125.3%). Creelman noted that Nvidia, which makes computer chips, benefited from a shortage.

Creelman said investors may return to quality stocks this year, adding that a lot of valuations have been compressed, creating “great buying opportunities.” 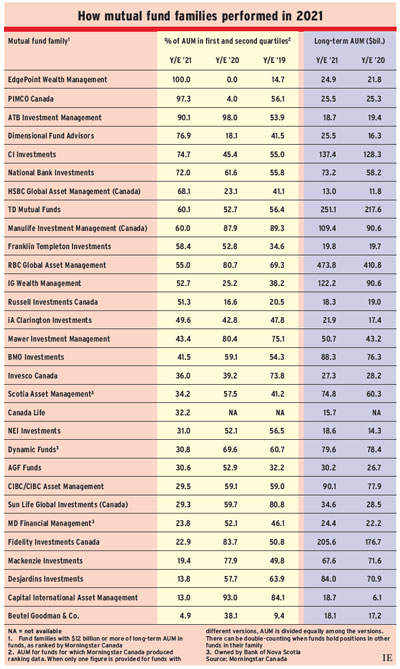 Building funds for all seasons

Weak conditions to weigh on assets, revenues and earnings in 2023, Moody's says

Bridging hearing slated for second half of 2023