This article appears in the Mid-October 2022 issue of Investment Executive. Subscribe to the print edition, read the digital edition or read the articles online.

Normally, fixed-income securities with longer maturities pay higher yields than those with shorter maturities. But these are not normal times. Multiple sharp interest rate hikes by the Bank of Canada have made short-duration products more rewarding.

This ETF, actively managed in Calgary by a team with Franklin Bissett Investment Management, starts out positioned defensively with a duration of just over half a year and an emphasis on high-quality credit. Even so, it’s yielding more than 4% as of late September — almost a full percentage point more than 10-year Government of Canada bonds.

Farooq said the ETF’s launch was a response to interest from financial advisors about low-risk investments that can generate higher yields than bank deposits without having to commit to a fixed term.

“Is there a way for me to enhance my cash position but not to lock into those GIC-type products?” said Farooq. “That’s the sort of question we’ve been receiving from advisors across Canada.”

The ETF’s management fee is 0.15%, low for a fully active strategy, and the weighted average credit quality is single-A. Holdings include commercial paper, bankers’ acceptance notes, bonds that are nearing maturity, Treasury bills and other cash equivalents. Even if rates continue to rise, causing bond prices to fall, the short-term securities that the ETF holds can be rolled over at higher rates.

Farooq said another potential source of returns is what he described as “oversold” bonds that previously traded at premiums but now at discounts. These bonds will mature at par value, resulting in some capital appreciation.

Unlike money market funds, Franklin’s ultra-short ETF can hold debt instruments with maturities longer than a year. In fact, when bond market conditions become more favourable, the managers will have the flexibility to extend duration as far out as two years.

“In this market environment, we will probably be in the less-than-one-year bucket for quite some time,” Farooq said. “If rates start going down, then obviously we have a lot more leeway to do other things in the portfolio.”

The risk of doing so is that the ETF could experience short-term capital losses. “Our product won’t have a stable [net asset value],” Farooq said. “It will fluctuate because we have individual bond instruments inside and an active strategy.”

Among ETFs, the closest rival to Franklin’s new offering is the $763-million BMO Ultra Short-Term Bond ETF, which also has a management fee of 0.15% and is actively managed by BMO Global Asset Management Inc.

The BMO ETF’s holdings have terms to maturity of less than a year or reset dates within one year. In late September, its yield to maturity was 3.97% and its duration was 0.45 years, both slightly lower than Franklin Bissett’s ETF.

The most popular short-term ETFs are those that hold bank deposits acquired at institutional rates, led by the $3.4-billion CI High Interest Savings ETF and the $2.6-billion Purpose High Interest Savings ETF. After deducting management fees of 0.15% or less, they pay interest income that’s currently in the 3.50%–3.75% range while avoiding capital losses. For competitive reasons, several major bank-owned brokerages don’t make them available to clients.

September also saw the launch of the Purpose Cash Management Fund, which holds roughly 60% in bankers’ acceptance notes and 40% in commercial paper, the majority maturing within 30 days. As of Sept. 14, the net yield was expected to be 3.30%.

The TD Canadian Money Market Fund’s Investor series, for example, was yielding 2.64% in late September, with prospects of heading higher. By comparison, the fund’s full-year return in 2021 was just 0.06%.

“The fund is positioned to take advantage of further interest rate increases,” said portfolio manager Elaine Lindhorst, vice-president and director with TD Asset Management Inc. (TDAM). By holding shorter maturities, “that just means we’re able to be back in the market purchasing at a higher yield at a quicker pace.”

TDAM has added incremental yield by holding a portion of its money market funds in corporate credits, such as high-quality paper issued by major banks, as well as some exposure to floating-rate notes. Over time, said Lindhorst, active management of the fund has produced above-benchmark returns, “and the primary driver of that is our credit overlay.” 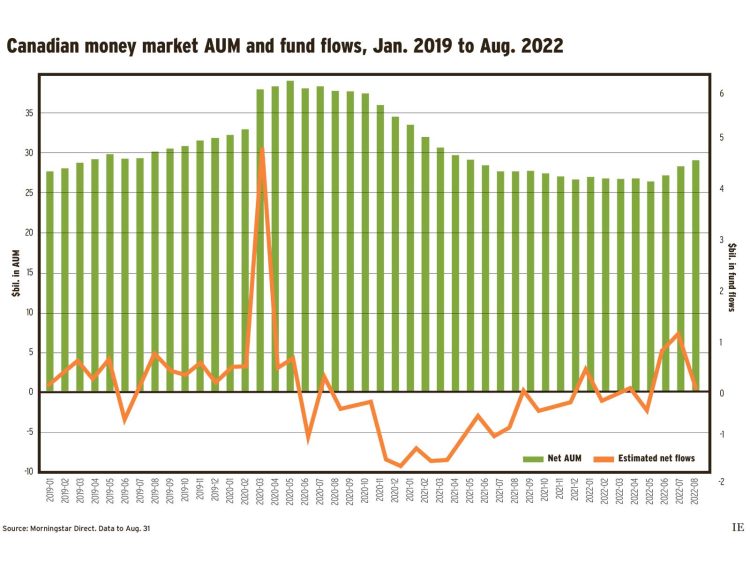 ETFs buck the downtrend of 2022

Latest news In Focus on Products

ETFs buck the downtrend of 2022

Important numbers from the year in ETFs

Big spending packages or tax cuts are probably off the table for the next two years, providing greater certainty

PMs prescribe a healthy dose of alts for investing inheritances