The dealer business is booming, with financial advisors working within this channel reporting strong growth in assets and increased productivity. But, even in this heady climate, there are signs that financial advisors are preparing for choppier waters ahead.

According to the 2019 Dealers’ Report Card, advisors at Canada’s fund dealers generated impressive growth in assets and boosted their productivity. For the average advisor in our survey, assets under management (AUM) were up by more than 25% compared with last year. Average AUM came in at $48.6 million this year, up from $38.4 million in 2018.

While some of this growth was due to advisors increasing their client bases, much of it was likely attributable to robust market returns. Advisors added client households over the past year, with average client household numbers rising to 208.2 from 197.7 in last year’s survey. But this increase in rosters was well below the growth rate for advisors’ assets.

Along with this increased number of client households, average assets were likely boosted by a combination of market gains and advisors consolidating their clients’ assets from other institutions.

Average advisor productivity (measured as AUM/client household) also ramped up, jumping from just under $240,000 in last year’s survey to more than $320,000 this year.

This dramatic increase in average advisor productivity is somewhat overstated due to a significant outlier in the data: an advisor with AUM/client household of almost $16 million, which was more than double the next-most productive advisor in the survey.

Even excluding this outlier, the increase in average AUM/client household is still impressive – rising by about 20% from last year to almost $290,000. 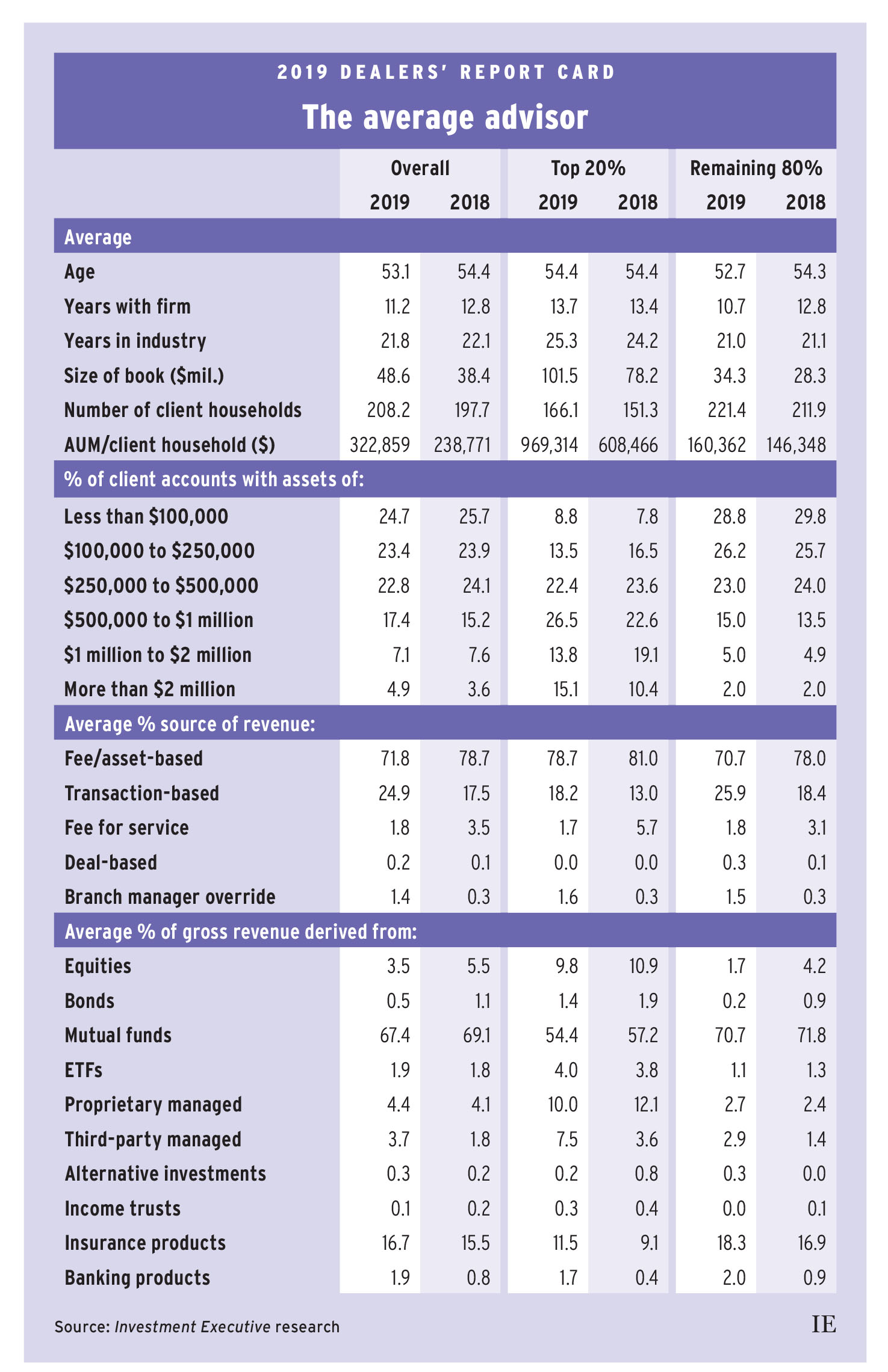 The increase in average productivity also was reflected in the account distribution data, which points to advisors increasing the portion of their books devoted to higher net-worth client households. For the overall advisor population, for example, the share of accounts worth less than $500,000 dropped to 70.9% this year from 73.7% in last year’s survey. Conversely, the share for larger accounts increased, including accounts worth more than $2 million: those constituted 4.9% of the average book, up from 3.6% last year.

For top performers, the share of accounts worth less than $500,000 dropped from 47.9% last year to 44.7% in 2019. For these advisors, the increase in higher-value accounts was particularly evident at the top end of the account distribution, with the share for accounts worth at least $2 million jumping to 15.1% from 10.4% in 2018.

The lower 80% of advisors also reported that their share of sub-$500,000 accounts was declining, albeit from a much higher level, dipping to 78.0% from 79.5%. The largest accounts weren’t driving the shift in share for these advisors; rather, the accounts in the $500,000 to $1-million range were responsible for the gain in share of accounts above the $500,000 mark.

Alongside the shifts in account distribution trends, the asset mix for advisors also appeared to fluctuate. Overall, advisors reported making more use of banking and insurance products, while the share of their books in traditional securities (stocks, bonds and mutual funds) declined somewhat.

Mutual funds remained the dominant product category for advisors in the Report Card, but their share was 67.4% this year, down from 69.1% last year. Yet advisors didn’t turn to ETFs, which remained below 2%. Instead, advisors’ reported use of insurance products was 16.7% of the average book this year, up from 15.5% in last year’s survey. (See Need for insurance support growing.) Similarly, their use of banking products more than doubled to 1.9%, from 0.8% in 2018.

These basic trends are evident among both sets of advisors, who reported declines in their basic holdings of securities, increases in their use of banking and insurance products and a two-fold increase in the share of third-party managed products.

The rest of the industry had a much lower allocation to proprietary products, at just 2.7%. But unlike the trend for the industry’s top performers, this actually represents a modest increase, up from 2.4% in 2018.

The increased use of banking and insurance products indicates that advisors may be looking to further diversify their revenue. At the same time, the increase could reflect a desire to take risk off the table for clients, with equity markets at historically high levels and market volatility on the rise in recent years. Both explanations point to growing caution about the market’s prospects after a year of strong growth.

Whatever the motivation for the changes in asset mix, this year’s survey also reveals a notable shift in revenue sources for advisors, which may also be tied to trends in particular products. While fee- and/or asset-based compensation remained dominant revenue sources, the reported share of each was down to 71.8% this year, from 78.7% last year. Conversely, advisors’ reported reliance on transaction-based compensation was up notably, jumping to 24.9% from 17.5% in our 2018 survey.

Overall, the trends in this year’s survey were largely shared by the dealers’ top producers and the rest of the industry – a case of a rising tide lifting all boats.

Back to balance for dealer advisors

A question of connection

The weight of proprietary product

Praise and critique for fee-based support

No time to waste on climate risk, BoC and OSFI warn

A 2019 distribution agreement remains in place, with Fiera as Natixis' preferred Canadian distributor