Unprecedented upheaval has reshaped the economic landscape in ways that may prove permanent. Through it all, however, the advisory business has continued to grow.

Aggregated data from our full 2021 Report Card series — encompassing the brokerage sector, the fund dealer segment, retail branch-based bank advisors and insurance advisors — show the investment business has been able to generate robust asset growth, and that advisors themselves have prospered. This growth occurred amid an ongoing pandemic, a relentless push for innovation in the sector and a fundamental regulatory shake-up.

Despite these disruptive forces, the average advisor’s assets under management (AUM) for this year’s total Report Card series sat at $137.3 million. That’s up more than 25% from the $109.5 million average recorded back in 2019, the last time Investment Executive completed all four surveys that cover each of the major industry sectors.

Over the same two-year period, average client household numbers have edged lower. In 2019, the average Report Card advisor dealt with 278.8 households. This year, that’s down to 237.8. This drop in the average number of households being served, when combined with the surge in assets, implies that average productivity rose over the past couple of years as well.

Different segments of the industry drove these trends.

For example, while the brokerage sector continued to boast the highest average AUM of the four parts of the business we survey ($209.7 million in the 2021 research), it didn’t drive the growth in average assets. In fact, the brokerage sector’s growth rate over the past two years was below the industry average.

Industry segments that began with smaller average asset bases grew faster. Notably, the fund dealer segment outpaced the brokerage space in average asset growth over the past two years. Back in 2019, fund dealer advisors reported average AUM of $48.6 million. This year, that figure jumped more than 33% to $66.3 million.

The insurance segment grew even more rapidly, with average AUM surging from $41.9 million in 2019 to $68.4 million this year. However, this outsized growth should be taken with a grain of salt, as it reflects only the relatively small segment of advisors who operate significant investment books alongside their core insurance business. That caveat aside, the growth in assets over the past couple of years has generally been stronger among industry segments with smaller initial books.

While asset growth was somewhat slower for the brokerage space, it was non-existent for the retail-bank branch advisors and planners in our survey (which had the second-largest average AUM for 2021). Average AUM in that segment was essentially unchanged from 2019 to 2021, at $121.1 million.

Where the retail-bank respondents led the way was in culling their client households. In 2019, the average bank advisor in our research served 262.9 households. This year, that number was down to 242.9.

At the same time, client households were unchanged in the brokerage space (at an average of 193 both years), and barely changed among the fund dealer advisors (down to 205.6 this year from 208.2 in 2019). The insurance advisors in our survey joined the banks in trimming their client households, to 498.6 this year from an industry high of 522.4 in 2019. While the insurance advisors’ household numbers fell, the pace of change was notably slower than it was at the banks.

The data also indicated personnel turnover during the past couple of years — likely through a combination of older advisors retiring and younger ones entering the business.

This slight increase was matched by similarly modest increases in respondents’ time in the industry and their reported tenure with their current firms. Back in 2019, the average advisor in our surveys had been in the business for more than 20 years and with the same firm for almost 12. In this year’s surveys, those numbers increased moderately, to 21.8 years in the industry and 12.7 years at the same firm — also less than the expected two years.

Alongside the industry’s shifting demographics, the data also indicated that the rise in average AUM over the past couple of years is flowing through to advisors themselves, generating increased compensation.

In each of the other three sectors of the industry, the share of advisors at the very top end of the pay scale either declined over the past couple of years (among fund dealer advisors and insurance advisors), or remained non-existent (advisors and planners from retail banks).

Despite differences among the four segments’ measures, advisors have made gains over the past two years — even amid the turmoil and disruption facing the economy and financial industry. 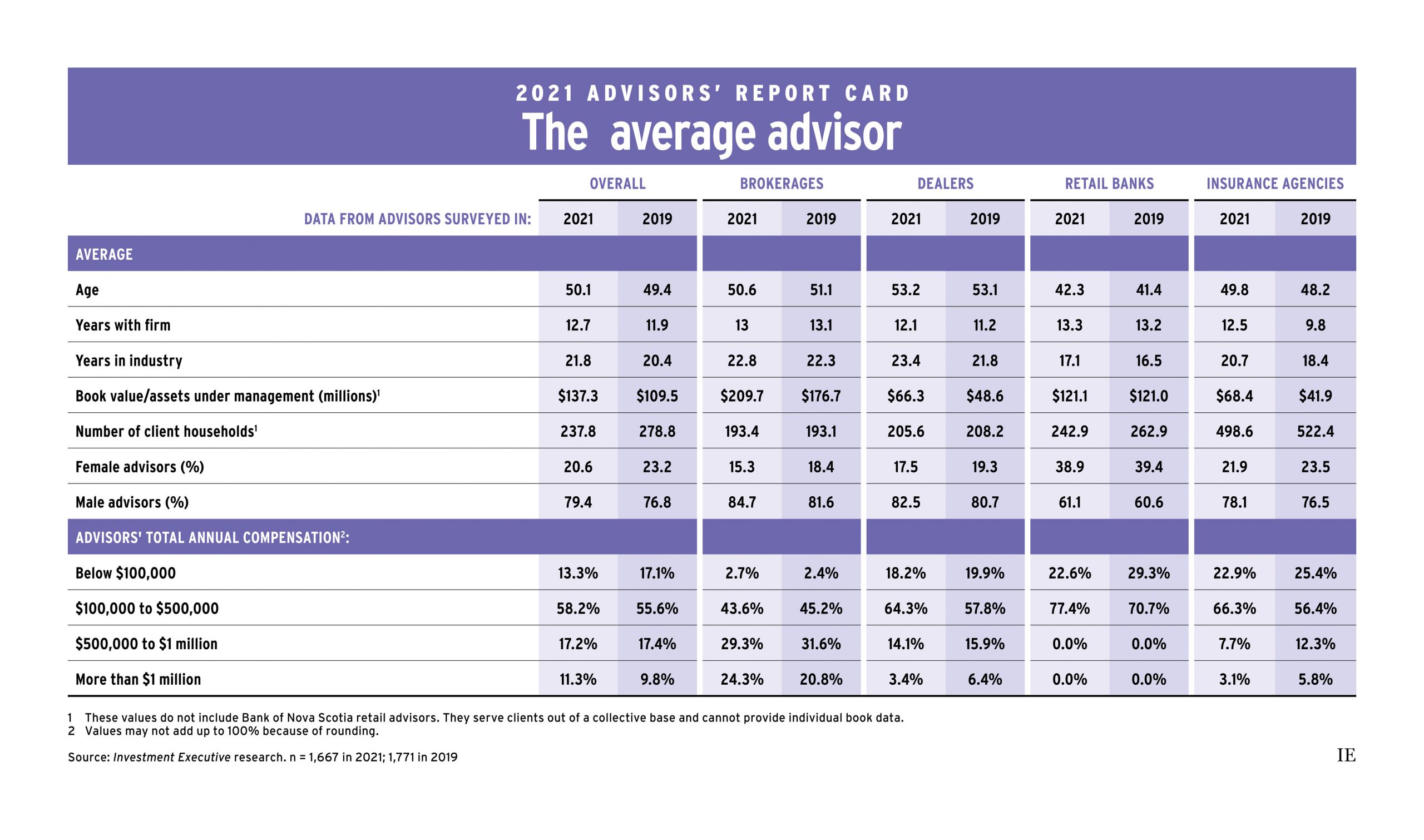 The debate about the benefits of responsible investing persists

Mutual fund usage among dealer advisors remains high, but fell between 2021 and 2022

The loonie's performance is highly contingent on external developments

Despite recent slide, housing prices still up from pre-pandemic