This article appears in the September 2022 issue of Investment Executive. Subscribe to the print edition,read the digital edition or read the articles online.

Before the pandemic, client margin debt was on a steady downward trajectory, contracting to $23.3 billion at the end of Q1 2020 from $26.2 billion at the start of that year. Since then, however, investor borrowing has soared — peaking just short of $40 billion in Q3 2021.

This year, client margin debt has retreated as markets weaken and economic uncertainty grows. Jack Rando, managing director with the Investment Industry Association of Canada (IIAC), said forthcoming data will show that outstanding margin debt was down to $37.2 billion at the end of Q2, from $38.4 billion in the previous quarter.

However, client leverage remains well above pre-pandemic levels at a time when interest rates are rising rapidly. National Bank Financial Inc. estimated that rising rates will add $30.4 billion to household borrowing costs over the next two years, with about $14.0 billion coming from costlier lines of credit and the rest stemming from higher mortgage expenses.

Higher borrowing costs are only part of the risk. Asset price volatility coupled with leverage also raises the risk of severe market turmoil. Falling asset values that trigger margin calls can create a “margin spiral” — a negative feedback loop when investors are forced to sell into a declining market, driving values down further.

In an extreme scenario, the broader financial system is destabilized, putting bank and investment-dealer balance sheets under pressure as those firms seek to absorb the selling activity. Markets faced this kind of turmoil when the Covid-19 pandemic first hit, sparking widespread selling. That prompted policymakers to take unprecedented actions to shore up market liquidity by slashing interest rates, buying assets and relaxing capital requirements.

Since then, the collapse of New York-based hedge fund Archegos Capital Management LP exposed yet another risk:the threat of undetected buildups of leverage. In March 2021, Archegos crumpled after the firm was unable to meet margin calls on its highly leveraged, highly concentrated trading positions. Banks incurred billions of dollars in losses as the firm went under.

“The collapse of Archegos has shown how risks related to leverage, concentration and interconnectedness can crystallize,” noted a post-mortem on the firm’s fall by the European Securities and Markets Authority published in mid-May. “Beyond headline losses faced by some banks, this event indicates that further work is needed to adequately monitor risks related to derivatives and leverage.”

The Bank of Canada’s latest Financial System Review stated that “left unchecked, positions built up through ‘hidden leverage’ may become large enough to harm financial stability, especially if they are paired with lenders’ concentrated credit exposure to highly leveraged firms.”

Given the concern, the central bank is participating in efforts by the Financial Stability Board (FSB) to better understand sources of hidden leverage globally. The FSB is expected to report its findings to the G20 in October.

In the meantime, the recent growth of client margin debt in the Canadian investment business is no secret. The sharp rise in margin debt from its level in the first quarter of 2020 to its peak in late 2021 (a 69.4% jump) came amid friendly borrowing conditions for investors and a boom in retail investing.

The Investment Industry Regulatory Organization of Canada reported that account opening activity more than doubled in 2020, with around 2.3 million brokerage accounts opened during the year, up from fewer than 900,000 the previous year.

The sharp increase in retail investor activity led regulators to worry about the risks being taken by novice investors, many of whom are getting their investing information from social media and other dubious sources.

In the wake of the surge in retail trading, the Ombudsman for Banking Services and Investments (OBSI) reported a sharp rise in complaints involving DIY investing firms in 2021. In particular, OBSI found investors complaining about margin-related issues alongside service glitches and order execution problems.

OBSI also reported that service issues — such as an investor being unable to access their account amid heav y trading volume and heightened market volatility — can be exacerbated when that investor also is facing margin calls that threaten to decimate their port fol io. Yet investors who accept these risks when signing up for a DIY account may have little recourse when their securities are liquidated to meet margin calls. 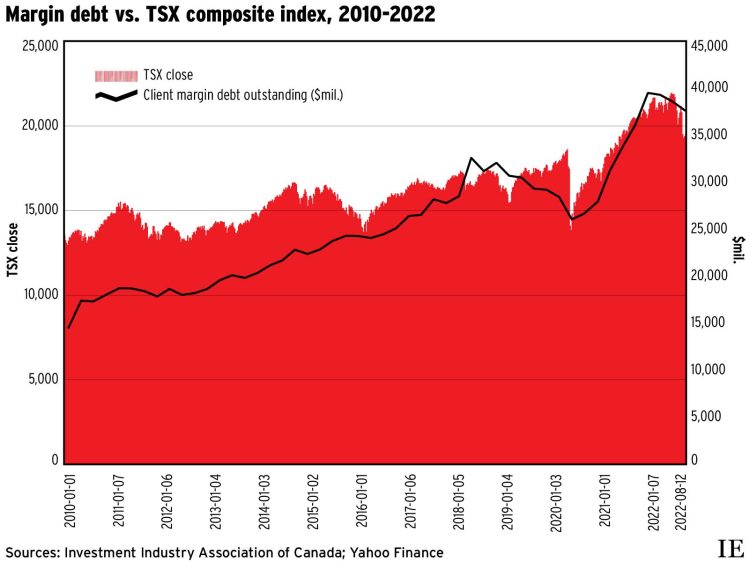 Credit unions up their game in wealth management

The state of play of advisory, investment services from co-operatives, credit unions

The government set aside $2.8 billion over three years to cover inflation-fighting programs and payouts

Compared to the same period in the previous fiscal year, government revenues were up 18.6%

Foreign exchange can throw off your tax-loss selling plans

A client example illustrates the importance of currency calculations