Many Canadian financial services companies were in good shape as 2020 began, which will help them survive the effects of the Covid-19 pandemic. The Big Six banks are in the best shape, given their large amounts of capital and diverse businesses. Large life insurers are more vulnerable because of their exposure to financial markets.

Investment Executive’s financial services profit survey covers the quarters ended between Nov. 30, 2019 and Jan. 31, 2020. Of the 40 companies surveyed, 22 reported higher net income than in the corresponding period a year earlier, five reported positive earnings vs a loss a year earlier and HSBC Bank Canada’s profit was unchanged. That left eight with lower net income and four in a loss position. The average gain was 13.7%. (These figures exclude Great-West Lifeco Inc. [GWL] and IGM Financial Inc., the results for which are consolidated with those of Power Financial Corp.)

The majority of the gains were among the banks and life insurers. There were nine banks and three lifecos that reported higher earnings, and E-L Financial Corp. Ltd. reported positive net income vs a loss in the corresponding quarter the previous year. It was the lifecos that had the biggest dollar increases in net income. If that sector is excluded, net income for the remaining 38 companies was up an average 6.3%.

Of the other nine firms reporting increases in net income, three were finance companies and three were mutual fund and investment companies. The others were mortgage insurer Genworth MI Canada Inc., Intact Financial Corp. (a property and casualty [P&C] insurer) and U.S.-based brokerage Oppenheimer Holdings Inc.

In addition, BAM is splitting its common shares as of April 1: shareholders will receive one share for every two already held. This effectively increases the dividend payout for previously held shares to 27¢. 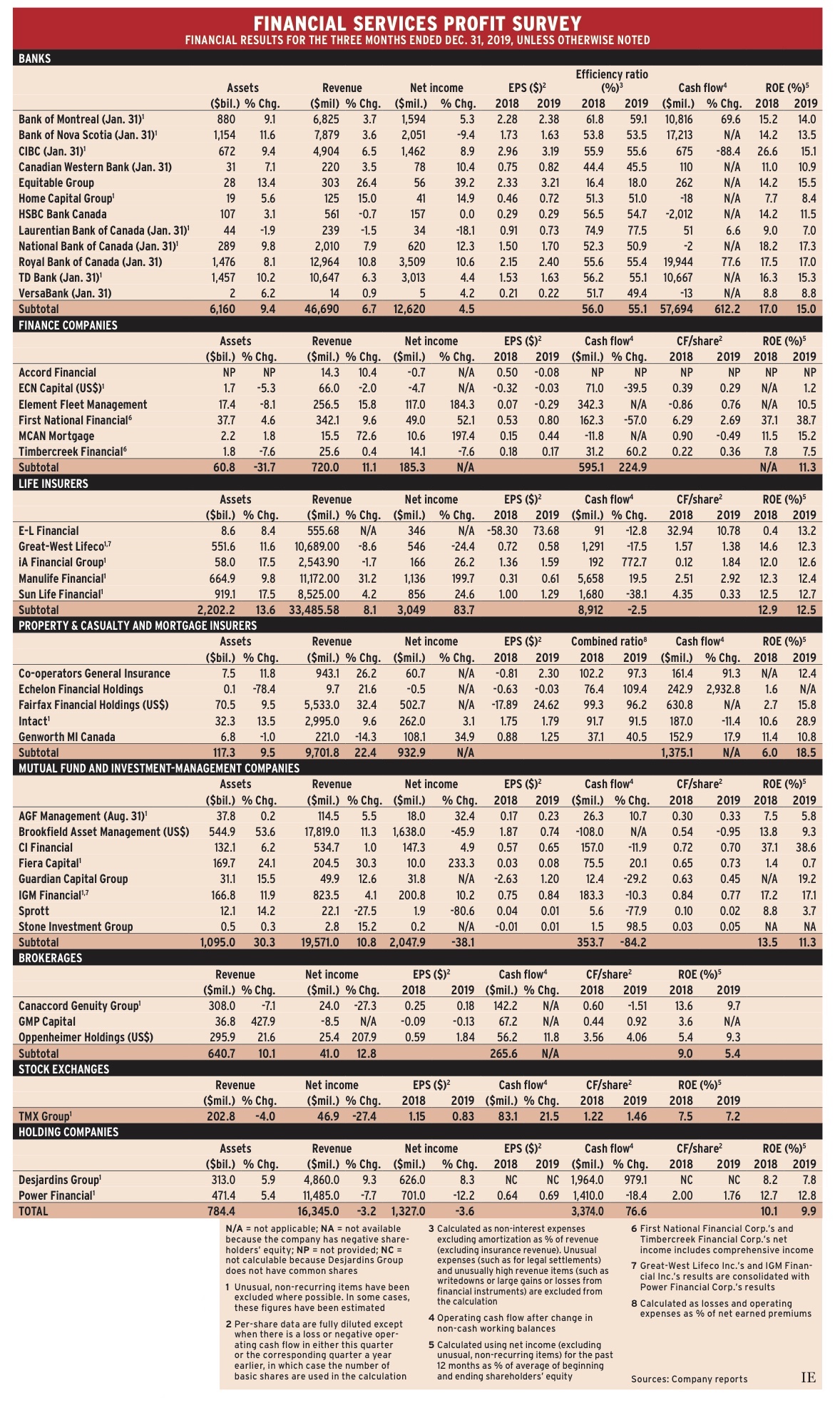 Here’s a look at the sectors:

Scotiabank reported a 3.6% increase in net income, but this included a $316-million gain on the sale of operations in Puerto Rico, the U.S. Virgin Islands and El Salvador, plus reduction in the bank’s investment in Thailand. These are one-time, non-recurring items that are excluded in this survey. Without this gain and some integration costs, net income dropped by 9.4% as profits slipped in both Canadian and international banking.

François Desjardins, Laurentian’s president and CEO, stated in his firm’s financial report: “We are disappointed with this quarter’s financial results [a drop in net income of 18.1%] and are addressing both the revenue and expense sides of this equation.”

Loan-loss provisions for the 12 deposit-taking institutions were a combined $3 billion vs $2.9 billion in the previous quarter and $2.7 billion a year earlier. Credit-rating agency DBRS Morningstar Inc. stated in a recent report on the large Canadian banks that credit quality “remains sound.”

After the quarter ended, Canadian Western Bank announced on March 2 that it will acquire T.E. Wealth and Leon Frazer & Associates from iA Financial. On March 16, DBRS raised the credit rating of Home Capital Group Inc. to BB (high) from BBB (low).

Four of the five lifecos had improved earnings, with only GWL reporting a decline, the result of a downward revaluation of a deferred tax asset. Without that, net income would have been up by 3.2%.

E-L Financial has two businesses: life and health insurance through Empire Life Insurance Co.; and corporate investments. The firm’s investments’ revenue and earnings swing as the fair value of securities changes. In this quarter, there was a gain of $271 million in the fair value vs a loss of $324 million a year earlier.

The quarter was good for this sector year-over-year, with Intact and Genworth MI reporting earnings gains; Co-operators and Fairfax reporting a return to positive net income from a loss; and Echelon Financial Holdings Inc. reporting a smaller loss.

Fairfax is the biggest company in the sector and, like E-L, its earnings jump around because of a focus on investments. Fairfax utilizes sophisticated investment techniques, including derivatives. The firm reported a gain in fair value of investments of US$604.4 million in the quarter vs a loss of US$664.3 million a year earlier.

Mutual fund and investment-management cos.

Six of the eight companies reported improved earnings (including two reporting a gain vs a loss year-over-year). But BAM, by far the largest firm, reported a 45.9% drop, pulling the sector’s earnings down by 38.1%. BAM’s decline was partly due to smaller increases in fair market values only US$4 million vs US$257 million year-over-year but also reflected higher interest expenses, depreciation and amortization.

GMP Capital Inc. sold its capital markets business on Dec. 6, 2019, and will focus on wealth management through Richardson Financial Group Ltd., which GMP is in the process of acquiring.

A good recovery for financial services

Regulators are slowly bringing the sector to heel

Some experts believe the feds could hike capital gains rate

Investors watching for clues next week about monetary path

Weaker GDP data and higher inflation have muddled the picture

RRSP rollover into an RDSP can provide tax savings

New finance is ‘a platform of growth,’ portfolio manager says

Areas such as digital payments, and cryptocurrency and blockchain are increasingly making a mark