This article appears in the November 2020 issue of Investment Executive. Subscribe to the print edition, read the digital edition or read the articles online.

Kurt Macalpine, CEO of Toronto-based CI Financial Corp., says he has no plans to change Aligned Capital Partners Inc.’s independent financial advisor model after securing a majority stake in the Burlington, Ont.-based brokerage. The acquisition does, however, provide CI with a new channel through which to distribute in-house products.

“[Aligned was] running a great business prior to CI partnering with them,” MacAlpine says, pointing to the quality of Aligned’s management team, its support for advisors and its growth rate. Revenue at Aligned grew by 1,237% between 2013 and 2018.

MacAlpine believes opportunities will emerge to capture “meaningful” cost and revenue synergies, including the sale of proprietary products through the Aligned channel. “When I look on the product side, there are lots of things that we can do together,” he says. “We have all the building blocks.”

CI closed the deal for a 70% stake in Aligned, first announced in August, on Oct. 19. (Aligned’s senior management team retains 30%.) Aligned’s 200-plus advi­sors administer $10 billion in assets on an Investment Industry Regulatory Organization of Canada (IIROC) platform, a business line MacAlpine indicates he wants to grow.

Under CI’s ownership, advi­sors at Aligned still will be free to select products that best fit their clients’ needs despite the fact that CI is looking to boost distribution as a result of the deal, says Michael Greer, founding partner and executive vice-president with Aligned.

“There’s no secret that CI would like to get a bigger share of our client wallet,” he says. “But ultimately — and Kurt has been very clear in this mandate; he said it directly to our advisory council, who shared it with our advisor base — CI still has to earn the right to get that product choice into a client portfolio.”

MacAlpine confirms Aligned advisors will not be required to sell proprietary products — “we have no [business] model like that [at CI] today,” he says — but adds he has “a high degree of confidence” that Aligned advi­sors will be drawn to CI’s product lineup. “We are going to do things for [Aligned’s advisors] that deliver better value than what they can get elsewhere, and they will gravitate toward us if it’s a fit [for the client].”

Scott Chan, director of research for financials with Canaccord Genuity Group Inc. in Toronto, says that winning over Aligned advisors to CI products may take time: “You have to earn the trust of the advisors; you can’t change the investment selection at the start.”

CI managed a combined $27.9 billion for clients of advisors with Assante Wealth Management and CIPC as of June 30 — more than half of the roughly $51 billion in client AUA that advisors under the two platforms collectively administer.

“Behind the scenes, over the last five-plus years, CI has done a good job converting that Assante AUA into [assets under management],” Chan says.

Aligned’s senior management team is staying on and intends to run Aligned on a “business as usual” basis, Greer says. The firm will continue to operate on a flat-fee advisor compensation model — rather than on a commission-based grid, as Assante does — and Aligned’s advisors will be free to run their businesses as they see fit.

“In general, advisors don’t love change,” Thompson says. “[They] can be very sensitive to anything that can be viewed as disruptive or inconsistent with the client families they serve. It’s really important to have [advisors] in the tent, and [retaining] leadership is often part of that.”

MacAlpine says that CI plans to keep Assante’s 900 advisors on a grid. About half of Assante advisors are IIROC-registered and the other half are registered with the Mutual Fund Dealers Association of Canada.

“It’s a slightly different value proposition [between Aligned and Assante], based upon what advisors are looking for to run their practice,” says MacAlpine, who describes the two platforms as complementary. “It’s not like we have two of the same thing.”

MacAlpine says he would have no problem with advisors wanting to move between Assante and Aligned, but he doesn’t anticipate CI’s ownership of Aligned will spark many such switches. “Both [platforms] are compelling value propositions for advisors for different reasons,” he says.

As part of a company-wide rebranding, Assante will become CI Assante Wealth Management and Stonegate Private Counsel will become CI Private Wealth, with the changes scheduled for November. CI didn’t say whether it plans to change branding at Aligned.

Christopher Enright, founding partner and president of Aligned, says advisor recruitment by his firm, which has occurred at a “consistent” pace of three advisors per month since 2012, “has accelerated dramatically” since the CI deal was announced. Between mid-October and the end of November, Aligned expects to onboard 23 advisors, Enright says.

The financial backing of CI, as well as CI’s brand, is reassuring to advisors who may have been hesitant to join “a smaller independent with a different model,” Enright says.

Says Greer: “It also takes away the uncertainty of being a smaller firm with the expectation that at some point you’re likely to be sold. The question was always ‘Who are you going to sell to?’ — whether [to] a bank or other [firm].” With the CI deal, that uncertainty has been removed, he says.

MacAlpine approached Aligned in March about a partnership, Enright says, and serious negotiations began in June. Aligned had spurned previous suitors — “We had been approached probably every quarter by a lot of the usual suspects” — but the deal with CI seemed to be the right fit at the right time, he says.

“We had a good discussion in terms of what we were trying to do, which was to create a legitimate alternative to the larger financial institutions,” Enright says. “We really seemed to line up in terms of how we saw the world and how important advice is.”

MacAlpine says he remains interested in making further wealth management acquisitions, indicating he “would like to do as many deals as possible” for “high-quality firms with great growth rates and ambitious employees who want to deliver exceptional client experience and value.”

Over the past 12 months, CI has acquired interests in six U.S.-registered investment advisory (RIA) firms, as well as three RIAs acquired indirectly through transactions made by affiliated RIAs. Those deals represented $15 billion in AUA, giving CI $76 billion in total wealth management AUA.

The RIA and Aligned deals fit within the mandate MacAlpine set for CI last year: modernizing the asset management business, globalizing the company and expanding wealth management. “We’re really transforming our company, with wealth management at the forefront,” he says.

While MacAlpine says he’s equally interested in acquiring firms in Canada as he is in the U.S., “practically speaking, the concentration and maturity of the Canadian marketplace makes [that] more challenging to do.

“There’s really no other Aligned Capital in Canada,” MacAlpine says. 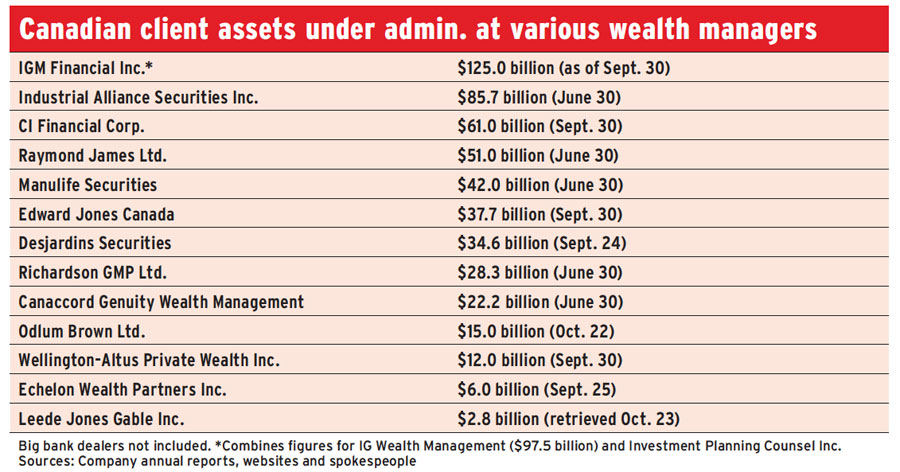 After the acquisition spree