Since the pandemic began, the “new normal” is characterized by economic uncertainty.

Normal business cycle dynamics don’t apply to the second half of 2020, stated New York–based BlackRock Inc. in its mid-year outlook report. The world’s largest asset manager now tracks “known unknowns,” such as how economies are faring while trying to control the spread of Covid-19, whether fiscal stimulus remains sufficient and whether permanent economic damage emerges.

Canada’s gross domestic product contracted at an annualized rate of 38.7% in the second quarter, the country’s worst quarterly performance on record, which followed a drop of 8.2% in Q1.

Economic recovery began in May and increased in June, but the Bank of Canada forecast a 7.8% contraction for the year in its July monetary policy report. In addition, the International Monetary Fund projected in June that global economic growth will contract by 4.9% this year.

Despite the negative economic outlook, equities climbed subsequent to March’s sell-off on the support of monetary and fiscal policy. At the end of July, the S&P 500 composite index had returns of roughly 3% year-to-date, and the S&P/TSX composite index’s returns were in the red by only about 3.5%. Meanwhile, uncertainty about the economy and pandemic persists.

Darryl Brown, investment planner at You&Yours Financial in Toronto and director of portfolio strategies for Spring Financial Planning, considers which companies will respond better to pandemic headwinds and accelerating trends when he builds portfolios.

For example, Brown looks for operational and financial flexibility to deploy new products and services quickly.

Brown favours large multinationals with diverse business lines and modest debt — typically, large-cap tech companies. These firms tend to be younger, more nimble and listed on Nasdaq. In the small- and mid-cap spaces, investors are better served by active management, he adds.

Brown also examines dividend payouts and how they affect a company’s ability to finance future opportunities.

Brown’s 5% allocation to Nasdaq — using iShares NASDAQ 100 Index ETF (CAD-hedged; symbol: XQQ) — minimizes overlap with his 30% allocation to BMO S&P 500 Index ETF (ZSP). The other equity ETFs capture global exposure outside the U.S., and a minimum-volatility ETF provides “a balancing effect.” (See the list of his suggested holdings on page 19.)

Balanced portfolios should continue to allocate to traditional fixed-income assets despite historically low interest rates, Brown says. His fixed-income allocation totals 35% (including a preferred share ETF) — “a little bit more assertive than your traditional 60/40, recognizing that rates are lower right now,” he says. Furthermore, he suggests investors embrace the tried-and-true GIC asset class as part of their fixed-income mix (along with government and corporate bonds). The best five-year GIC rate on ratehub.ca was 2.3% in mid-August.

Filling out the rest of the fixed-income allocation requires creativity because of low interest rates. Brown suggests preferred shares, as long as the weighting is relatively small. Preferred shares are safer than equities, but aren’t a substitute for fixed-income, Brown says.

While Brown recommends a preferred-share ETF (Horizons Active Preferred Share ETF [HPR]) in his portfolio, he notes that selecting individual companies is more advantageous because only a handful of preferred-share ETFs have a rate reset feature (meaning they pay a fixed dividend rate, as opposed to a floating rate, until the reset date). About two-thirds of HPR’s holdings are fixed-floating, paying a fixed dividend for an initial period.

Brown also considers environmental, social and governance (ESG) factors. “Environmental leadership is going to become an increasing focus among investors,” as will social awareness, he says. For example, investors may consider companies with values that align with the United Nations’ sustainable-development goals or that demonstrate progressive values, such as a social media company that monitors hate speech.

Brown layers an ESG focus throughout the portfolio as much as possible, considering that active portfolio management is required to apply ESG methodology. Among the large-cap tech companies Brown favours, some do better on ESG standards than others, he says.

Brown’s portfolio also keeps home bias in check. For example, HPR, which invests primarily in preferred shares of Canadian companies, makes up 5% of the portfolio. The weighting reflects Canada as a proportion of the global investing universe, he says.

Alfred Lee, director of BMO ETFs, investment strategist and portfolio manager with BMO Global Asset Management in Toronto, says a balanced, recession-proof portfolio should be based on three principles: defensive growth, diversification and a core-satellite strategy.

“Managing downside risk is very important in this kind of a market,” where volatility can occur unexpectedly, Lee says. “If you lose 5% in any asset, it takes more than 5% to get back to break-even.”

The market doesn’t reward ultra high-risk investing, as it did prior to 2008, so Lee prefers defensive growth — “larger-cap, more mature companies that have a steady and predictable income stream.”

The second principle is diversification. The portfolio has to be “stable in many different macroeconomic environments,” Lee says — such as when central banks raise rates or taper quantitative easing. If the entire portfolio performs well at the same time, that’s not a good sign, Lee says. He suggests an asset allocation of roughly 50% equities, 30% bonds and 20% non-correlated assets.

The third principle is using a core-satellite strategy. The core — roughly 80% of the portfolio — represents longer-term secular ideas using broad beta or factor ETFs. The remaining 20% is thematic, with potential for generating alpha. The latter are short-term positions that can keep investors engaged, Lee says.

To address defensive growth, Lee chooses two low-volatility ETFs — one exposed to Canadian equities (ZLB) and one focused on the U.S. (ZLU). These ETFs invest in names with lower beta that are less sensitive to market movements. Rounding out his core holdings is a global ETF (ZGQ) providing exposure to blue-chip names.

One thematic choice is an iShares equity ETF (CEW) with exposure to Canadian banks and insurers. The ETF makes up for the low exposure to banks in the core positions, he says. The other thematic ETF, a global robotics and artificial intelligence fund (BOTZ), provides alpha potential.

He also chooses thematic positioning within fixed-income: exposure to non-BBB, or higher-quality, corporate bonds in Canada (ZQB) and the U.S. (QLTA). These ETFs avoid the negative interest rates outside North America.

A market-neutral anti-beta ETF (QBTL) that uses a long/short strategy can hedge against market declines — in this case, because it’s long on volatility stocks and short on the market. During March’s sell-off, this ETF performed well, Lee says. 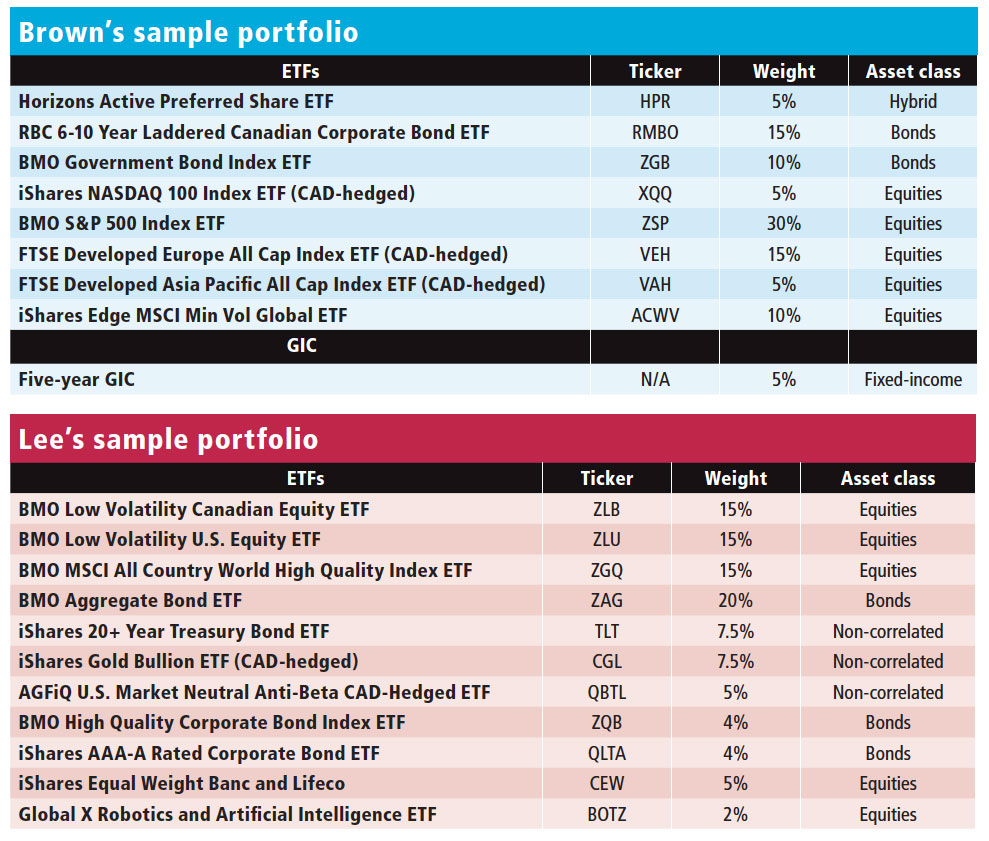 Building products for a different world

Rising to the occasion

What is the next big ETF innovation, and why?

A matter of conviction

A portfolio manager must have the discipline to stick to a process over time, especially during a crisis or a bear market

ETF portfolios with an impact

Investors watching for clues next week about monetary path

Weaker GDP data and higher inflation have muddled the picture

RRSP rollover into an RDSP can provide tax savings

New finance is ‘a platform of growth,’ portfolio manager says

Areas such as digital payments, and cryptocurrency and blockchain are increasingly making a mark