The Rockefeller Foundation and the U.S. Forum for Sustainable and Responsible Investment recently convened a symposium to address a trillion-dollar question: How do we grow the retail market for responsible investing (RI)?

I was fortunate to be the lone Canuck at this small gathering of leaders representing Morgan Stanley, Bank of America, Impax and other institutions from the U.S., Europe and South Africa. One of the key points of agreement among the group was that we, the investment industry, need to simplify RI — we need to make it easier.

Research from Canada and the United States has shown that the vast majority of retail investors are interested in RI, which refers to investments that incorporate environmental, social and governance (ESG) factors. But while investor interest in RI is strong, most know little or nothing about it.

This “RI awareness gap” — as I call it — is at least partly attributable to broader financial literacy issues. Most individual investors do not have investment training; they are busy nurses, chefs, graphic designers, teachers and countless others who are often juggling parenthood and other responsibilities that leave scarce time to develop financial expertise. That’s why they look to professionals for investment advice.

With endless demands on people’s time and attention in today’s digital world, one of the most insightful yet simple comments I heard at the symposium was that people just want to hit the “easy button.” The thesis went something like this: If only there were an easy button — an effortless way to do responsible investing — retail investors would pile into responsible investments.

Coincidentally, new evidence has emerged to support that thesis. A recent study in the Journal of Finance, written by University of Chicago academics Samuel Hartzmark and Abigail Sussman, sought to understand whether a simplified label — or an easy button — would draw more assets into funds that are deemed to be more responsible or sustainable.

To test their hypothesis, the researchers analyzed the flow of assets into mutual funds before and after Morningstar launched its fund sustainability ratings in March of 2016. Similar to its five-star rating system for risk-adjusted returns, Morningstar created a five-globe rating system to provide a simplified snapshot of a fund’s sustainability performance, based on an asset-weighted average of company-level ESG scores from Sustainalytics. A five-globe rating corresponds with a higher composite ESG score, while a one-globe rating indicates a lower score. Similar tools have been launched by other research firms such as Fundata and MSCI.

While the Morningstar ratings do not capture some important information about a fund’s sustainability profile, such as whether the fund engages with companies or how it votes on ESG proposals, the academics were interested to know how investors acted in response to the ratings. The results were remarkable. 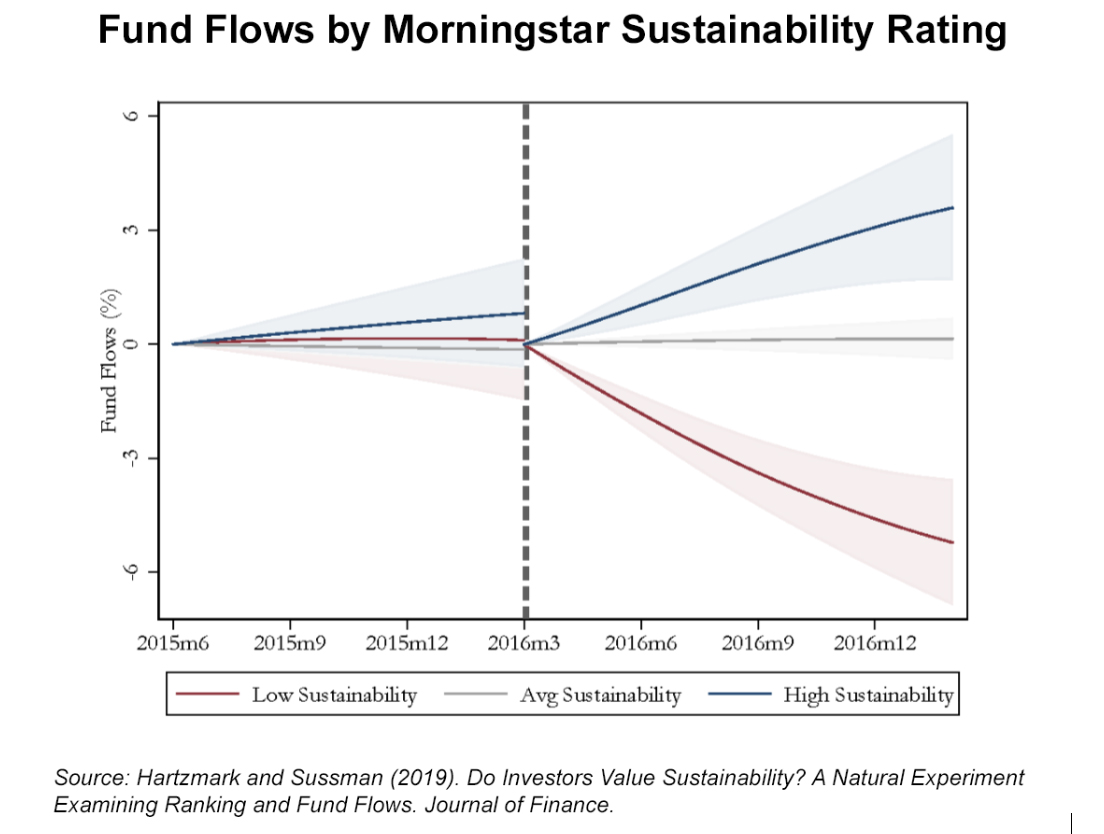 As you can see, the ratings corresponded with a dramatic change in the flow of assets. Prior to the Morningstar ratings, funds generally received similar levels of flows. However, after the ratings were launched, funds with high sustainability scores attracted inflows of about 4% of fund size over the next 11 months, while lower-rated funds saw outflows of about 6%. The academics concluded that this data is strong enough to be considered causal evidence that mutual fund investors put a positive value on sustainability.

As noted above, the ratings themselves are not perfect, but the research points to three important takeaways for the investment industry.

First, there is evidence to support the “easy button” hypothesis noted at the symposium: making RI easier to navigate will drive more assets into responsible investment vehicles. (To help on this front, the RIA recently launched the RI Marketplace to make it easier for advisors and investors to find RI products and services.) Second, funds with a focus on sustainability are gaining a competitive advantage in the quest for assets. And, above all, investors value sustainability and they are moving their assets as a result. Advisors who gain expertise in RI will be positioned to serve this growing client base.

Here comes the “S” in ESG

Here comes the “S” in ESG

As a constellation of social risks emerge, research points to opportunities for investors

Four reasons why ESG is here to stay