In addition, Credo asked survey participants to give a rating of zero to 10, with 10 being the most important, to a variety of financial matters. That list included “investments,” “retirement,” “taxes,” “charitable giving” and “insurance,” among other topics. 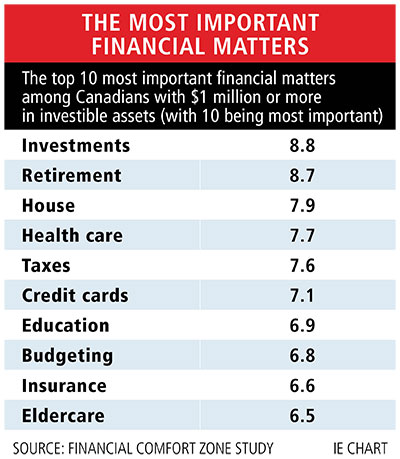 On average, HNW survey participants – defined as those who have $1 million or more in investible assets – rated investments the most important among all financial matters on the list. (See table, below at left.) In addition, that average rating was 20% higher than the average rating given to investments by Canadian investors overall.

Although the wealth-management industry has shifted largely from a product-based approach to one that emphasizes delivery of comprehensive planning services, HNW clients remain interested in the composition of their investment portfolios, says Paul Wylie, senior vice president of business development at IPC Securities Corp. in Mississauga, Ont.

“[HNW clients] are more than willing to delegate [investment decisions],” Wylie says. “However, they are asking, and want to know and understand, how their money is being invested.”

In addition, HNW investors tend to be well informed about investments and wealth management overall, and want to make sure their money is being invested in ways that align with their goals, Wylie says: “[HNW clients] are asking more about individual holdings because, in large part, advisors who serve HNW clients have done an increasingly better job of looking after the relationship.”

In particular, HNW investors place a great priority on investments that keep volatility well under control. Says Rosemary Horwood, vice president and investment advisor with Richardson GMP Ltd. in Toronto: “[HNW clients] don’t want to see big swings in their portfolio. Volatility management would be the No. 1 thing HNW individuals who come to me look for.”

Adds Shaun Hauser, co-founder, president and chief operating officer at Wellington-Altus Private Wealth Inc. in Winnipeg: “We put extra emphasis on standard deviation or volatility [when choosing investments]. The smoother the investments, the better they enjoy the ride.”

Credo’s research also suggests that HNW investors tend to own a broader range of investment products compared with Canadian investors overall. (See table, above at right.) This is particularly true for alternative investments that typically are available only to wealthier investors. For example, HNW survey participants were about eight times more likely to own private equity than Canadians overall, according to the survey results. 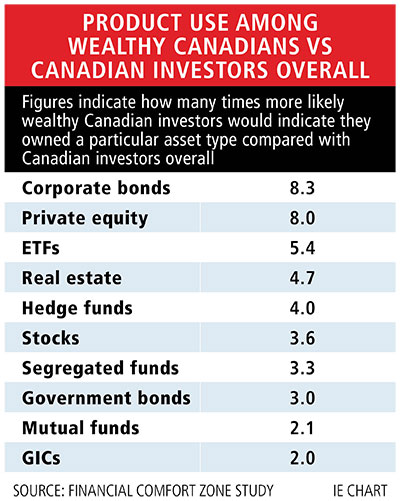 Those findings are no great surprise, says Tom Van Tighem, senior vice president, financial services, with Investors Group Inc. in Winnipeg. That’s because HNW investors have the capacity to meet higher investment minimums associated with alternative products, have greater flexibility to invest in illiquid investments and are more likely to be aware of these investments.

“As you get wealthier, there are more advisors who are interested in you,” Van Tighem says. “As a result of that, there is the opportunity to be exposed to a number of different product types.”

However, the results of the survey also show that HNW investors own retail investment funds – particularly ETFs – at a higher rate than Canadian investors overall.

HNW investors and their advisors have become more comfortable with ETFs in recent years, Wylie says: “You are getting exposure to a particular marketplace, but at a reduced cost.”

At IPC Securities, portfolios for many HNW families comprise roughly 30% in individual securities, such as stocks and bonds, and 70% in ETFs and mutual funds.

Despite the increasing interest in ETFs, mutual funds – particularly those that are actively managed – still have a place in HNW investors’ portfolios.

“When you buy a market [via a passive investment fund], you’re getting everything – the good, bad and ugly,” Wylie says. “Whereas an actively managed mutual fund will quite often focus on risk management a little bit better than [a passive ETF or mutual fund].”]

Powering up your practice

Learning the language of the next generation

Tech and the high net-worth client

The Seasons of an Advisor’s Life: Fall, a time for harvesting, productivity and shedding the old

Have You Thought About What Season Your Practice is in?

Powering up your practice

Referrals are key to boosting your roster of HNW clients

Learning the language of the next generation

The children of the wealthy have different ideas about financial advice — and those who provide it. Understanding that mindset can help retain families when...

Majority of active managers outperformed in first half of 2022, S&P reports