Canadian financial services firms continued to do well in the most recent quarter for which data are available, reflecting better than expected economic growth. (See Slowdown expected.)

Of the 43 publicly traded firms in Investment Executive’s quarterly profit survey, 21 had higher earnings and five reported positive net income vs a loss the prior year. With ECN Capital Corp.’s earnings unchanged, that left 12 companies that reported a decline in earnings, and four in a loss position. (These figures exclude Great-West Lifeco Inc. [GWL] and IGM Financial Inc., as the results of both firms are consolidated with those of Power Financial Corp.)

Seven companies raised their quarterly dividends. This includes four banks: Bank of Nova Scotia, to 85¢ from 82¢; Canadian Imperial Bank of Commerce, to $1.36 from $1.33; Canadian Western Bank, to 26¢ from 25¢; and Royal Bank of Canada, to 98¢ from 94¢. In addition, Industrial Alliance Insurance and Financial Services Inc. increased its quarterly dividend to 41.5¢ from 38¢; Fiera Capital Corp.’s quarterly dividend increased to 20¢ from 19¢; and Integrated Asset Management Corp.’s dividend rose to 3¢ from 2¢.

At the same time, CI Financial Corp. cut its dividend by almost half, to 18¢ from 35.25¢. (CI had been paying a monthly dividend of 11.75¢, but has moved to a quarterly schedule.) The company says this reduction is not a change from its policy to “return substantially all free cash flow to shareholders,” but rather gives CI more flexibility.

For example, CI plans to buy back up to $1 billion worth of its shares as a result of the cut to its dividend. So far, shareholders don’t seem to be happy with this strategy, as the stock price has fallen by about 10% since the announcement, to around $21 a share from $23.

The quarter also featured a suspension of dividend payments at struggling Callidus Capital Corp., which makes loans to businesses that can’t borrow elsewhere and has been in a loss position since the fourth quarter of 2016. Callidus has outstanding lawsuits against customers to try to collect monies owed. The company’s stock price has been on a major downward slide, to about $2 recently vs $18 in March 2017. 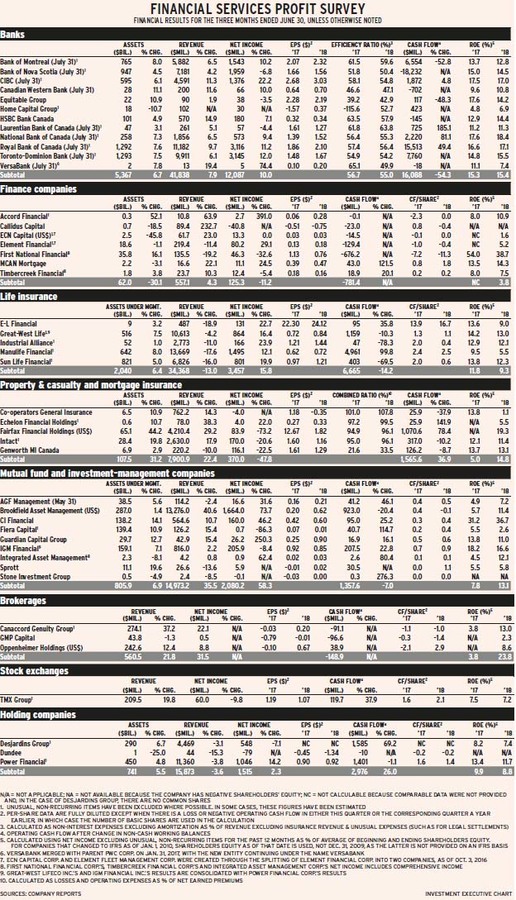 – Banks. Eight of the 12 deposit-taking institutions had higher earnings, while Home Capital Group Inc. had positive net income vs a loss in the corresponding quarter the year prior. That left only Scotiabank, Equitable Group Inc. and Laurentian Bank of Canada with lower earnings.

Home Capital still is pulling itself out of a crisis related to income verification for mortgages. The firm needed an infusion of cash, initially provided by American investment star Warren Buffett, to survive. Home Capital has beefed up its controls, and this has cut into profits: each of the past four quarters has seen net income of about $30 million – less than half of what the firm earned previously. The stock price also has fallen dramatically, to around $15 a share from a high of more than $50 in 2014.

The earning declines at the other three deposit-taking institutions are small and not worrisome. That’s particularly the case for Scotiabank, the decline for which is entirely attributable to the completion of its purchase of 68.2% of BBVA Chile, which forced Scotiabank to take on $404 billion in additional loan-loss provisions; the likely result is year-over-year declines in net income for the next three quarters. Scotiabank’s earnings would have increased if not for the extra loan-loss provisions.

Scotiabank also completed its $980-million acquisition of Jarislowsky Fraser Ltd. in the second quarter of 2018. The bank still is in the process of acquiring MD Financial Management, a deal expected to close by the end of October.

Loan-loss provisions for the group as a whole increased due to Scotiabank’s acquisition of BBVA Chile, totalling $2.4 billion vs $1.8 billion a year earlier.

Accord Financial Corp. had its highest earnings since the fourth quarter of 2015, the result of both organic growth and acquisitions.

ECN Capital and Element Fleet Management Corp. – new entities created from the split of the former Element Financial Corp. in October 2016 – appear to be sorting out their new business models.

– Life insurers. All five companies in this group had higher earnings. Revenue for the group as a whole dropped, but that’s a function of changes in the large amount of assets needed to back up insurance contracts and doesn’t reflect business growth.

– Property & casualty (P&C) insurers. Only Echelon Financial Holdings Inc. increased its net income. Three other firms had lower earnings and Co-operators General Insurance Co. was in the red. These results reflect both lower underwriting results and declines in the fair value of assets. P&C companies don’t require the same amount of assets as life and health insurers, but still need a significant amount and the fair value swings up and down.

– Mutual fund and investment-management firms. Five companies had higher earnings (all of the increases were large in percentage terms) and Sprott Inc. reported a profit vs a loss in the corresponding quarter a year prior. That left AGF Management Ltd. and Fiera with declines and tiny Stone Investment Group Ltd., which continued in a loss position.

Guardian Capital Group Ltd.’s earnings rose by 250.3%, but that was driven by a significant increase in the value of its large holding of Bank of Montreal stock. Otherwise, the firm’s pretax operating net income dropped by 7%.

Brookfield Asset Management Inc.’s earnings rose by 73.7%. The huge company had increases in the fair value of assets of US$833 million vs US$213 million in the corresponding quarter a year earlier. Brookfield continues to grow through acquisitions; the most recent financial report stated that “in the past few months, we have advanced or completed a number of large transactions.” These amounted to around US$30 billion combined.

Fiera, the other big company in the group, still is in expansion mode, continually making acquisitions. As those take time to digest, a drop in net income is not alarming. The firm’s assets under management (AUM) were $139.4 billion on June 30, more than double the $65.1 billion the company had in AUM five years earlier.

– Brokerages. All three firms in this group had positive net income vs losses in the corresponding quarter in 2017. However, GMP Capital Inc. had only $528,000 in net income – less than the preferred share dividends it pays – resulting in negative earnings per share for the quarter. GMP’s continued struggles resulted in an Aug. 8 announcement of more layoffs because of less energy-related business.

– Holding companies. Results were mixed for this group. Earnings rose at Power Financial, but dropped at Desjardins Group, while Dundee Corp. was in a loss position.

Power Financial’s results reflect those of GWL and IGM. Desjardins’ personal and business services, wealth management, and life and health insurance divisions had higher earnings. However, Desjardins’ P&C division’s net income dropped, as its combined ratio rose to 95.6% from 90.1%. Dundee has significant investments in resources firms, many of which are in a loss position.

Preparing for a second wave

Both targeted testing and isolation could combat a second wave

Trade group lays out priorities for next federal budget

Salesforce Ventures has taken a minority stake in Hearsay