With stock markets in free fall due to Covid-19, investment performance for segregated funds in 2019 may seem irrelevant. It isn’t. It’s important to understand how seg fund families handled last year’s investment environment and how they are positioned for 2020 to help you and your clients make decisions about where to invest.

Last year was a momentum year in which stocks recovered from the 20% plunge at the end of 2018 and then climbed further as recession risks receded with the U.S. Federal Reserve Board cutting interest rates three times.

Despite this, seg fund families that had the best investment performance in 2019 didn’t overload on momentum stocks; instead, they continued to focus on high-quality equities.

The seg fund family of Manufacturers Life Insurance Co. (a.k.a. Manulife) led in 2019, with 86.2% of long-term assets under management (AUM) in funds ranked first or second quartile by Morningstar Canada for the year ended Dec. 31, 2019. This mirrored the Manulife mutual fund family’s performance of 89.3%. That’s not surprising, as most seg funds are mutual funds with an insurance wrapper. (All companies are based in Toronto unless otherwise noted.)

The combined seg fund family of RBC Life Insurance Co. and RBC Global Asset Management (RBCGAM), subsidiaries of Royal Bank of Canada, also did well, with 83.6% of AUM in above-average performing funds. The family is small, with just $1.7 billion in AUM as of Dec. 31.

At $35.1 billion in AUM, Manulife’s seg fund family is the second-largest, behind London, Ont.-based London Life Insurance Co.’s $38.1 billion. The only other big family is that of Quebec City-based Industrial Alliance Insurance and Financial Services Inc. (IA), at $24.1 billion.

London Life had relatively weak performance, with 35.2% of AUM in above-average performing funds. London Life is owned by Winnipeg-based Great West Lifeco Inc., which also owns Great-West Life Assurance Co. (GWL) and Canada Life Assurance Co., both of which also have seg fund families, with AUM of $8.2 billion and $8.4 billion, respectively. Great-West Life’s seg fund family did best among the parent company’s insurance subsidiaries, at 39.9% of AUM in above-average funds, while Canada Life’s was the weakest at 31.7%.

(As of Jan. 1, 2020, these three insurance companies became one under the Canada Life name. All three have used the same investment-management team for quite some time.)

IA’s seg fund family fared a little better than the three GWL families, with 44.6% of its $24.1 billion of AUM in above-average performing funds.

The weakest performer was Mississauga, Ont-based Primerica Life Insurance Co. (10.0%). These funds missed much of the surge in equities because of their heavy weighting in fixed-income. The company uses strip bonds rather than traditional insurance contracts to meet maturity guarantees and usually lags when stocks are doing well. 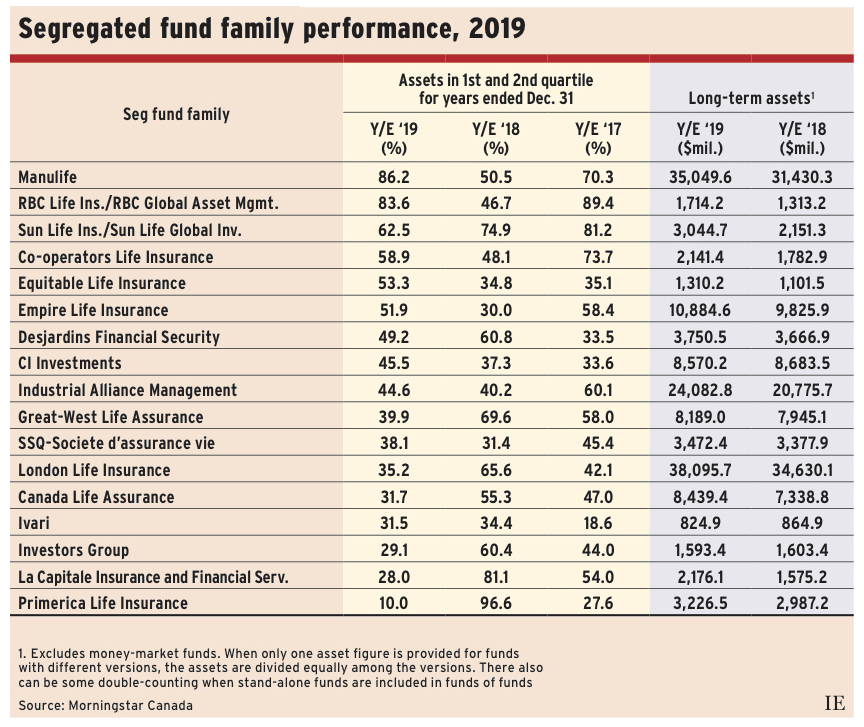 Here’s a look at some of the seg fund families in more detail:

Wilson notes that 2019 was “more difficult for most of our [portfolio] managers because their focus is on quality and reasonable valuations rather than momentum.” Nevertheless, the funds did well. The portfolio managers avoided cannabis stocks. Winners included Constellation Software Inc. and Brookfield Asset Management Inc. (BAM). BAM’s stock price has dropped along with the market due to the coronavirus, but the shares of Constellation, given it’s a tech company, have not fallen by as much.

Third-party portfolio managers that manage some of Manulife’s funds also did well. This was particularly the case for funds managed by Calgary-based Mawer Investment Management Ltd. and Montreal-based National Bank Securities Inc.

Says Lucilla Nardi, Co-operators’ assistant vice president for wealth and estate planning sales development: “There were double-digit returns for most funds, so both clients and advisors were happy.”

With the coronavirus-related drop in markets, Nardi adds, “we’re telling clients that it’s best to stay invested so as not to lose the protection provided especially death benefits.»

The fund family doesn’t favour any investment style, but offers quality funds at low prices. Says Nardi: “We are one of the few places where someone with $5,000 can get a fund managed by Mawer or by NEI Investments [i.e., Northwest & Ethical Investments Ltd.].”

Co-operators also offers Aviator-branded funds, asset-allocation funds that “mimic institutional investment strategies” featuring global exposure and are aimed at minimizing downside risk. These funds have been fine-tuned in the past year.

The portfolio managers use a value investment approach. Chief investment officer Ian Hardacre was “very happy” with 2019’s performance in a “momentum” year.

Returns for 2019 were helped by stock picks that included BAM and Cineplex Inc. BAM’s stock price dropped owing to the virus, mirroring stocks generally, but Cineplex’s has plunged as movie theaters are closed in an effort to contain the virus. (Cineplex is in the midst of a takeover by U.K.-based Cineworld Group PLC.)

Hardacre says Empire Life’s portfolio managers are now picking up quality stocks that they like, but considered too expensive before.

This fund family is diversified in the same way as the Canada Life, GWL and London Life funds. “It’s important to have both growth and value because usually one or the other style outperforms,” says Pierre Payeur, director of fund management.

But the IA family has a value tilt and last year, growth outperformed. IA’s portfolio managers also were defensive on U.S. equities in general because valuations were relatively high, Payeur says. He notes this defensiveness is paying off now.

Payeur adds that it was difficult to beat stock indexes last year, but 2020 will be a year for active investment management. In the midst of dropping stock markets, he notes, “[portfolio] managers are becoming more defensive. Cash is increasing and some managers are using derivatives to protect against downside risk.”

Portfolio managers focus on quality, but don’t rely on stock-picking as much as Manulife’s. Holdings tend to be more diversified than those of straight stock-pickers and portfolios show a conservative bias.

There are differences among the three families. GWL, which did the best among the three, has the most diversified range of strategies. London Life focuses more on asset-allocation positioning. Canada Life’s funds reflect a heavier focus on Canadian funds, and the S&P/TSX composite index’s return in 2019 was 20.5% vs the S&P 500’s 30.4%.

These differences will no longer be evident with the amalgamation of the fund families. Brent MacLellan, vice president, portfolio construction and analysis for the merged company’s fund family, says the new shelf consists of 75 funds: 36 are amalgamations of pre-existing funds; 16 were offered by GWL and London Life; 12 were available through Canada Life; and 11 are Pathways-branded funds launched in November 2019.

MacLellan adds that existing funds in the three families not being amalgamated will continue to function. However, they will be closed to new investors, although existing unitholders can still make contributions.

The strategy behind the amalgamation is to create a diverse product offering that will be competitive through full market cycles, says MacLellan.

Like Wilson, MacLellan is confident that the emphasis on quality investments means the new Canada Life family is positioned to survive the current market turmoil.

This company uses strip bonds to meet guarantees, so returns vary. In 2018, 96.6% of AUM were in above-average performing funds. Generally, Primerica’s seg fund returns are better when fixed-income has outperformed equities.

The right balance was key for seg funds

A growth spurt for fintechs

A hearing panel ordered a fine, costs and a market ban, but not disgorgement

Three key ESG trends advisors need to be aware of

How stewardship, impact measurement and net zero are shaping the RI space