This article appears in the June 2021 issue of Investment Executive. Subscribe to the print edition, read the digital edition or read the articles online.

Most financial services companies appeared to be doing very well as 2021 got underway. In the quarters ended between Feb. 28 and April 30, only four firms in Investment Executive’s Profit Survey reported lower earnings compared with a year earlier and just three were in a loss position.

But that’s not necessarily an omen of things to come, as earnings were very low in the same quarter last year. When Covid-19 hit, all 12 banks added a combined $11.7 billion to their loan-loss provisions (LLPs) in anticipation of a deep recession, and plunging equities markets produced large losses in the fair market value of assets, leading to lower revenue for many firms.

Therefore, comparing companies’ performance with the previous quarter may be more meaningful than a year-over-year analysis. Sixteen firms reported lower earnings quarter over quarter and three were in a loss position. But overall, quarter-over-quarter earnings for the 43 firms in the survey were still up by an average of 7.2%.

Another factor to consider is bank earnings, which increased this quarter because banks didn’t have to raise their LLPs by much, if at all. Collectively, the 12 banks reported a small LLP increase of $108.1 million compared with an increase of $1.7 billion in the previous quarter.

When the economy is growing at a healthy pace, the banks tend to increase LLPs by $1.5 billion–$2 billion each quarter. Had the banks increased their LLPs by $1.7 billion in the latest quarter, their earnings would have dropped about 3%–4% from the previous quarter instead of increasing 5.6% — and average earnings for all 43 companies in the Profit Survey would have increased by only about 3.5%, rather than by 7.2%.

All the deposit-taking institutions reported higher earnings compared with a year ago, but earnings fell quarter over quarter for two banks: Canadian Western Bank (by 4.0%) and Equitable Group Inc. (by 3.1%).

Canadian Western’s decline in net income was because of its higher LLPs quarter over quarter. Its LLPs rose to $14.8 million from $13.5 million, although the provisions were much smaller than the $34.9 million set aside a year earlier.

In Equitable’s case, revenue dropped by 1.2% in the quarter while non-interest expenses rose by 3.6%.

The other three finance companies — Accord Financial Corp., First National and MCAN Mortgage Corp. — reported positive net income compared with a loss in the corresponding period in 2020.

Compared with the previous quarter, however, net income dropped for three companies: Firm Capital’s dropped by 0.2%, First National’s dropped by 23.9% (but the company still raised its dividend) and MCAN’s dropped by 27.9%.

Manulife describes core earnings as reflecting “the underlying earnings capacity of the business.” Core earnings exclude the impact of changes in financial markets and in actuarial assumptions, which could reverse in the future. Changes in interest rates are critical for lifecos because most of their assets are in fixed income and the formula to determine long-term liabilities is based on prevailing government bond yields.

If rates rise, the increase would lower the value of assets, raise the amount of long-term liabilities and lower net income. (A rate decrease would have the opposite effect.) Long-term yields rose sharply in the first quarter of 2021, negatively affecting Manulife’s net income quarter over quarter and year over year.

In the latest quarter, Manulife saw a $17.1-billion decline in the fair market value of its assets while its insurance contract liabilities dropped by only $13 billion.

The other lifecos were also affected by these factors during the quarter, but not as negatively.

Fairfax is an anomaly in the group because it invests directly in private companies and utilizes sophisticated tools such as derivatives, which can cause large swings in the fair market value of its assets. In the latest quarter, Fairfax reported US$842 million in fair market gains, down from US$1.2 billion in the previous quarter.

None of the losses was surprising. Dundee mainly manages investments in resources companies, RF is focused on building its wealth-management franchise and Stone continues to struggle to become financially viable.

As for the companies with lower income, AGF’s expenses rose by more than its revenue, CI wrote down its assets and investments by $7.1 million and Fiera continues to absorb acquisitions.

Both Canac­cord and Oppenheimer Holdings Inc.’s earnings rose year over year. Canaccord’s also rose compared with the previous quarter (93.2%), but Oppenheimer’s dropped by 52.8%.

TMX Group reported higher earnings, both year over year and compared with the previous quarter.

Desjardins Group’s earnings rose year over year, but earnings dropped by 8.9% compared with the previous quarter. 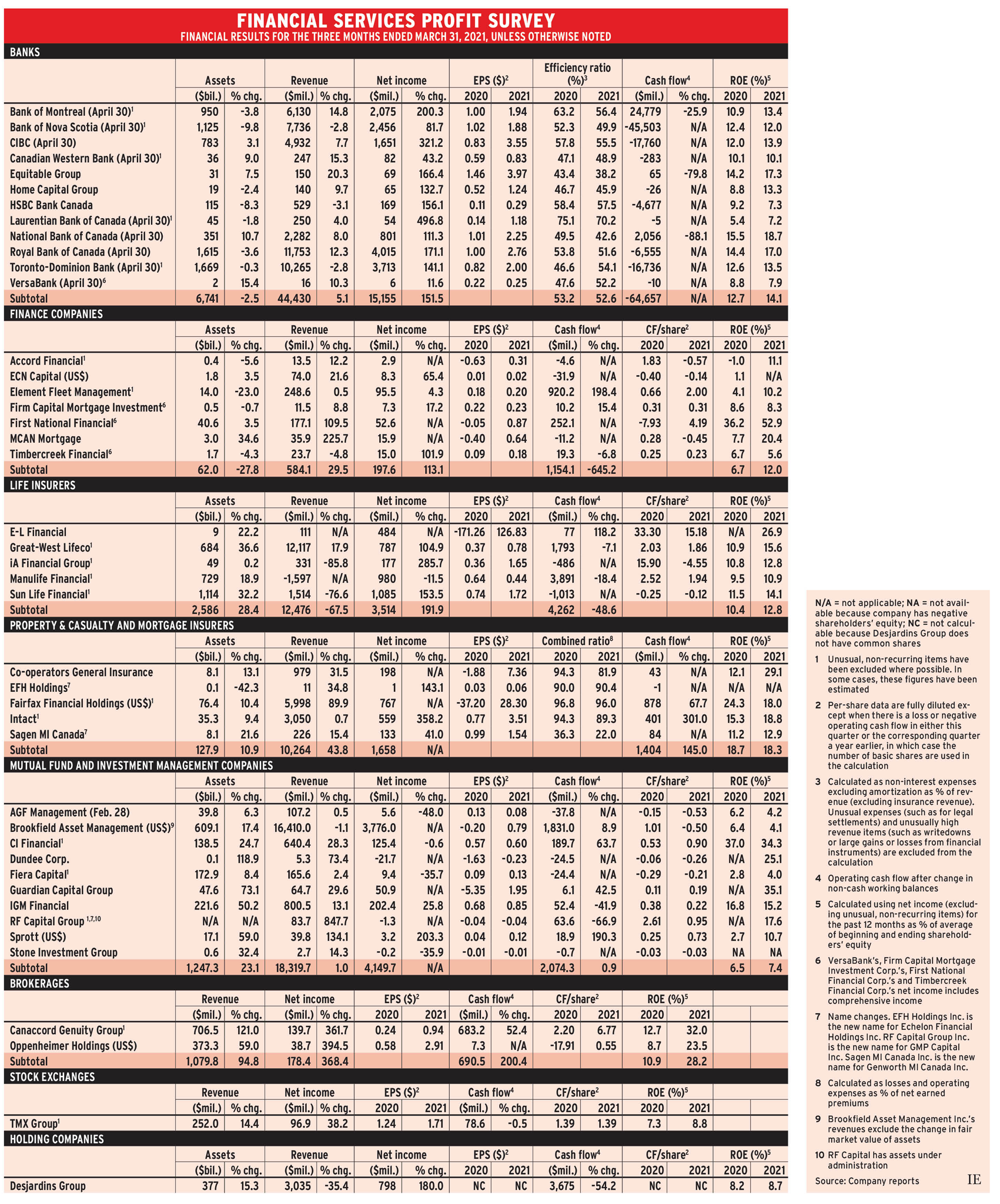