Financial services companies are feeling the drag of slower economic growth. A key indicator is bank loan-loss provisions, which shot up in the quarter ended Oct. 31, indicating banks’ concerns that more borrowers won’t be able to make their loan payments.

Investment Executive’s profit survey covers financial results for quarters ended between Aug. 31 and Oct. 31, 2019. For most companies, that means quarters ended Sept. 30, but it’s Oct. 31 for most banks and Aug. 31 for AGF Management Ltd.

Of the 40 companies in the profit survey, 19 had lower net income than in the corresponding period in 2018 and four were in a loss position. For the others, Desjardins Group’s profits were unchanged, 15 companies had higher earnings and Element Fleet Management Corp. reported positive net income vs a loss a year earlier. (These figures exclude Great-West Lifeco Inc. [GWL] and IGM Financial Inc., the results of which are consolidated with Power Financial Corp.’s.)

Among the Big Five banks, Bank of Montreal (BMO), Canadian Imperial Bank of Commerce (CIBC) and Royal Bank of Canada had lower net income, while gains at Bank of Nova Scotia and Toronto-Dominion Bank (TD) were less than 2%.

Nevertheless, nine companies raised their dividends, including four firms that reported lower earnings than a year earlier: BMO, Laurentian Bank of Canada, Sun Life Financial Inc. and Genworth MI Canada Inc. This indicates that these firms continue to be optimistic about their prospects.

The quarter was a busy one on the acquisition front.

GMP Capital Inc.’s shareholders approved the sale of “substantially all” of its capital markets business to U.S.-based Stifel Financial Corp., a deal that closed on Dec. 6. GMP plans to buy the two-thirds of Richardson GMP Ltd. that it doesn’t own. 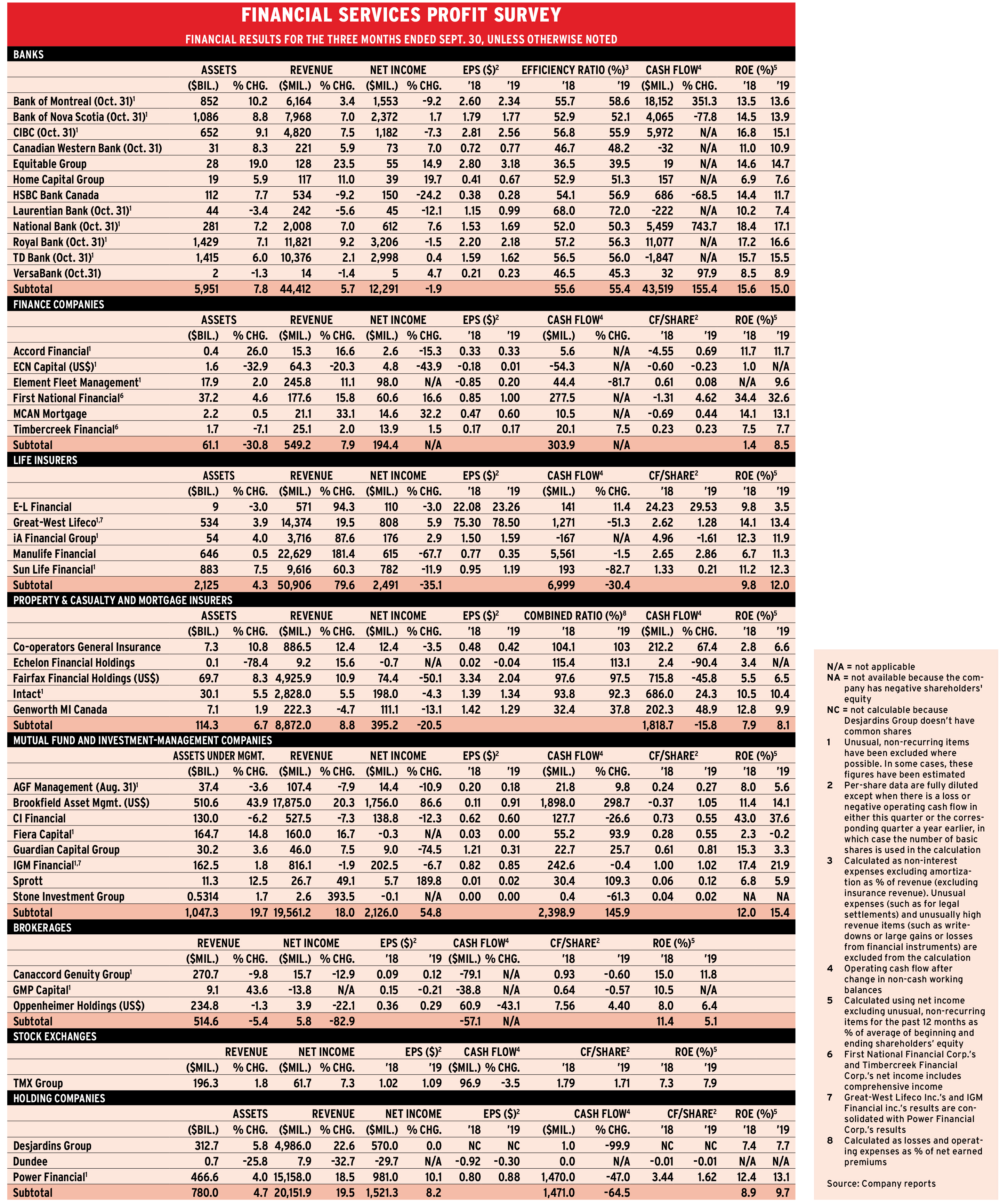 The largest earnings gain in the industry was Home Capital Group Inc.’s 19.7%. That’s encouraging for a company that has had to claw back up from its 2017 credit crisis. But both the stock price and net income are still well below previous highs and the company hasn’t yet resumed paying a dividend.

The biggest drop in net income is HSBC Bank Canada’s 24.2%. The bank had a $17-million increase in loan-loss provisions in the quarter vs a drop of $7 million a year earlier.

A couple of large items affected results among the big banks. CIBC had an impairment charge of $135 million this quarter, related to the anticipated sale of its controlling interest in FirstCaribbean International Bank Ltd. Without that charge, net income would have been up by 3.3%.

BMO’s results were affected by a $203-million “benefit from the remeasurement of an employee- benefit liability” in the corresponding quarter. Without that benefit, net income this quarter would have been up by 3.1%.

ECN and Element were spinoffs from Element Financial Corp. in 2016. Element Fleet has finished the transition, but ECN is still in the final stages of divesting legacy assets to focus on core businesses.

Revenue for these companies can swing significantly, depending on changes in the fair market value of assets supporting insurance and investment contract liabilities. This quarter, revenue was up notably, but that doesn’t show on the bottom line because of offsetting changes on the expense side.

Manulife Financial Corp.’s 67.7% drop was the result of negative impact from financial markets and regulatory changes in rate assumptions. Sun Life also was affected by these, but to a much lesser extent. Both companies report core or underlying earnings. For Manulife, this measure was little changed between Q3 2018 and Q3 2019. Sun Life reported an 11% gain.

Four of the five companies in this category had lower net income and Echelon Financial Holdings Inc. was in a loss position.

Only Co-operators General Insurance Co. and Echelon had underwriting losses. Fairfax Financial Holdings Ltd.’s and Intact Financial Corp.’s were pulled down by losses on the fair value of investments. This was particularly so for Fairfax, as it is an aggressive investor. It had US$96.7 million in fair value losses vs a gain of US$41.2 million the year before. Intact had losses of $38 million this quarter vs $24 million a year earlier.

Brookfield and Sprott Inc. were the only two of eight companies (including IGM) in this category with an increase in net income, and they were huge: 86.6% and 189.8%, respectively.

Brookfield is involved in infrastructure projects, real estate, renewable power and private equity; large changes can occur in the fair value of these assets. In this quarter, there were US$394 million in fair value changes vs US$132 million in Q3 2018. The company had a big jump in assets under management, to US$510.6 billion from US$354.7 billion, as well as a jump in equity accounting income to US$414 million from US$50 million.

Sprott had a $791,000 gain on proprietary and long-term investments in the quarter vs a $4.9-million loss a year earlier.

Fiera had a small loss vs positive net income a year earlier and Guardian Capital Group Ltd.’s earnings were down by 74.5%. Neither drop is alarming. Fiera continues to grow by acquisition and it will take time for those acquisitions to reflect in earnings. Guardian’s results are heavily influenced by the value of its large holding of shares in BMO. That holding lost $4 million in value in the quarter vs a gain of $18.4 million a year earlier.

The three big independent mutual fund companies each reported net redemptions in the quarter: AGF, at $103 million; CI Financial Corp., at $1.5 billion; and IGM, at $1 billion.

Given the uncertainty in financial markets, it’s not surprising that Canaccord Genuity Group Inc. and Oppenheimer Holdings Inc. saw earnings drop and GMP reported a loss.

TMX’s net income was up by 7.3% as revenue rose a little while expenses were a bit lower.

Dundee Corp. remained in a loss position; Desjardin Group’s net income was unchanged; and Power Financial’s earnings rose as the increase at GWL offset the lower net income at IGM.

OBSI under the microscope, again

Little action has been taken since previous review in 2016

Amid “lightning fast” industry transformation, Laura Paglia looks to deal with issues such as technology, regulation and ESG