Three small segregated fund families led investment performance in 2018, a year in which most stock prices finished lower than at the start of the year. As for bond yields, they were relatively flat for the year despite a fourth-quarter increase, as increases in the U.S. Federal Reserve Board’s overnight rate were priced in.

That meant negative returns for most equity, balanced, portfolio and asset-allocation funds and even some fixed-income funds. For many seg fund families, this resulted in lower assets under management (AUM) as of Dec. 31, 2018, compared with the year previous. 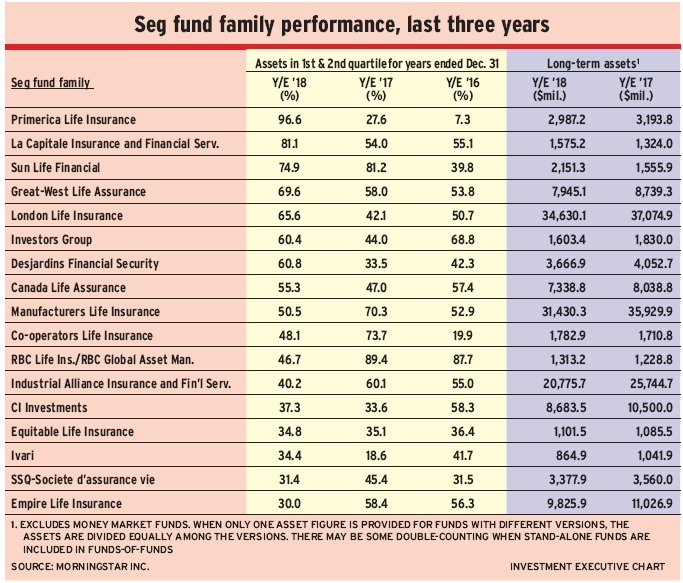 These drops in AUM were primarily market-driven as opposed to reflecting large redemption volumes or weak sales.

Volatility and turmoil present challenges, but they can be managed. The key is to minimize downside risk in order to preserve capital and take advantage of the investment opportunities that emerge. That’s what the top-performing families did in 2018.

Primerica Life Insurance Co. of Canada had 96.6% of its long-term AUM in funds ranked in the top two quartiles as of Dec. 31, 2018. This small family uses strip bonds rather than traditional insurance contracts to meet maturity guarantees and, thus, usually holds more fixed-income vs equities than its peers. That allocation minimized the decline in returns that came with the end-of-year bear market for equities.

La Capitale picks mutual funds that it considers best in terms of long-term performance, risk-adjusted returns and low volatility, and offers them with a death benefit and no maturity guarantee.

Achieving high performance numbers is harder for big seg fund families because they offer a wide variety of fund styles. Still, the results for London Life were very good, at 65.6% of its long-term AUM held in above-average performing funds at yearend.

Winnipeg-based Great-West Life Assurance Co.’s family, with $7.9 billion in long-term AUM, also did well, at 69.6% of AUM ranked in the top two quartiles. Great-West Life, London Life and Canada Life Assurance Co. are owned by Great-West Lifeco Inc. of Winnipeg. (See story on page 14.) All three firms use portfolio managers from the same in-house investment-management company, GLC Asset Management Group Ltd., but the three families have different mixes of funds. Canada Life’s family lagged its siblings in 2018, although at 55.3%, it still had good results.

The other large family is Manulife’s. The firm also had more than 50% of its AUM in the top two quartiles – barely.

Here’s a look at the seg-fund families’ performance in 2018:

> Primerica Life Insurance Co. of Canada. President Jeff Dumanski accepts that the family’s performance will swing widely. Last year was excellent, but the family had only 27.6% of AUM in above-average performing funds in 2017, and just 7.3% in 2016. The funds do well when fixed-income has better returns than equities because of the amount of bonds with near-term maturity dates that the funds must hold. But that doesn’t mean they ignore equities. Stock selection is important and, Dumanski says, it helped last year.

> La Capitale Insurance and Financial Services. This company is unique because it doesn’t offer maturity guarantees. Joe Tari, regional vice president of sales for Ontario and the Western Region, explains that while clients aren’t concerned about maturity guarantees, they do want to get at least the money they invested back upon death. Absence of maturity guarantees also enables the company to charge lower fees.

The fund lineup is straightforward. “We keep it simple by offering a limited number of funds,” says Michel Lafrance, vice president, product development, individual insurance and financial services. He notes that the firm doesn’t offer highly specialized funds because those funds tend to be volatile.

Sun Life’s seg funds also had excess cash from selling equities when prices were high last year. That cash will be redeployed, Adatia says, “as markets settle a little more.” There’s still too much uncertainty to go on a buying spree, he adds.

The first quarter will be the most important of the year, says Adatia: “We’ll get some resolution of the U.S./China trade war and Brexit, and there’ll be more discussion on what the Fed and the Bank of Canada will do.” He anticipates continued volatility in the markets, which could mean returns for this year as a whole may be similar to what’s happened so far in 2019.

> Canada Life Assurance Co., Great-West Life Assurance Co. and London Life Insurance Co. “There was a complete reversal in 2018 from growth- and momentum-driven markets to a sell-off and emphasis on defensive and quality stocks,” says Brent MacLellan, vice president, portfolio construction and analysis, for all three firms.

This shift benefited asset-allocation and balanced funds in the three families – particularly those of Great-West Life and London Life. Canada Life holds more of its AUM in pure equity funds and thus did not fare as well, although more than 50% of its AUM was in outperforming funds.

Of the three families, Great-West Life’s has had the best and most consistent performance over the past six years. MacLellan puts that down to a more diversified lineup. Both London Life and Canada Life have large funds, the performance of which can significantly affect the families’ performance.

MacLellan foresees volatility picking up in 2019, which will mean more buying opportunities. “It’s hard to find quality stocks at attractive prices in bull markets,” he says, “so this bodes well for the three seg-fund platforms.”

> Manulife This family has large funds, the fortunes of which tend to have a significant impact on its investment performance, says Brent Wilson, director, investment research and analysis, investment management services. In 2018, the impact was negative.

Most versions of four of the six biggest funds ranked in the third or fourth quartile last year – including Manulife Monthly High Income Fund, which had $4.4 billion in AUM on Dec. 31, 2018 (13.9% of the family’s long-term AUM). Wilson isn’t worried about that fund, however, pointing out that it was overweighted in equities compared with its peers in a year in which stock prices plunged at yearend.

But even with the relatively weak performance of these big funds, the family still had slightly more than 50% of its AUM in funds with above-average performance. One factor was an underweighting in energy, thereby missing the full impact of the sharp drop in oil prices in the fourth quarter of 2018. Manulife’s portfolio managers, who tend to look for high-quality companies with attractive valuations, also didn’t hold large positions in the FAANGs (Facebook Inc., Apple Inc., Amazon.com Inc., Netflix Inc. and Alphabet Inc. [a.k.a. Google]) and so weren’t hurt as those stocks plummeted at yearend.

Like Adatia and MacLellan, Wilson anticipates continued volatility in 2019, which will provide buying opportunities.

> Industrial Alliance Insurance and Financial Services Inc. This family didn’t fare well, with just 40.2% of AUM held in above-average performing funds. As was the case with Manulife, IA’s performance was affected by a number of large funds slipping below average, says Pierre Payeur, director of fund management. These included IA Bond Fund ($2.8 billion in AUM as of Dec. 31) and IA Diversified ($2.2 billion). Together, the three funds account for 23.9% of the family’s long-term AUM.

Payeur notes that IA Bond Fund ranked just third-quartile, with returns for its six versions averaging -1.12% compared with an average return for all Canadian fixed-income funds of -0.89%. He attributes that underperformance to factors such as not getting the best duration at various points during the year.

Reasons for IA Diversified Fund’s underperformance include an overweighting in equities, securities selection within equities and some currency hedging that didn’t work out as hoped. Payeur notes that the fund’s portfolio managers bought equities too early, when prices were dropping at the end of the year: “We could have waited a few more weeks.” But those purchases already are enhancing returns in 2019.

> Empire Life Insurance Co. The family’s global funds did well, but the Canadian funds weren’t as strong, says Ian Hardacre, CIO. Empire’s Canadian equity funds were overweighted in energy, a sector affected negatively by recent drops in oil prices. In addition, the larger Canadian mandates have concentrated portfolios of 40 to 45 stocks and, for the first time in many years, had no cash buffer. He notes that the stocks in these funds rebounded nicely into mid-February.

Hardacre describes the company’s investment style as “value but not deep value.” Portfolio managers look for high-quality stocks at attractive prices and usually hold for an extended period.

Seg funds positioned to ride out the storm

The right balance was key for seg funds

Programs aim to root out bias from customer service, but more work is needed