This article appears in the January 2022 issue of Investment Executive. Subscribe to the print edition, read the digital edition or read the articles online.

Financial services companies signalled optimism about their prospects, as 14 of the 42 companies in Investment Executive’s Profit Survey increased dividends or announced special dividends this past fall.

The average earnings increase was 35.2%, but that figure was buoyed by a huge increase in net income for Brookfield Asset Management Inc. (BAM), as well as the fact that most banks didn’t need to increase their loan-loss provisions (LLPs). In fact, in the quarter ended Oct. 31, the banks reduced LLPs by $261 million overall, following a drop of $455 million in the previous quarter.

Normally, the banks add between $1.5 billion and $2.5 billion of LLPs each quarter, so the declines in LLPs pushed up bank earnings and the average net income increase for the companies in the survey as a whole. Had the quarter’s LLPs been $2 billion, the year-over-year increase in net income for the banks would have been 14.7% instead of 32%, and the overall increase would have been 24.3%.

BAM, the biggest company in the survey by revenue, posted revenue this quarter of $19.2 billion. Its earnings are volatile because of constant changes in the fair value of its investments and the uneven flow of the acquisitions and dispositions that are part of its business model. In this quarter, BAM reported gains in both fair value and net dispositions, totalling $1.8 billion. Combined with higher earnings from operations, the company reported a $2.2-billion increase in net income from a year earlier.

Excluding BAM and the banks, the average gain in profits for the other 29 companies was only 12.7%.

Equitable Group Inc. did a two-for-one stock split on Oct. 15 and adjusted its quarterly dividend accordingly, to 18.5¢ per share from 37¢.

Here’s a closer look at the sectors:

Laurentian booked a $77.9-million after-tax impairment charge in its personal banking division. Laurentian’s 2021 annual report stated this “reflects the recent decline in assets and deposit volumes,” which, along with prevailing economic conditions, “made it challenging to retain existing customers and acquire net new ones.”

Equitable’s and Home Capital’s net income declines were single-digit percentages and not worrisome.

All the Big Six banks reported substantial earnings increases, ranging from RBC’s 19.9% to CIBC’s 50.5%. Among the six, only Bank of Nova Scotia and CIBC increased their LLPs, but only by $168 million and $78 million, respectively.

ECN’s 188.2% rise in net income reflects much stronger increases in revenue than expenses (43.4% versus 17.6%, respectively), plus a jump in earnings for businesses being sold (to US$13.6 million from US$7.4 million).

Element services vehicle fleets, for which demand has been muted by the pandemic; First National reported a big decline in deferred placement fees; and both MCAN and Timbercreek reported sizable drops in revenue.

E-L Financial Corp. and Manulife reported lower earnings, while Great-West Lifeco, iA Financial Group Inc. and Sun Life reported higher net income. E-L’s drop was because of much lower increases in the fair value of investments in this quarter, at $9.5 million compared with $215.9 million a year earlier.

As for Manulife, despite an overall net income drop of 26.6%, the firm reported an increase of 10% in core earnings on a constant exchange-rate basis. Net income was higher in Canada and for the company’s global wealth and asset management divisions, and down in the U.S. and Asia.

Fairfax’s gain was huge because net income a year earlier was very weak. The company’s earnings are volatile because, unlike most insurers, it invests in equities and private companies.

The other companies focus on insurance operations. Both Co-operators General Insurance Co. and Intact had lower underwriting profits, but Intact managed a 4% gain when excluding charges related to the acquisition of U.K.-based RSA Insurance Group Ltd.

CI Financial Corp.’s net income dropped by 62.9% thanks to $50.3 million in foreign-exchange losses and a $61.4-million drop in the fair value of acquisition liabilities.

Guardian Capital Group Ltd. reported the biggest drop in percentage terms, down by 79.8% due to a drop in the fair value of investments of $8.1 million versus a gain of $35.7 million a year earlier.

Desjardins Group reported a 54.3% earnings gain that was driven by the company’s property & casualty insurance arm, where earnings rose by 86.5% to $289 million. 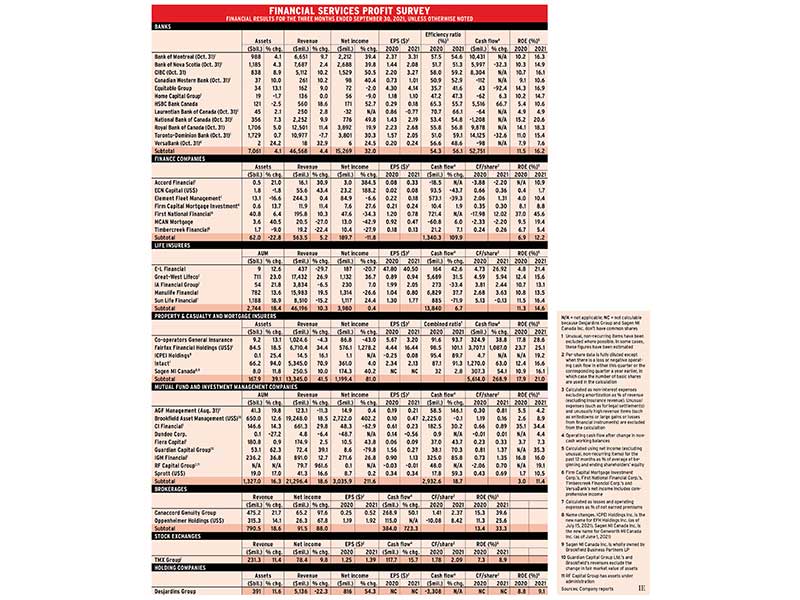 Anti-flipping proposal may get bogged down with exemptions

Nonetheless, the budget proposal would provide clarity to the Canada Revenue Agency

Low-carbon investing is not a simple decision

Responsible investing can mean avoiding fossil fuels, or it can mean investing in and engaging with energy companies

Help your client split income with a prescribed rate loan

Consider the strategy now before the rate rises on July 1

MFDA alleged over $300,000 was taken through early GIC redemptions, withdrawals

Economy faces a reset, not a recession: TD

The path to greater energy security won't be quick