This article appears in the March 2021 issue of Investment Executive. Subscribe to the print edition, read the digital edition or read the articles online.

The economic and social disruption wrought by Covid-19 spoiled many aspects of life in 2020, but for the investment industry, the year turned out to be bountiful.

While many people have suffered mightily due to the pandemic, data from the Investment Industry Association of Canada revealed record revenue and profits for the investment business last year. Total operating revenue rose to $25.9 billion in 2020, up by 9.4% from $23.6 billion the previous year (all dollar figures have been rounded). Operating profit passed the $9.0-billion mark, surging by 19.6% from slightly less than $7.6 billion in 2019.

Amid the improved bottom line, the industry added more than 1,000 jobs: total employment rose to 44,529 from 43,476 during the year. Even with the bigger workforce, average productivity (measured as revenue per employee) rose as well.

Despite the pandemic’s many disruptions, the investment industry never missed a beat. Almost every line of business grew in 2020 as the industry faced market turmoil, which was met with extraordinary monetary and fiscal support along with regulatory forbearance.

In the first quarter of 2020, when financial markets reacted to the emergence of the pandemic with a spike in trading volume and volatility, the Canadian brokerage business generated record equities trading revenue of more than $2.9 billion — well above the previous high of $1.7 billion, and only the third time that quarterly revenue has topped $1 billion since 2008.

Equities trading revenue turned negative in the second quarter, however, and stayed that way for the rest of the year, leaving the industry with just $174 million in annual revenue from that business segment by the end of the year.

For fixed income, the revenue surge came in the second quarter. Revenue from fixed-income trading jumped to a record $1.2 billion in Q2, blowing away the previous high of $825 million. That second-quarter spike proved to be a blip, however, as quarterly revenue dropped in the third and fourth quarters of 2020, leaving annual fixed-income trading revenue down slightly from the previous year.

Commission revenue rose too, growing by about 16.5% in 2020. Revenue jumped by almost 25% in the first quarter compared with the fourth quarter of 2019, and remained elevated for much of the rest of the year. Total commission revenue for the year finished above $6 billion for the first time since 2007.

This increase came on the heels of a decade of mostly stagnant commissions as the industry has increasingly shifted to fee-based arrangements. Fee revenue has been on a relentless march higher ever since a temporary dip in response to the global financial crisis of 2008–09.

The pandemic didn’t have the same impact as the financial crisis on fee revenue, however. Despite the plunge in global markets in March 2020, industry fees rose slightly in Q1 2020 to $2.40 billion from $2.39 billion in Q4 2019. Revenue from that segment continued increasing in each successive quarter as markets recovered, finishing the year at $2.59 billion in the fourth quarter.

For the year, fee revenue fell just shy of breaking the $10-billion mark for the first time, ending the year at $9.9 billion, up from $9.1 billion in 2019. Annual industry fee revenue has more than doubled since 2014, when it was slightly more than $4.6 billion.

Alongside fees and commissions, the next largest source of industry revenue — investment banking — also rose in 2020, as issuance activity hit record levels in response to the economic disruption caused by the pandemic. This increase in underwriting business (up by about 28% on average, year over year) was partly offset by a drop in merger and acquisition activity (advisory revenue declined by 9.4%). Yet overall investment banking revenue still rose to more than $3.5 billion from $3.1 billion in 2019.

The one area the pandemic affected negatively was net interest revenue, which dropped to $1.9 billion in 2020 from $2.3 billion in 2019 as interest rates were slashed to near zero in response to the initial economic damage. As for operating expenses, they rose modestly, edging higher by 4.3% year over year to $9.95 billion.

Regulators granted the industry relief measures such as excusing late filing fees and allowing modified compliance arrangements. Governments and lenders also sought to contain the economic fallout of the pandemic and provided their own relief measures.

Ultimately, strong revenue growth allowed industry profits to surge in 2020. While operating profit rose by almost 20%, net profit increased by 24.4% last year. Shareholders’ equity rose by more than 13% year over year, and the industry’s annual return rose to 16.5% from about 15%, where it had hovered for the past four years.

The large, integrated dealers that dominate the Canadian brokerage business enjoyed their fair share of these gains, but the boutique segment of the industry really feasted in 2020. Operating profit for retail-only firms collectively jumped by about 50% last year, and institutional boutiques saw their collective profit surge by more than 66%, topping $1 billion for the first time since 2010.

Within the retail brokerage segment, full-service dealers blossomed in 2020. Operating profit at those firms collectively rose by 61% from the previous year to a record $651 million — the previous high was $435 million in 2018 — and net profit was up by 76.9% year over year. That jump pushed the annual return for these firms to 22.2% last year from slightly less than 15% in 2019.

While fee revenue remained a key driver for full-service retail firms in 2020, those firms also benefited from the spike in trading activity, which pushed their commission revenue to more than $1 billion for the year, up by 31.9% from the previous year and edging out fees as the top revenue source.

Full-service dealers also led the way in head-count growth, adding more than 600 jobs during the year (more than half the overall industry increase), as employment in this corner of the industry rose by 9.5% from the previous year.

Even with the increase in head count, full-service retail firms realized strong productivity gains, with average employee productivity rising by 17.3% year over year, compared with 5.4% for retail introducing firms and 4.1% for the large integrated dealers. (Institutional boutiques experienced a higher boost in productivity, but this came with a drop in employee numbers.)

When the pandemic hit, severe lockdowns were imposed and markets plunged. Rough seas for the investment business seemed inevitable. Now, a year after Covid-19 was declared a pandemic, we know the looming disaster turned out to be a banner year for Canadian investment dealers. 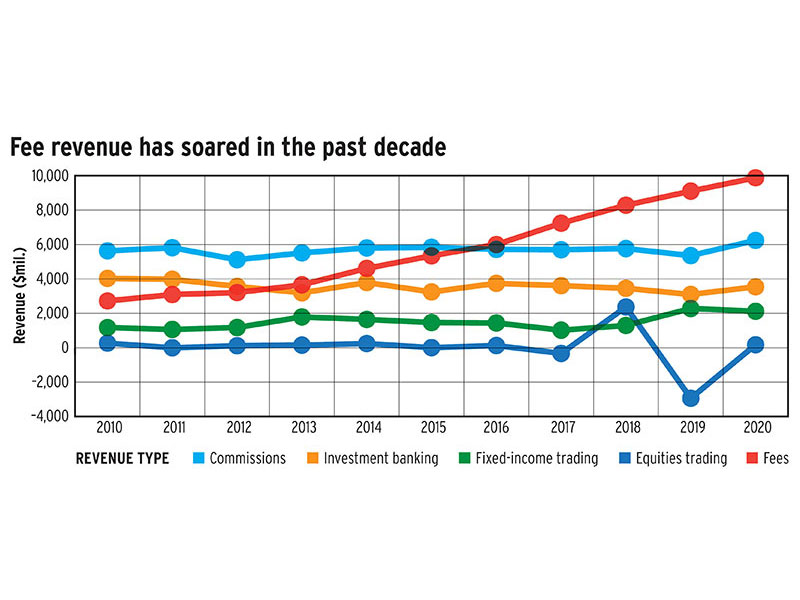 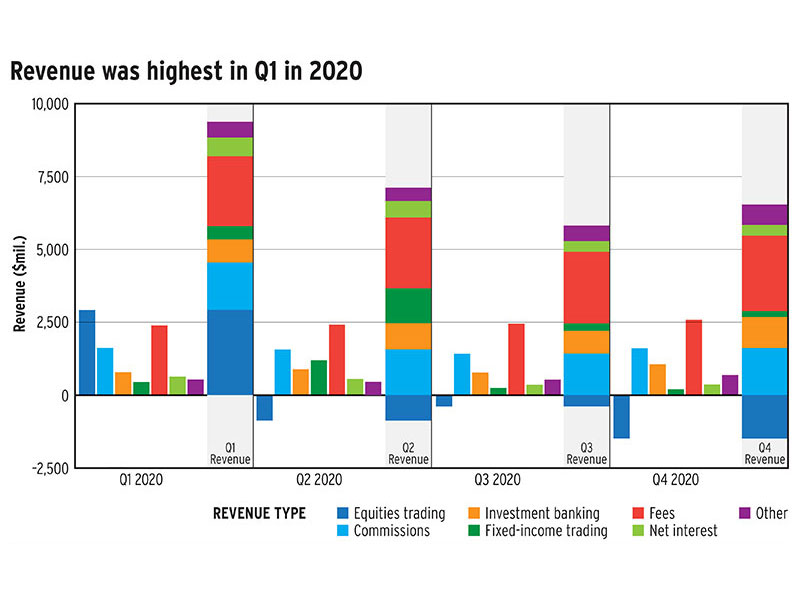 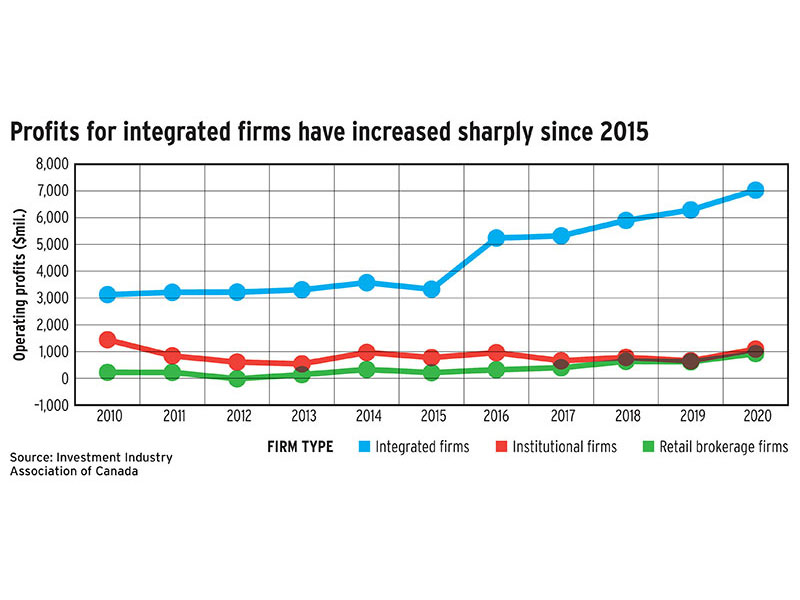