Unsurprisingly, earnings for most financial services companies were higher in the quarter ended between May 31 and July 21 than in the corresponding period the previous year — after all, much of the country was locked down last year. Of the 43 companies in Investment Executive’s quarterly Profit Survey, 34 had higher earnings than the year prior, and another four reported positive net income compared with a loss the year before.

Even more impressive, 34 firms had higher earnings than in their pre-pandemic quarter ending between November 2019 and January 2020.

In the quarter ended in May–July 2020, 22 of 41 firms reported lower earnings compared with the same quarter in 2019 and three had losses. The banks had anticipated massive loan losses and booked $7 billion in loan-loss provisions on top of the $11.7 billion added in the quarter ended April–June 2020. (Provisions normally are $1.5 billion–$2.5 billion in a given quarter.)

Turns out, the banks were overly cautious: notwithstanding the excessive loan-loss provisions, they actually performed better in the same quarter a year ago. This year, the banks added only $108 million to their loan-loss provisions in the quarter ended in February–April and reduced the provisions by $455 million this quarter. Had the 12 banks booked $7 billion in this quarter, they would have had 12.4% lower net income compared with last year’s quarter rather than an increase of 57.7%.

Brookfield Asset Management Inc. (BAM) was the firm in the survey most affected by the pandemic because it is directly involved in many industries, including infrastructure, real estate and power generation. About 75% of its businesses are backed by contractual cash flows, but the remaining 25% — which include hotels, retail centres and real estate rentals — were hit hard, with some reporting no income in Q2 2020.

All 12 deposit-taking institutions had higher earnings year over year. Net income for all but Toronto-Dominion Bank and VersaBank was up from the quarter ended April–June, and they were each down by less than 6%.

Only four banks increased their loan-loss provisions in the quarter — Bank of Nova Scotia, Canadian Western Bank, Laurentian Bank of Canada and VersaBank — and they added less than normal.

“There’s a question about how much government stimulus helped to insulate the Canadian banks. But the general view is that the stimulus didn’t kick the bucket down the road but rather served as a buffer,” said John Mackerey, senior vice-president of credit ratings for North American financial institutions with DBRS Morningstar Inc. in New York.

Caution is understandable. The economy is recovering, but, as Laurentian Bank’s report on this quarter’s results noted, government pandemic supports are decreasing and most payment-deferral measures have ended. The recovery may also be uneven, as VersaBank’s report suggested: “Expected credit loss amounts will continue to exhibit some volatility over the course of the coming quarters.”

In the case of Scotiabank, Mackerey noted its exposure to Latin America, where many countries were hit by Covid later than Canada was, thereby delaying loan losses.

Accord Financial Corp. and Element Fleet Management Corp. had lower net income, while the other five companies reported increased earnings.

Accord buys other businesses’ accounts receivable at a discount and Element manages vehicle fleets. Both companies therefore are more exposed to the goods production side of the economy than the other five. Of those, ECN Capital Corp. offers services to financial services firms and the other four are mortgage providers.

E-L Financial Corp. Ltd. was the only lifeco reporting a drop in earnings. E-L derives a lot of its earnings from its large corporate investment portfolio and is particularly susceptible to changes in the fair market value (FMV) of those investments. In this quarter, the increase in the FMV of the corporate portfolio was $511 million — much smaller than the $1.3-billion gain the year before.

The other four firms reported strong earnings gains, particularly that of Manulife Financial Corp., which rose by 219.7% from a year earlier. The company said this was mainly because of investment-related gains outside of “core” earnings. Core items are those the firm believes reflect the underlying earnings capacity of the business. Those earnings rose by 18.4% year over year.

A recent study by DBRS Morningstar concluded that asset quality for Great-West Lifeco Inc., iA Financial Corp. Inc., Manulife and Sun Life Financial Inc. had minimal deterioration during the pandemic, reflecting the insurers’ conservative investment policies. For example, the average allocation to government bonds by these companies as of Dec. 31, 2020, was 27% compared with 13% for U.S. lifecos.

All five companies saw large increases in earnings, mainly due to much higher underwriting profits as indicated by the drops in their combined ratios (losses and operating expenses as a percentage of net earned premiums).

Fairfax Financial Holdings Ltd. is the only firm in this sector operating in the U.S., and may have been significantly affected by Hurricane Ida and other recent U.S. storms.

Results were mainly positive. Besides Dundee Corp.’s loss, only AGF had lower earnings than a year earlier.

Dundee primarily invests in resource companies, most of which had losses this quarter. AGF reported a higher increase in expenses than in revenue.

All three of the big independent mutual fund companies had net sales this quarter. IGM Financial Inc. had the largest inflows at $2.5 billion, although that was below $3.6 billion the year before. This quarter is the second in a row for net sales at AGF ($408 million following $385 million) while CI’s inflow ($400 million) was its first in the recent past.

Guardian Capital Group Ltd. had a 65.5% increase in assets under management and its revenue was up by 39.6%, while operating expenses rose by only 32.7%.*

Sprott Inc. is a precious metals specialist, so its earnings tend to be counter-cyclical — it does well in bear markets as investors turn to gold as a safe haven.

TMX Group Ltd. had a solid 14.7% increase in net income. Revenues were up and expenses down.

Earnings were way up for Des­jardins Group’s property and casualty insurance business, to $330 million from $16 million. Net income also increased in personal and business services, but declined in the wealth management and life and health insurance division. 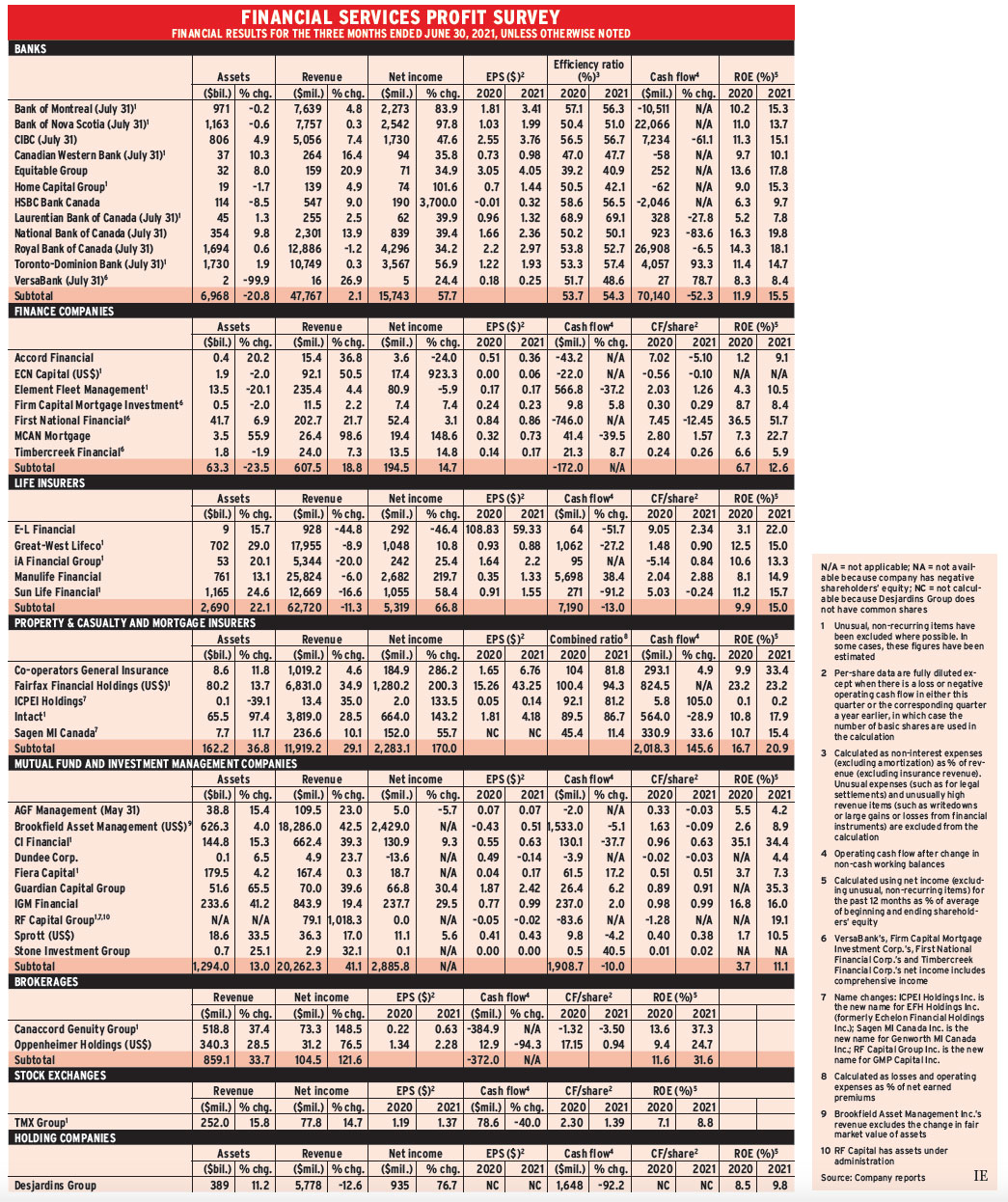 *This paragraph has been corrected. The original version stated that Guardian earns a lot of income from Bank of Montreal dividends, but the company’s holdings have been steadily decreasing, including in this past quarter. Return to the corrected sentence.