As interest in sustainable investing grows and products flood the market to meet demand, some investors may feel like archaeologists excavating fund fact documents for buried truths in a quest to avoid greenwashing.

This is a common problem as investors wait for regulatory standards on environmental, social and governance (ESG) investments. Some organizations are looking to fill the gap with tools to help advisors assess funds.

Last month, the CFA Institute released draft voluntary ESG disclosure standards it hopes fund companies around the world will adopt. The Canadian ETF Association is releasing its own ESG screening tool in July, and the Responsible Investment Association (RIA) is working on a fund certification program.

The CFA Institute’s draft is out for its second consultation. The version released in May differs from the architecture set out in the initial consultation paper. While last summer’s proposal was built around a matrix matching common client needs with six “ESG-related features” of funds (see Table 1 below), the draft standards won’t require investment products to have specific ESG-related features. 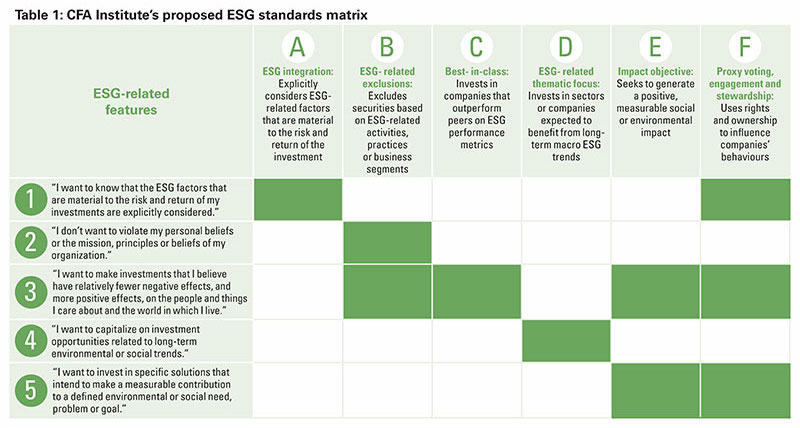 Speaking at the RIA’s virtual conference earlier this month, Chris Fidler, the CFA Institute’s senior director of global industry standards, said the organization “pivoted” with this second draft to avoid conflicting with the dozens of standards, codes and regulations that already exist in different jurisdictions.

The consultations found a lack of agreement on the terminology used in the initial paper, which led the CFA to shift to plainer language. Appendix B of the draft exposures translates the terms from the ESG-related features in the original consultation paper — such as “ESG integration,” “best in class” and “impact objective” — into the draft exposures’ more general language. “ESG integration,” for example, becomes “ESG information in financial analysis or valuation.”

The new draft takes differences between countries into account, Guenther said. A term such as “best in class” in the consultation paper could cause problems. “If you don’t have a global leader in your country, for example, what is your benchmark and how do you compare that?” she said. Impact investing could also look different from country to country.

The CFA’s new draft “actually dovetails with what’s happening in real life,” she said. The disclosures aren’t perfect, “but it gets us closer to where we need to be to make something that’s measurable for our investing public.”

The CFA deliberately avoided establishing a minimum threshold for labelling a product as ESG, impact, responsible or sustainable so as not to conflict with the SFDR or other rules.

“Ours is a standard for the information that should be given to investors,” Fidler said. “There’s other types of standards that would say whether a product is responsible or not, or ethical or not, or sustainable or not, or green or not. But to get to that kind of standard or label, what you need to do is establish requirements. There’s a lot of debate as to what those words mean. In a lot of cases it’s like beauty — it’s in the eye of the beholder.”

While shorthand labels are useful, Fidler said, the CFA draft disclosures only aim to complement such labels. He compared the approach to food labelling: “You can have a label that says ‘organic’ but you still have the ingredients that say what’s in the box.”

The draft disclosures’ list of ESG “ingredients” will come in the form of a three- to five-page document that will save investors from having to parse a 100-page prospectus for that same information, Fidler said.

That’s not as digestible as a colour-coded chart, Nash said, adding that some of the initial consultation paper’s simplicity has been sacrificed. That means the new disclosures may be more useful for advisors than for individual investors trying to make decisions.

“Provided the funds do disclose in this manner, my hope is that, in the literature tab alongside [the] fund fact documents, I could get a CFA ESG disclosure document,” Nash said. “That would make my life so much easier when it comes to comparing these different issues and getting the specific data points I require.”

A particularly challenging area for disclosures is around proxy voting guidelines and engagement strategies, Nash said. The CFA standards could make it much easier to track which companies and funds “are really leaders in these areas versus which ones are just kind of paying lip service and doing the bare minimum.”

Another potential concern, however, is that the CFA won’t require independent verification of the funds’ disclosures.

“Not only is it optional to adopt the standards or use the standards — you have the flexibility to do it on a product-by-product basis and you have the option to get it independently examined. Whether or not investors will want that, we don’t know,” Fidler said.

“If people think it’s important to get this verified, they’ll ask for it. We’ll let the market figure that out.”

With greenwashing so prevalent, Nash said, a laissez-faire approach to verification leaves “a lot of wiggle room.”

The RIA is in the early stages of developing a fund certification framework that will build off the CFA Institute’s standards and help investors and advisors identify investments that meet a minimum threshold of ESG performance.

RIA CEO Dustyn Lanz said he supports the CFA standards and encourages Canadian companies to adopt the framework when it’s finalized. But while the CFA framework stops at standardized ESG information, the RIA would look at labelling, certification and performance thresholds.

Lanz said the association is engaging with asset managers and advisors, with a wider industry consultation to follow. “It’s too early to say exactly what it would look like,” he said, “but credibility is the number one priority.”

While the CFA plans to release final standards in November, the Canadian ETF Association (CETFA) is moving ahead with a screening tool to help advisors evaluate ETFs’ sustainability. The association partnered with Morningstar to build a database of the 1,000-plus Canadian ETFs that will allow advisors to compare products based on Morningstar’s sustainability rating and other criteria.

“I’m hoping it helps demystify some of the products,” said Pat Dunwoody, CETFA’s executive director. With so many new ETFs in the market, she said “it was going to be more and more difficult for advisors to select the appropriate ones for their clients — to do their true due diligence.”

The ETF screener will allow advisors to filter by criteria such as asset manager, category (e.g., Canadian equity) and risk level before comparing sustainability scores.

“We don’t believe we’re going to be the place where advisors make their final decision,” Dunwoody said. “We’re hoping that we are the tool they use to create their final shortlist.”

Latest news In Research and Markets

Unlike stock exchanges, Coinbase's revenues are tied to the assets' value

Ranking the risk to mortgage markets

Australia is most exposed to higher rates, a Fitch report said, while Canada ranked fourth

Ransomware a growing threat to governments

How the investment thesis for crypto has changed