Whether or not a life annuity is right for a retired client depends not only on the client’s financial situation and health, but also on their age. Even when a life annuity would improve the long-term viability of a client’s portfolio, the client should reach a certain age before adding the annuity to the mix.

First, let’s look at some situations where a client generally should not purchase a life annuity. One is if they have a lower life expectancy due to poor health. Another is if they have insufficient personal savings.

For people with a surplus of appreciating assets, a life annuity could still be inappropriate, unless the client wishes to convert fixed-income securities into a life annuity to diversify their portfolio. Low interest rates are not a consideration.

At the other end of the spectrum, people with low incomes may not need to purchase a life annuity because indexed government benefits can often cover their lifestyle needs.

Life annuities are therefore appropriate for clients between these two extremes, but only after having examined other factors. A client whose needs are covered by payments from a well-funded defined-benefit pension plan, for example, might decline the annuity option unless they are risk averse.

Before purchasing an annuity, clients would be better off deferring their old age security (OAS) and Canadian/Quebec Pension Plan benefits until age 70. Both provide a lifetime cushion indexed to the consumer price index, which is uncommon and often expensive. Moreover, these benefits are often less expensive than a life annuity. People with low incomes who are eligible for the Guaranteed Income Supplement (GIS) should not defer their OAS, however, because one can only receive GIS while receiving OAS.

A life annuity might be suited for those whose annual cost of living is more than their current lifetime benefit income (from both public and private sources). In such cases, clients should avoid putting 100% of their savings into an annuity. Lifetime incomes can cover basic needs, and non-locked-in savings can go toward discretionary spending, offering greater flexibility.

If your clients have an aversion toward life annuities, you can assist them in overcoming that concern.

Next we consider the client’s age and the ideal annuity mix for their portfolio. In general, the older the client, the more relevant a life annuity becomes due to the increased benefits of risk pooling.

A principal benefit of a life annuity is its ability to manage longevity risk. The product allows a client to not only draw from their personal savings through regular payments, but also to ensure they don’t run out of money if they live 10, 15 or even 20 years longer than the age of death assumed in their financial plan.

Risk pooling means the premiums paid by people who die younger finance the annuities of those who live well into old age. The latter benefit from the earlier deaths of others, earning what’s known as “mortality credits.” This same principle is used in home insurance: people whose houses burn down “benefit” from the premiums paid by those whose houses remain standing.

Traditional life annuities can mitigate longevity risk, but they require the payment of unnecessary administrative fees once the client starts receiving pension payments. From age 60 to 75, the probability of death is less than 10% for non-smokers and in good health. At those ages, people might be better off managing their own money.

From age 80 onwards, mortality risk increases, and living longer is less certain. Risk pooling thus becomes more relevant because from then on, those fortunate to live longer can benefit from “mortality credits.”

However, Anwar could forgo the annuity and simply live off the returns from his capital (estimating a conservative 3% per year, or $250 per month). Another option could be to spread out his $100,000 capital until age 90, withdrawing $472 per month (also estimating 3% return), which is comparable to the life annuity of $490 per month.

But what happens if Anwar lives to be 95, or the financial markets do not work in his favour? Amortizing his $100,000 to age 95 would mean reducing his monthly withdrawals to $419, which is 16% less than under the annuity option.

According to the Institut québécois de planification financière (IQPF), a 65-year-old man has a 10% chance of living to 97 or older if he is a non-smoker, healthy enough to plan for an annuity and lives a healthy lifestyle.

If Anwar were to play it safe and amortize his capital to age 100, he would have a monthly income of $383. This is 22% less than what the life annuity could provide and would also mean having to manage through the uncertainties of the market.

The IRR of an annuity

In addition to mitigating longevity risk, life annuities can also be beneficial in terms of yield. That said, the returns are unknown because they depend entirely on the annuitant’s lifespan. The internal rate of return (IRR) of an annuity can be negative if the annuitant dies earlier than expected, but that same annuity can be valuable for someone who lives longer.

Let’s say Anwar uses $100,000 to purchase a non-indexed 10-year guaranteed annuity of $490 per month at age 65. By age 82, he will have roughly recouped his starting capital. Returns rise above 0% from that point onward. 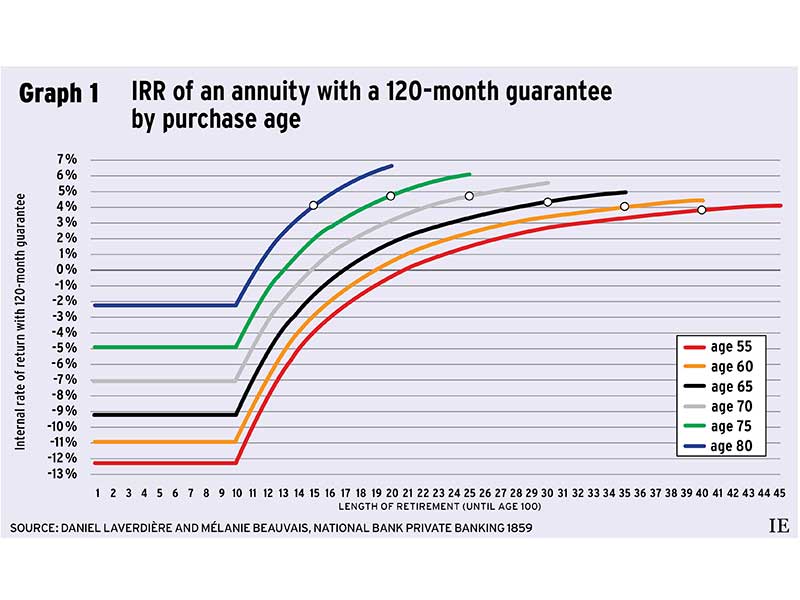 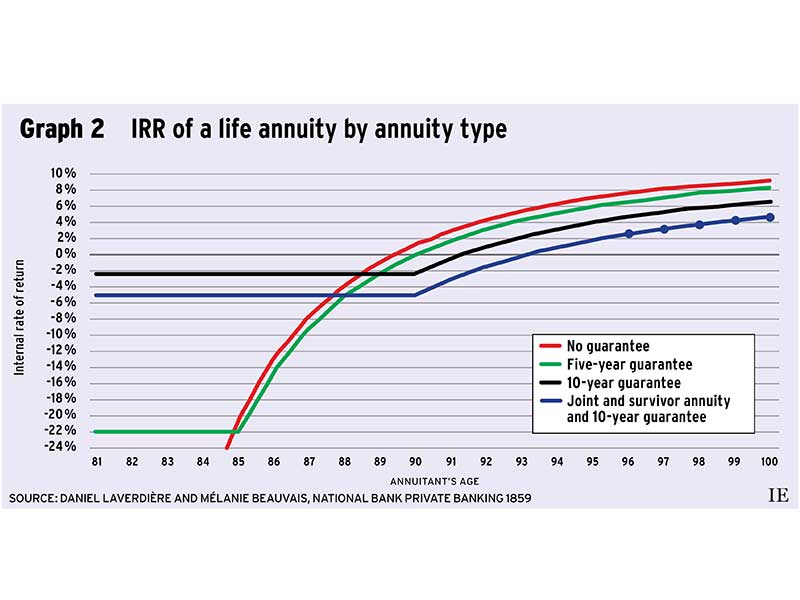 At age 85, with payments continuing at $490 per month, returns rise to 1.7%. This “variable yield” is represented by the black curve in Graph 1. The dot on the curve represents the yield at age 95, which comes in at 4.3% for an annuity purchased at age 65.

According to the IQPF calculator, half of men aged 65 will live to 89, and a quarter will live to 94. These probabilities even take smokers and those in poorer health into account. The life expectancy of those who purchase life annuities, who are often non-smokers and in good health, is therefore higher. A client who dies between 94 and 100 years of age would receive a yield on the initial annuity investment of $100,000 that varies between 4.2% and 4.9% after fees.

These returns compare favourably to Canadian government bonds longer than 10 years, which rose to 2.0% in October. (This is a gross yield, excluding management fees.) A person in good health who is a relatively conservative investor could benefit from the life annuity option.

To create Graph 1, we repeated the exercise by calculating the IRR of a non-indexed life annuity for a man with a $100,000 premium at various ages between 55 and 80. For each scenario, we selected the insurer that offered the best monthly payment, which varied between $398 at age 55 and $739 at age 80. The curves stop once the annuitant reaches 100 years of age.

The worst-case yields that occur following the annuitant’s premature death, regardless of the 120-month guarantee, are more frequent when the annuity was purchased at a younger age. When the annuitant buys their annuity in their 80s, we see mortality credits producing a higher IRR at ages 95–100.

As mentioned above, longevity risk pooling puts the funds from annuitants who die earlier than expected toward those who live longer. Often, the mortality tables used by insurers for their calculations are adjusted for the fact that most people who are interested in life annuities are probably in excellent health. Given that an adjusted table would have more conservative survival estimates, there could be benefits to purchasing an annuity at a more advanced age.

When purchasing an annuity, the client should set aside their fear of a negative IRR and look at their annuity as a kind of long-life insurance policy.

We added the blue dots on the final curve to emphasize the higher likelihood of realizing the IRR due to having a spouse of the same age (longer payment period). In addition, we note that the difference in monthly payments of $251 ($886 compared to $635) also affects the long-term viability of a financial plan.

The advisor should therefore underscore the importance of purchasing a life annuity for its benefits, such as the possibility of benefiting from mortality credits, and encourage the client to set aside fears about leaving money on the table.

In our analysis, we did not examine other options such as indexed life annuities and deferred annuities, for which payments can start at a later age. Nor did we explain why it is generally preferable to purchase an annuity using non-registered capital.

We also did not discuss the potentially beneficial option for certain clients of the advanced life deferred annuity (ALDA). This allows the annuitant to put up to 25% of their registered savings into a life annuity product that can be deferred to as late as Dec. 31 of the year they turn 85. Indirectly, this reduces the mandatory minimum withdrawals of an RRIF. These funds can come from an RRSP, a RRIF, a DPSP, a PRPP (VRSP) or a defined-contribution RPP. A dollar limit of $160,000 in 2022 ($150,000 in 2021) is in place to limit the sum transferred to the ALDA, and this threshold is indexed to inflation.

One thing is certain: the ideal annuity mix in a portfolio depends on the client. Conscientious advisors will be able to help their clients see life annuities as a tool to avoid leaving money on the table if they live well into old age.

Mélanie Beauvais is a principal advisor and Daniel Laverdière is senior manager, both with the Expertise Centre, National Bank Private Banking 1859, in Montreal.

Find out about the latest launches

Housing starts in the province rebounded to 2015 levels in May, finds Statistics Canada

Is now the time for floating-rate loan ETFs?

Identify companies that understand the difference

Statistics Canada says economy grew 0.3% in April, but contracted in May

The surprise contraction may have been due to temporary factors