This article appears in the June 2020 issue of Investment Executive. Subscribe to the print edition, read the digital edition or read the articles online.

Looking only at the headline data for this year’s edition of Investment Executive’s Dealers’ Report Card, the industry appeared to enjoy stellar growth in many of its fundamental metrics — at least until markets were roiled by Covid-19. Based on data collected from February 18 to April 3, 2020, assets under management (AUM) were up dramatically from last year’s research period: average AUM surged to $70.1 million from $48.6 million last year.

This increase in average assets was accompanied by a modest rise in client numbers. The average dealer advisor served 222 households, up from 208 in last year’s Report Card. This expansion likely provided some of the boost in AUM, but given that assets grew at a far faster rate, market gains probably did much of the heavy lifting.

As assets grew sharply over the past year, advisor productivity (as measured by AUM per client household) also grew. Average productivity climbed to slightly more than $380,000 this year from slightly less than $323,000 last year. (While Montreal-based Peak Financial Group and Markham, Ont.-based Worldsource Wealth Management Inc. have not been assigned performance ratings due to insufficient sample sizes, demographic data from those firms has been used.)

This year’s results come with a huge caveat — the global pandemic that emerged in the midst of this year’s survey, causing widespread economic damage and prompting a precipitous drop in global equity markets. So, while the average advisor in the survey reported strong growth, the facts on the ground have changed significantly in the weeks since the research began.

In fact, the average AUM reported in data collected in February — when the Covid-19 outbreak had been detected but hadn’t yet turned into a full-blown pandemic — was about double the average assets reported in March and April. 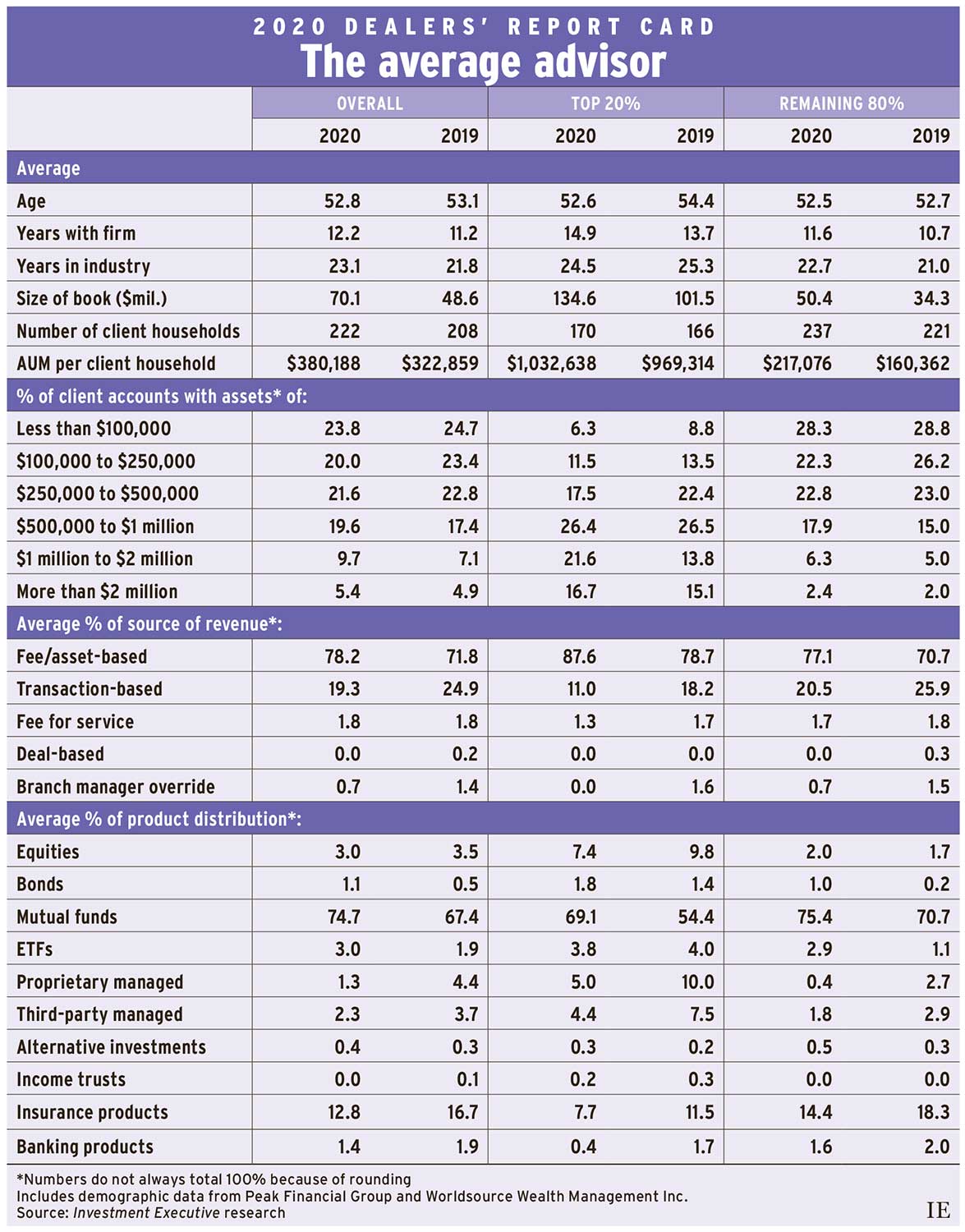 Looking solely at data from February (about 40% of the sample), average AUM reported in the early days of our research was $99.0 million. Conversely, data collected in March and April showed average assets of just $48.9 million — less than half the February reading, and in line with the level reported in last year’s Report Card.

Yet, the data from the later surveys provide insight into the likely effects of the exceptional market volatility that emerged in March — between Feb. 20 and March 23, the S&P/TSX composite index was down almost 40% — on advisors’ businesses.

Alongside the stark differences in average asset readings between the early and later parts of the survey, reported advisor productivity numbers also were poles apart. Data from February alone pointed to average AUM per client household of well over $500,000. Meanwhile, the data collected in March and April showed average productivity at slightly more than $277,000 — which would represent a decline from the average reported in 2019 (again, these populations aren’t directly comparable).

Accounts worth less than $100,000 remained the single largest component of the average book, with a 23.8% share, but this was down a bit from 24.7% in last year’s Report Card. In fact, market shares for every account category under the $500,000 mark declined year-over-year, and shares for accounts in excess of $500,000 rose.

However, the picture is much different for data collected in February vs March and April. In February, advisors reported that 40.9% of their accounts were worth at least $500,000, and 20.4% were larger than $1 million. Conversely, in March and April, advisors reported that just 27.8% of their book was devoted to accounts above the $500,000 mark, and just 9.3% to $1 million-plus accounts.

Putting aside the differences between the pre- and mid-pandemic segments of our sample, the overall trend in this year’s data is growth. That’s evident both in the headline numbers and when dividing the overall advisor population into the top 20% (as measured by AUM per client household) and the other 80% of the industry.

For the rest of the industry, asset growth was just as robust, albeit from a much lower starting point. Among the other 80% of advisors, average AUM rose to $50.4 million in this year’s Report Card, from $34.3 million last year.

Client rosters expanded significantly for the other 80% of advisors, with the average book size increasing to 237 households this year from 221 last year. But, even with the growth in client numbers, the average advisor in this segment managed strong productivity growth. Average AUM per client household among the other 80% rose to more than $217,000 this year from slightly more than $160,000 in 2019.

The account distribution data also demonstrate the underlying industry growth trends. For the top performers, accounts worth more than $1 million gained share of the average advisor’s book; for the rest of the industry, the inflection point was down at the $500,000 level.

Among the top 20% of advisors, the share of book devoted to accounts worth at least $1 million jumped to 38.3% this year from 28.9% in last year’s Report Card. There was a particularly large jump in the $1-million to $2-million category, which saw its share of the average top performer’s book rise to 21.6% this year from 13.8% last year.

The rest of the industry also enjoyed growth in its share of larger accounts, even as sub-$100,000 accounts remained their single largest allocation, at 28.3%. At the higher end of the account distribution scale, this segment of the advisor population also gained share.

Alongside this overall trend to higher assets, a greater proportion of high net-worth clients and superior productivity, advisors’ compensation was on the rise. The proportion of advisors in the overall Report Card who reported earning less than $100,000 declined to 14.3% this year from 19.9% last year.

This general trend toward higher compensation reflects the growth advisors were generating in their books over the past year, and indicates they at least entered this crisis from a position of strength. The economic fallout from the Covid-19 outbreak will affect advisors’ bottom lines, but the robust growth trends that were evident heading into the crisis should cushion the blow.

Dealers try to deliver on tech

Supporting advisors through a pandemic

The legal team gets $20 million, and a former advisor turned plaintiff was awarded $50,000

An Ontario court will rule shortly on motions regarding investor representation