This article appears in the April 2021 issue of Investment Executive. Subscribe to the print edition, read the digital edition or read the articles online.

By the end of 2020, most financial services companies had higher earnings than before Covid-19 hit. In fact, quarterly net income for many of the 43 firms in Investment Executive’s (IE) Profit Survey was higher than it’s ever been.

Banks had to massively increase their loan-loss provisions from February to July 2020, but the quick recovery of financial markets kept earnings rising for most of the year. Most of the finance companies, as well as the insurers, investment firms and brokerages, also enjoyed strong earnings in the final quarter of 2020.

Thirty-three companies saw their quarterly earnings rise year over year, and four reported positive net income compared with a loss in the same quarter of 2019. Only four firms reported lower net income year over year and just two were in a loss position: ECN Capital Corp. and Timbercreek Financial Corp.

Four companies felt optimistic enough to raise quarterly dividends: ECN Capital Corp.’s to US3¢ from US2.5¢; Brookfield Asset Management Inc.’s to US13¢ from US12¢; Guardian Capital Group Ltd.’s to 18¢ from 16¢; and Canaccord Genuity Group Inc.’s to 6.5¢ from 5.5¢.

Genworth MI Canada Inc. had been doing business under the Sagen brand since October 2020, and officially changed its name to Sagen MI Canada Inc. on Feb. 5. (Sagen MI went private on April 1, when Brookfield Business Partners LP acquired all the Sagen shares it did not already own.)

EFH Holdings Inc. is the new name for Echelon Financial Holdings Ltd. EFH sold its P&C operations except for those in Prince Edward Island. Now a smaller company, ECN was delisted from the Toronto Stock Exchange and listed on the TSX Venture Exchange on Dec. 23, 2020 under the new name.

RF Capital Group Inc. is the new name for GMP Capital Inc. as of Nov. 23, 2020. GMP sold off its capital markets operations in 2019 and in October 2020 acquired the shares of Richardson GMP that it didn’t already own. RF Capital’s business now focuses primarily on wealth management through the rebranded Richardson Wealth brokerage. It also offers carrying broker services.

On Feb. 13, Power Financial Corp. folded into Power Corp. of Canada. The financial results of Great-West Lifeco Inc. (GWL) and IGM Financial Inc. will now be consolidated in Power Corp.’s, which is not a financial services company and thus will not be included in IE’s profit survey.

HSBC Bank Canada was the only deposit-taking institution with a decline in net income in the quarter, a drop of 20.4% from a year earlier. Revenue was down by 10.2% while expenses were up by 9.5%.

The banks are “well positioned to weather any further adverse impacts related to the pandemic as capital and liquidity measures remained robust and well above regulatory requirements,” said Robert Colangelo, senior vice-president for Canadian banking at rating agency DBRS Morningstar Inc. in Toronto.

ECN and Timbercreek reported losses. ECN had a $13-million impairment charge related to a legacy corporate investment, while Timbercreek wrote down the fair market value of its assets by $15.5 million, mainly relating to a retail asset impacted by Covid.

Nevertheless, ECN is optimistic (witness the increase in its dividend). CEO Steven Hudson stated in his fourth-quarter release that although 2020 was a difficult year, “we remain confident that our growth will continue.”

Life insurers had a record quarter for net income, with all five companies reporting increased earnings.

iA Financial Corp. Inc. and Sun Life Financial Inc. each gained around 7%. iA had additional costs in the quarter due to pandemic support for employees.

This was another strong sector, with all five companies reporting better results than a year earlier.

All firms had increased underwriting profits as indicated by lower combined ratios (incurred losses and operating expenses as a percentage of earned premiums). The improvement in insurance operations was substantial except in the case of Fairfax Financial Holdings Ltd. Still, Fairfax experienced large increases in the fair market value of investments: US$1.2 billion compared with US$640 million a year earlier.

IGM Financial had net sales of $2.2 billion, mainly thanks to big sales at subsidiary Mackenzie Financial Corp. AGF finally had net sales, which reached $88 million. CI remains in large net redemptions to the tune of $2.1 billion.

Fiera had a $66.9-million impairment of intangible assets that was only partially offset by other gains, including $48.8 million for accretion and change in the fair market value of purchase-price obligations.

Dundee primarily manages its investments, mainly in resources companies. The company had a gain in the fair value of investments of $2.5 million in this quarter versus a loss of $16.4 million a year earlier.

Guardian’s net income was the result of a big increase in the fair market value of its investments, which includes large holdings of BMO shares.

Sprott, a precious metal specialist, benefited from the strong interest in gold during the pandemic and the resulting increase in gold-related stocks.

TMX Group Ltd.’s 53.7% earnings gain was mainly because net income in Q4 2019 was pulled down by an $18-million impairment charge related to subsidiary Shorcan Brokers Ltd.

Desjardins Group reported a 39.9% earnings gain. Declines in personal and business services, wealth management, and life and health insurance were more than offset by the increase in P&C income. 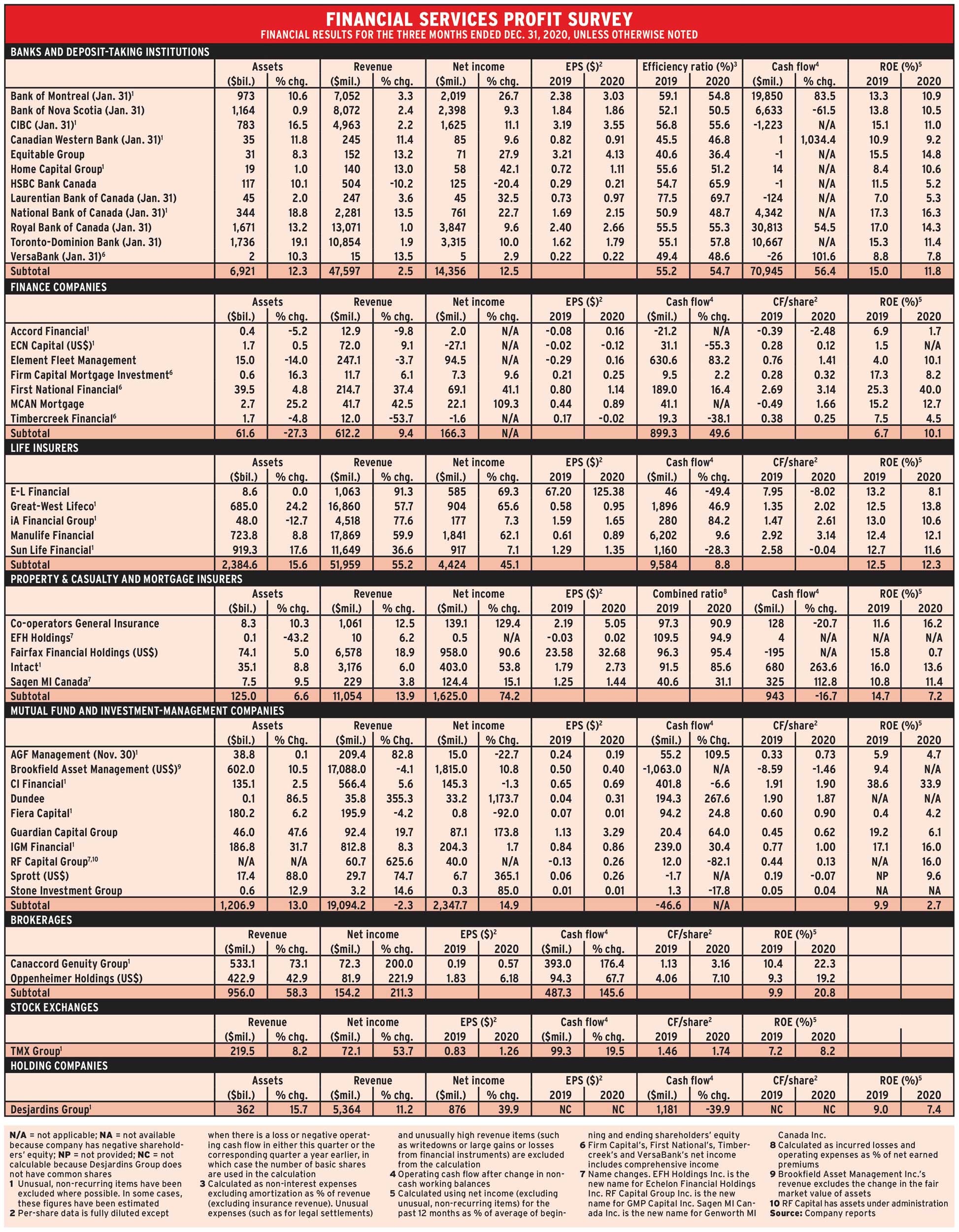