Almost two-thirds of financial services firms reported higher earnings in their most recent fiscal quarter for which data are available vs the corresponding quarter a year earlier, reflecting continued healthy growth in Canada’s economy.

Canada’s economic growth is expected to be somewhat slower this year. (See Uncertainty reigns.) That probably will be reflected in lower increases in financial services firms’ earnings in 2019, but they should not be dramatic.

Of the 43 companies in Investment Executive’s quarterly profit survey, 28 reported higher earnings and three reported positive net income vs a loss in the corresponding quarter in 2017. Of the remaining firms, nine reported lower net income and three were in a loss position. On average, the companies had an 11.7% increase in net income. (These figures exclude Great-West Lifeco Inc. [GWL] and IGM Financial Inc., as the results of both are consolidated in those of Power Financial Corp.) 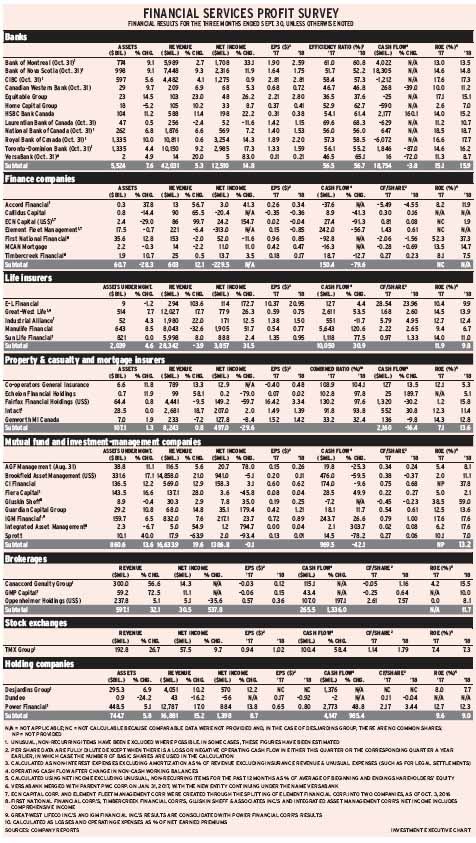 Seven companies increased their quarterly dividends, while two made cuts.

A news release from Element explains that the dividend’s reduction is needed to “fund the $150-million investment our value-creating transformation requires” and that the transformation will “bring our leaders closer to our customers, facilitate faster decision-making and foster greater collaboration and information sharing.”

Meanwhile, MCAN’s 2018 financial report states the decline in the dividend “reflects the expected impact from the company’s shift to a more conservative asset mix, the slower than expected growth in our single family business to date and the related impact on our net interest income.”

– BANKS. Laurentian was the only bank to report lower net income in the quarter ended Oct. 31, 2018, vs the corresponding period in 2017. This drop was a result of lower revenue and higher provisions for loan losses – and not cause for concern.

The banks are in good shape. A recent news release from Toronto-based DBRS Ltd. states that the credit-rating agency anticipates “continued robust earnings power for the large Canadian banks” in 2019, assuming that the global economic outlook “remains favourable.” The report notes that the banks “should benefit from a rising interest rate environment.”

The other 11 banks also reported increases in their loan-loss provisions, except for BMO and HSBC Bank Canada. In total, provisions were $285 million higher, at $2.2 billion vs $1.9 billion. This is not alarming, particularly as they dropped from $2.4 billion in the previous quarter.

Among the smaller banks, even Home Capital Group Inc. reported increased earnings. The company had had a liquidity crisis after it revealed in 2016 that there were problems regarding income verification of mortgages by outside brokers. U.S. investment star Warren Buffett came to the rescue, providing capital in exchange for shares in the firm – most of which he sold back to the company through its recent share buyback.

Home Capital appears to be on an even keel now, but its net income is less than half of what it was prior to mid-2016. A DBRS report states the credit-rating agency will monitor Home Capital to see if it continues to “show progress and focus its efforts on strategically deploying capital and liquidity to regain lost business and rebuild the franchise.”

There had been concerns that Canadian Western Bank might have problems after oil prices plunged in 2015, given that much of its business is in Alberta. However, the bank has come through with flying colours and has raised its quarterly dividend five times since 2014.

– LIFE INSURERS. All five life insurance companies (lifecos) reported higher earnings, including GWL. The biggest increase was E-L Financial Corp. Inc.‘s 172.7%, and that outperformance was due to a business model that’s different from the other lifecos.

Because insurance is the main business of most of the lifecos, their investments are used primarily to back up their long-term insurance liabilities. However, E-L has investments in addition to those for its insurance operations, which go through subsidiary Empire Life Insurance Co.

Echelon is a small company that has struggled. It announced on Nov. 9 that it’s selling its main operating subsidiary, Echelon Insurance, to CAA Club Group.

Fairfax, which is a huge company, is as much an active investor – taking large positions in many companies – as it is an insurer. Therefore, investment income often determines earnings. The firm had only US$41.2 million in investment income in the quarter ended Sept. 30, 2018, vs US$1.1 billion a year earlier.

Brookfield’s decline in net income was only 5.1%. Fiera’s 45.8% drop appears large, but is a result of its rapid growth through acquisition and not an indication of problems.

Sprott’s 93.4% decline is not alarming, as the company is changing its business model to focus on its core competency in precious metals and other resources. This change involved selling its diversified asset-management contracts and some of its private-client accounts, thereby making the firm more dependent on resources prices. Sprott’s quarterly report states that there was significant pressure on precious metals prices in the quarter ended Sept. 30, 2018, but added that the firm anticipates “stronger prices throughout the remainder of 2018 and into next year.”

Although earnings rose at AGF Management Ltd., CI Financial Corp. and IGM, all reported net redemptions in the quarter.

– BROKERAGES. Canaccord Genuity Group Inc. and GMP Capital Inc. both reported positive net income vs a loss a year earlier, but Oppenheimer Holdings Inc., which operates solely in the U.S., reported a drop in net income.

– HOLDING COMPANIES. Desjardins Group and Power Financial reported higher net income vs a year earlier while Dundee Corp. was in a loss position. Dundee has a portfolio of investments, mainly in resources, which have been struggling.

Preparing for a second wave

Both targeted testing and isolation could combat a second wave

Globally, investors are expecting an average return of 10.9% over the next five years

Kenmar calls on CSA to adopt DSC ban next March