Financial services companies have come through the pandemic relatively unscathed, with many reporting higher net income than a year earlier.

Of the 42 companies analyzed by Investment Executive, 22 had earnings gains and three reported positive net income versus a loss a year earlier. Only 15 firms had lower earnings and just two reported a loss. (These figures are for quarters ending Aug. 31, Sept. 30 and Oct. 31, 2020, and exclude Great West Lifeco [GWL] and IGM Financial Inc., whose results are consolidated with Power Financial Corp.’s.)

Only three firms raised their quarterly dividends. Element Fleet Management Corp. upped its dividend to 6.5¢ from 4.5¢, First National Financial Corp. raised its to 52.50¢ from 48.75¢ and Sprott Inc.’s went to US25¢ from US23¢. First National also paid a special dividend of 50¢.

Most sub-sectors reported higher earnings, except the banks and the mutual fund and investment companies, but the banks were only down an average of 5.5%.

Net income dropped 52.9% for the mutual fund and investment companies collectively, but only because Brookfield Asset Management Inc.’s (BAM)earnings fell to US$542 million from US$1.8 billion the year before. Net income increased for six of the other eight firms.

Banks. The sector has been impacted by both the need for higher loan-loss provisions and low interest rates, which decrease loan profitability.

Four of the 12 deposit-taking institutions had higher earnings. Housing-focused banks saw big gains: earnings for Equitable Group Inc.and Home Capital Group Inc. were up 34.6% and 49.9% from a year earlier, respectively.

Bank of Montreal and Royal Bank of Canada also had higher net income, but gained less than 3%. Both had lower net income in personal and commercial banking, and profits fell in RBC’s wealth management operations.

The 12 firms had a combined $11.7 billion in loan-loss provisions as Covid hit and $7 billion the following quarter. Only $3.3 billion was needed in the latest quarter — not much higher than the $2.9 billion of a year earlier.

Finance companies. Of the four companies with increased earnings, only ECN Capital and First National raised their dividends. The other two with gains were MCAN Mortgage Corp. and Timbercreek Financial Corp.

The firms with earnings declines were Accord Financial Corp., Element Fleet Management and Firm Capital Mortgage Investment Corp. The reasons were largely Covid-related. For example, Accord buys other companies’ debts at a discount and collects the money owed, which was difficult during Covid. Firm Capital is involved in short-term real estate loans and other debts related to real estate.

Property and casualty insurers. Fairfax Financial Holdings Ltd., the biggest company in this sector, reported a 43.8% drop in net income, mainly due to taxes payable of US$37.7 million this quarter versus a rebate in 3Q 2019.

Tiny Echelon Holdings Inc. remained in the red to the tune of $2.8 million versus $637,000 a year earlier.The other three insurers had strong increases in net income. Co-operators General Insurance Co. reported a profit gain of 1,125% due to $77.9 million in underwriting profits versus a loss a year earlier.

Mutual fund and investment management companies. BAM’s big earnings drop was mainly because of lower equity-accounted income and a US$31-million drop in the fair value of assets versus a gain of US$394 million a year earlier.

Five of the other seven companies in the sector reported increased earnings. Dundee Corp. and Fiera Capital Corp. posted positive net income versus a loss in 3Q 2019. 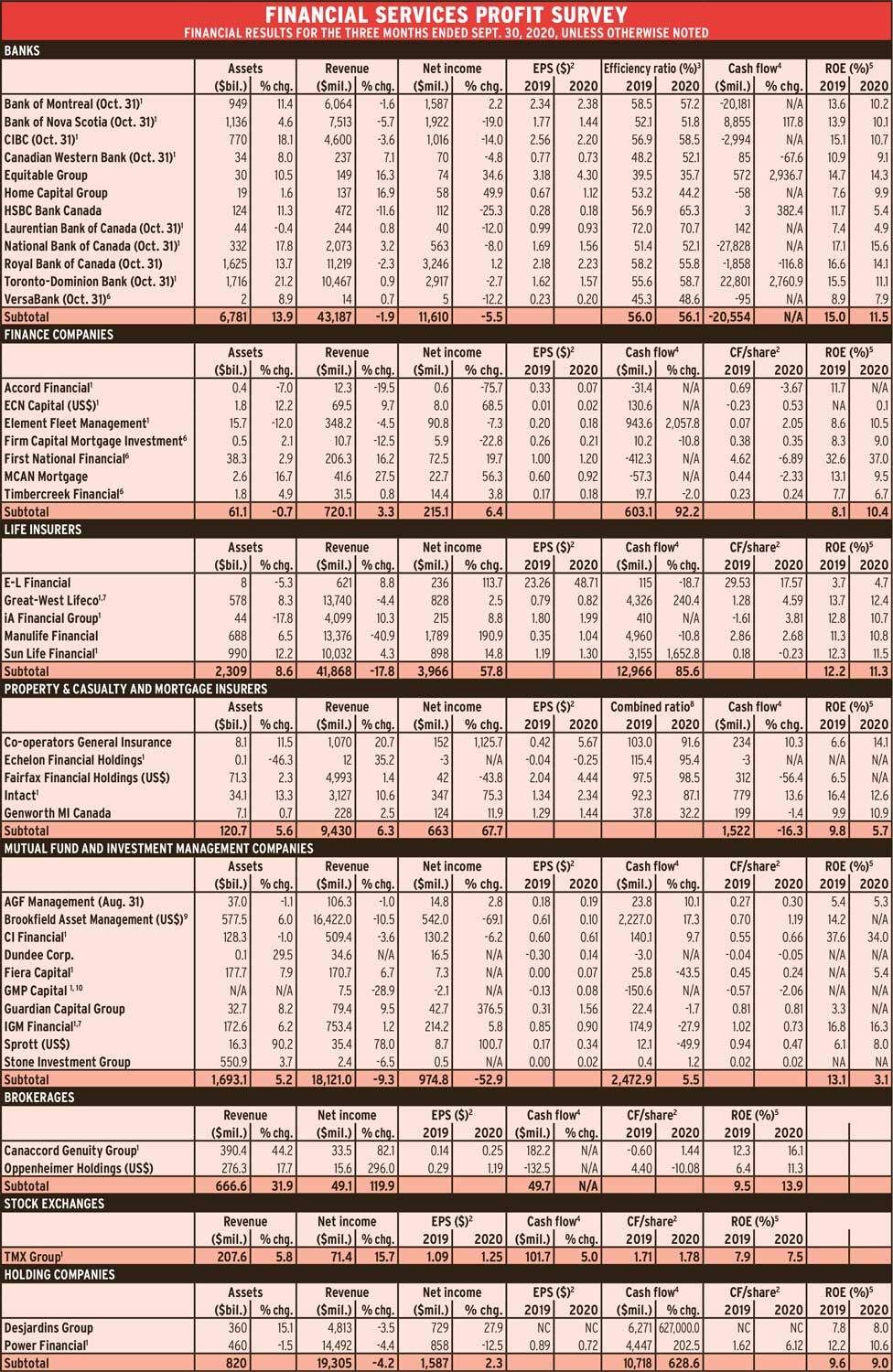 N/A = not applicable; NA = not available because company has negative shareholders’ equity; NC = not calculable because Desjardins Group does not have common shares

Industry is pushing back against the private member’s bill

What the government intends to do with the proposals remains unclear

Proposals include prohibitions on misleading statements

Government measures more than made up for lost income