This article appears in the June 2020 issue of Investment Executive. Subscribe to the print edition, read the digital edition or read the articles online.

After coping with unprecedented market uncertainty since mid-March, one thing the financial services industry can count on in the months ahead is a surge in client complaints.

The last time financial markets were upended so comprehensively — the global financial crisis of 2008–09 — complaints to both self-regulatory organizations and the Ombudsman for Banking Services and Investments (OBSI), the industry dispute-resolution service, jumped sharply once markets began to recover. Current market turmoil is likely to produce a similar increase.

Any time volatility rises and asset prices fall significantly, client complaints naturally climb. In some cases, this reflects a need to assign blame for significant market losses; in others, plunging markets expose failures of advice. 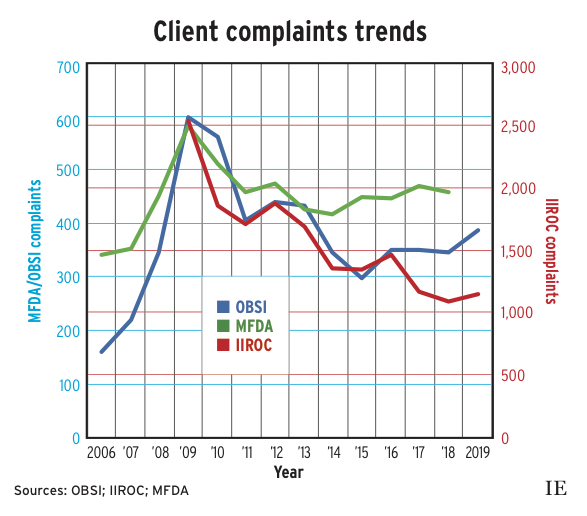 For example, clients who considered their portfolio holdings to be “safe” may discover that their risk tolerance wasn’t properly calibrated in the first place and that their overall portfolio wasn’t suitable.

Financial services firms aren’t responsible for clients’ market losses. Firms generally have to pay compensation only in cases in which the company fails to meet industry standards, provides bad advice to clients or engages in misconduct that results in client losses.

During the Covid-19 financial crisis, securities regulators have provided the industry with emergency relief from certain requirements, such as relaxing supervisory and audit trail expectations in light of the required shift to remote working arrangements. However, this relief may open the door to abuses that could generate investor complaints down the line.

At the same time, the move to remote working is exposing the industry, and its clients, to greater cyber-related risks because financial advisors who work from home are using network setups that potentially are not as secure as their office networks.

Several regulators have reported an increase in phishing attacks since the pandemic took hold and lockdowns were imposed. The Investment Industry Regulatory Organization of Canada (IIROC) also warns that hackers are ramping up their efforts to penetrate remote access networks in order to carry out cyberattacks.

Regulators and law enforcement agencies are seeing other types of fraud on the rise as scammers seek to take advantage of the unusual conditions created by the pandemic. These scams include pump-and-dump schemes involving companies that claim to have developed vaccines or treatments for Covid-19 or that promise extravagant profits from the exploding demand for certain types of medical equipment.

At the same time, the unprecedented economic damage created by Covid-19 — particularly the spike in unemployment and the surge in lost income — creates an audience more receptive to investment frauds. Clients desperate to recoup losses may be more vulnerable to dubious investment schemes.

Whether clients are victimized by cybercrime or more old-fashioned scams, greater incidences of fraud could be an additional source of complaints against firms if investment dealers and advisors don’t guard against these schemes on behalf of clients — or, even worse, if they get sucked into them too.

Just how significantly complaints volumes will rise in the months ahead is difficult to project, but past episodes of major market turmoil indicate that the increase is likely to be significant.

For example, the Mutual Fund Dealers Association of Canada reported that complaints volumes surged in both 2008 and 2009 (by almost 30% a year) before easing in 2010.

OBSI recorded an even sharper increase in complaint activity following the global financial crisis. Investment complaints to OBSI surged by almost 60% in 2008 and jumped again by more than 70% the following year.

IIROC’s first full year of operation was 2009. The regulator reported receiving more than 2,500 complaints that year — by far its highest annual total to date. Complaints activity slipped below 1,900 the following year and has generally trended downward since. In 2019, IIROC fielded fewer than half the number of complaints (1,148) than it received in its first year.

Throughout the industry, complaints volumes have generally been in decline in the years since the 2008–09 global financial crisis as markets recovered and reached new highs.

Now, that trend appears set to reverse and industry firms’ capacity to handle rising complaints volumes may be limited, given the disruption to ordinary work arrangements following the imposition of physical distancing requirements.

Nonetheless, regulators have warned industry firms to keep up with their complaint-handling
responsibilities.

In a notice to the industry, the Autorité des marchés financiers is calling on firms to ensure that complaints are addressed expeditiously despite the challenges posed by the pandemic. The regulator also suggests firms consider whether aggrieved clients are facing financial stresses due to the crisis, with an eye to mitigating the effects on vulnerable customers.

Complaints that firms can’t resolve on their own often end up with OBSI, which recently received a vote of confidence from the Canadian Securities Administrators (CSA). In May, the CSA stated it “is renewing its focus on strengthening OBSI as an independent dispute-
resolution service.”

Whether that results in the CSA finally providing OBSI with some sort of binding authority — which investor advocates have long sought, and as an independent review of OBSI recommended — remains to be seen.

In the meantime, the anticipated rise in complaints volume will inevitably increase the compensation that firms pay to clients.

The proportion of investment complaints to OBSI that are resolved in favour of clients has hovered around the 40% mark, regardless of client complaints volume (although the percentage did jump to a high of 47% in 2019).

Assuming that client success rates remain historically consistent in the months ahead, the number of compensation recommendations is likely to rise proportionally

The future for fixed income