Financial services firms are feeling the impact of market turmoil and slowing global economic growth. In the quarter ended between May 31 and July 31, fewer than half the companies in Investment Executive‘s quarterly profit survey reported stronger earnings than in the corresponding quarter a year earlier.

Nineteen of the 42 firms reported higher earnings, and the only other improvement was Co-operators General Insurance Co.’s report of positive net income vs a loss in the corresponding period a year earlier. Seventeen companies reported lower earnings and five reported losses. (These figures exclude Great-West Lifeco Inc. [GWL] and IGM Financial Inc., as the results of both are consolidated in Power Financial Corp.’s).

Mutual fund and investment-management companies, with their sensitivity to financial markets, struggled the most, with six drops in net income. Tiny Stone Investment Group Ltd. reported a loss.

There also were eight increases in quarterly dividends: six by banks and two by brokerages.

Equitable Group and Toronto-Dominion Bank have had the biggest cumulative dividend increases over the past six years, at 106.3% and 72.1¢, respectively.

The question is whether the banks can continue this run of dividend hikes. There are near-term challenges arising from slowing global growth, declining interest rates and potentially lower business-loan volume, given that there are no signs that the U.S./China trade war will end soon.

Among the brokerages, Canaccord Genuity Group Inc. raised its dividend to 5¢ from 1¢ and Oppenheimer Holdings Inc. increased its to 12¢ from 11¢. Canaccord’s is now back to the level it was in 2015. (The brokerage suspended the dividend in late 2015 and reinstated it at only 1¢ in mid-2017.) Oppenheimer’s dividend held steady at 11¢ through the past six years. Meanwhile, GMP Capital Inc.’s dividend is currently 2.5¢; like Canaccord’s, GMP’s 5¢ dividend was suspended in late 2015, but the 2.5¢ payout wasn’t introduced until late 2018.

The only deposit-taking institutions with declines in net income were HSBC Bank Canada, Laurentian Bank of Canada and National Bank of Canada.

Both HSBC and Laurentian reported decreases in revenue, mainly due to financial market turmoil. National Bank’s net income was pulled down by several one-time items, including impairment charges and a provision for what it calls “onerous” contracts.

Among the smaller banks, Canadian Western continues to do well. It has a significant amount of business in British Columbia, which offsets weakness in Alberta.

Home Capital Group Inc. appears to have fully recovered from its 2016 liquidity crisis, but earnings are much lower than in the past, due to increases in expenses to bolster its operating systems. More expenditures will be needed, including the cost of putting in a core banking system. The company’s quarterly dividend remains suspended.

The declines for most of the others isn’t worrisome, with the exception of Callidus. This alternative finance provider has been in a loss position since Q4 2016, with those losses totalling more than $500 million. That means Callidus’ shareholders’ equity is in a deficit position now. The company’s Q2 2019 financial report says that the firm “expects to secure future growth capital through asset sales and attracting incremental capital,” but adds that “there is no certainty it will succeed in this regard.”

Revenue generally was significantly higher year-over-year, thanks to gains in the fair market value of assets held to back up long-term insurance liabilities. The exception is GWL, which reported a 74.1% drop in revenue as a result of the sale of its U.S. individual life and annuity businesses. The company took a loss on that sale, but it was a one-time unusual item and is excluded from GWL’s results in the table.

Improvements include Co-operators’ return to positive net income vs a loss a year earlier, when the insurer reported a large underwriting loss. Fairfax Financial Holdings Ltd. reported a huge earnings gain, thanks to big increases in the fair value of assets, while Intact Financial Corp. continued its steady performance.

Genworth MI’s net income was down by 5.2% and Echelon Financial Holdings Inc. reported a loss. Echelon sold its main insurance operating subsidiary and its warranty business in May.

Not surprising, AGF and CI experienced net redemptions during the quarter, to the tune of $498 million and $2.5 billion, respectively. IGM, the other big independent mutual fund company, had net redemptions of $544 million.

Fiera is a different cup of tea. It continues to grow by acquisition, such as through its July purchase of IAM. Integrating these purchases and realizing their full net income benefits takes time.

Brookfield is by far the largest company in this sector. Its results are heavily influenced by changes in the fair value of the power, real estate and infrastructure assets it owns as well as in its private-equity holdings. In this quarter, the fair value of these assets declined by $1.4 billion. A year earlier, there was an $833-million increase in fair value.

While Canaccord and Oppenheimer reported 30%-plus increases in net income, GMP was in a loss position, as it was in the previous two quarters.

GMP is transforming. It sold its U.S. institutional fixed- income business in January 2019 and shareholders voted in August to approve the sale of what the company calls “substantially all” of its capital-markets business to Stifel Financial Corp., and shareholders expect to receive a special dividend of 27.5¢ from the proceeds. This transaction will leave the company with its existing 33% ownership of wealth-management firm Richardson GMP Ltd. GMP is negotiating to acquire 100% ownership of Richardson.

TMX reported a 28.7% increase in net income as its expenses fell while revenue remained relatively unchanged.

Dundee invests mainly in resources companies, taking substantial ownership positions. Dundee’s share of losses in these companies is included in its income statement. That share amounted to $2.8 million in this quarter, much lower than the $38.6 million loss a year earlier — but still a loss. 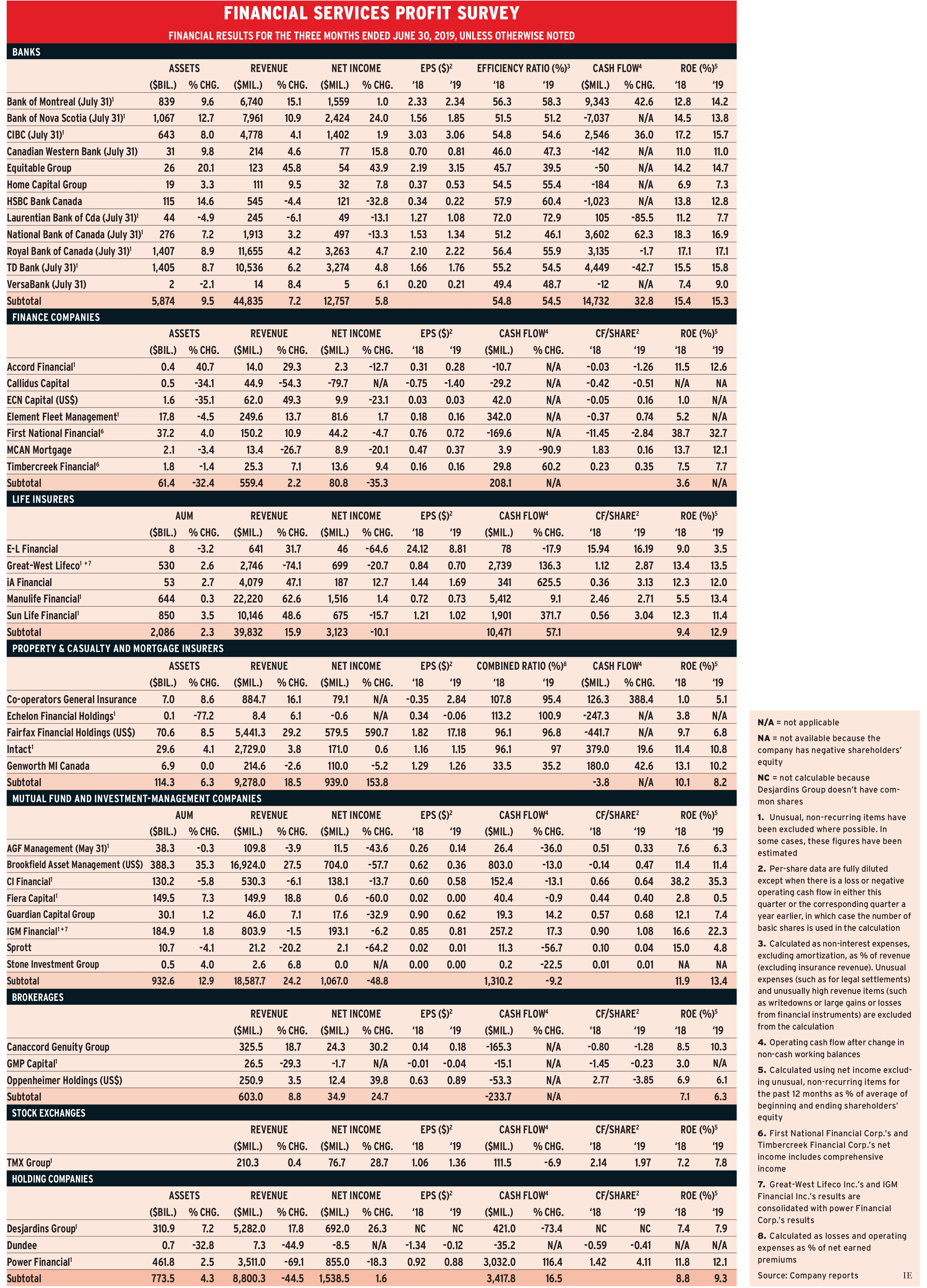 OBSI under the microscope, again

Little action has been taken since previous review in 2016

Amid “lightning fast” industry transformation, Laura Paglia looks to deal with issues such as technology, regulation and ESG