Barely half the companies in Investment Executive’s profit survey of financial services companies reported improved earnings in the early months of 2019. Most of those were banks, finance companies and life insurers.

Except for Guardian, seven of the other nine mutual fund and investment-management firms reported decreases in net income (including IGM), while Fiera Capital Corp. reported a loss vs positive net income in the corresponding period the year before and tiny Stone Investment Group Ltd. remained in a loss position.

The earnings gains for the banks weren’t very strong either. The sector as a whole reported an increase of only 3.7%; the only double-digit gain was tiny VersaBank’s 15%.

Nevertheless, the banks continued to increase quarterly dividends. This quarter featured Bank of Montreal (BMO) raising its dividend to $1.03 from $1; Equitable Group Inc.’s rose to 31¢ from 30¢; Laurentian Bank of Canada’s edged upward to 66¢ from 65¢; and National Bank of Canada’s rose to 68¢ from 65¢.

But that doesn’t mean other banks are taking a pause. All of the 10 deposit-taking institutions that pay dividends have been increasing theirs frequently in recent years — some do so every second quarter. Dividend increases in this sector over the past five years include raises of: 82.4% by Equitable; 57.4% by Toronto-Dominion Bank; 43.7% by Royal Bank of Canada; 41.7% by National Bank of Canada; 40% by Canadian Imperial Bank of Commerce; 35.9% by Bank of Nova Scotia; 35% by Canadian Western Bank; 32.1% by BMO; and 26.9% by Laurentian Bank of Canada.

Other dividend increases declared in this quarter included those of iA Financial Corp. (iA) — formerly Industrial Alliance Insurance and Financial Services Inc. — to 45¢ from 41.5¢; and Sun Life Financial Inc., to 52.5¢ from 50¢. Canaccord Genuity Group Inc. declared a special dividend of 16¢ on top of its regular 1¢ quarterly dividend.

The acquisition front has been relatively quiet. Scotiabank closed acquisitions in Peru and the Dominican Republic and reported a big gain on an accompanying divestiture in the latter country in the quarter. Fiera is picking up Integrated Asset Management Inc. and the asset-management business of Foresters Life Insurance Co. in deals that are expected to close within the next few months.

Home Capital has recovered from its 2016 liquidity crisis, but its expenses rose in the quarter as the company enhanced its operational systems — and still more technological improvements are planned. Both HSBC and Laurentian were affected by internal matters that raised costs temporarily.

Toronto-based credit-rating agency DBRS Ltd. expects the big banks’ earnings growth will remain moderate this year, reflecting slower economic growth. A key indicator is loan-loss provisions, which rose to a combined $2.5 billion for the group from $1.9 billion year-over-year but dropped from $2.7 billion in the previous quarter.

MCAN, First National and Timbercreek are real estate lenders. Accord has long been a factoring firm, buying other companies’ accounts receivable, but now is broadening into a commercial finance company. ECN provides originations and services to financial services firms and Element provides financing for commercial vehicle fleets. (These last two firms were created when Element Financial Corp. was split into two companies; establishing their business models has taken a few years.) Callidus is an alternative lender, providing financing to companies that can’t get loans elsewhere; it’s been in a loss position since the end of 2016.

In this sector, revenue is very volatile because it includes changes in the fair value of the high asset levels required to back up long-term liabilities. However, these changes in revenue are mostly offset on the expenses side by similar changes in long-term liabilities, so net income is not as volatile. The exception is for E-L: because it has a large separate corporate investment portfolio, increases and decreases in the fair market value of those investments are reflected more directly in net income.

These results don’t directly reflect the firms’ underwriting. Co-operators’ and Intact’s underwriting losses were more than offset by increases in the fair value of those firms’ assets.

Fairfax is less reliant on underwriting than its peers because its main focus is on managing its investments, which includes large equity stakes in non-insurance firms and bets on the direction of markets through the use of derivatives. In this quarter, Fairfax’s investments lost value, hence the decline in net income.

Echelon is selling off non-profitable lines of business and expects to return to profitability when that program is completed.

Mutual Fund and investment-management companies. This was not a good quarter for most of these companies, as markets and investors remained jittery in the face of the ongoing U.S./China trade war.

Even Guardian’s return to profitability isn’t as impressive as it looks because it comes from increases in the fair value of investments. These increases are thanks to a large chunk of BMO shares that Guardian received when it sold its mutual fund business to the bank in 2001. Guardian has diversified its holdings over time, but the BMO shares still account for about half the value of Guardian’s $674-million investment portfolio. In the quarter, the company’s investments gained $65.9 million in fair value vs a loss of $15.9 million a year earlier. Nevertheless, Guardian did report higher pre-tax income from operations year-over-year: $33.1 million vs $31 million.

Brookfield Asset Management Inc. also is significantly affected by changes in fair market value of its assets, but in its case, the assets are mainly hard ones such as real estate, infrastructure projects and renewable energy (although the firm also has private equity holdings).

Among the three big independent mutual fund companies, CI Financial Corp. continued to report heavy redemptions (more than $2 billion in the quarter), AGF Management Ltd. reported net redemptions of $104 million and IGM reported $153 million in net sales, which was far below the $1.4 billion the company reported in the corresponding period a year earlier.

Brokerages. Oppenheimer, which operates entirely in the U.S., reported a 67% increase in net income, while Canaccord’s earnings dropped by 49.1% and GMP Capital Inc. was in a loss position.

Holding companies. Dundee posted positive net income vs a loss a year earlier, as the value of its primarily resources-based investments increased. Capital Desjardins Inc.’s earnings declined by 20%, due to the loss reported by its P&C business. Power Financial also reported a decline in earnings, reflecting lower net income at both GWL and IGM. 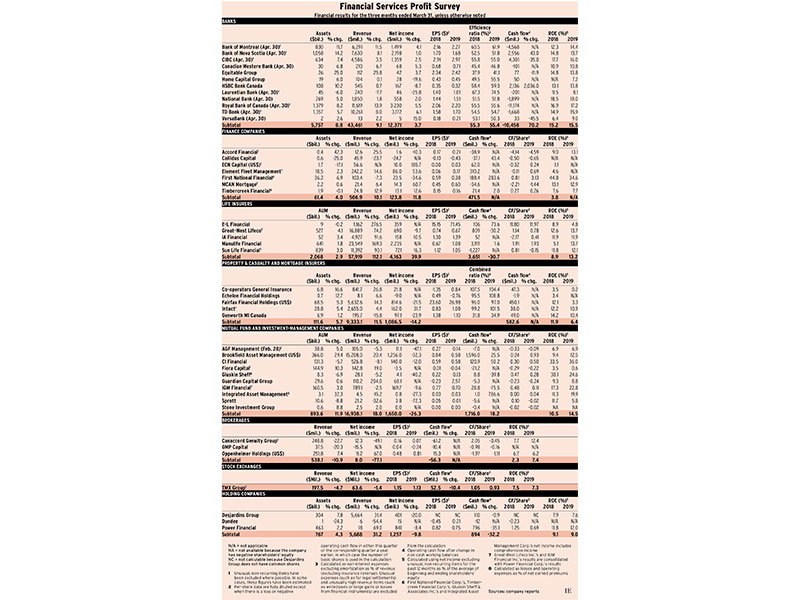 Deal for RegentAtlantic pushes CI past US$100B in U.S. assets

Earnings were boosted in part by efficiency gains